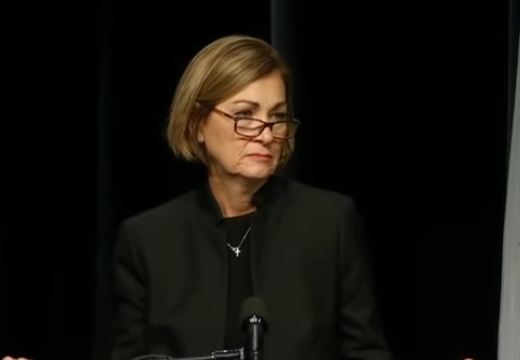 At televised news conferences, Governor Kim Reynolds often expresses appreciation for Iowans "doing the right thing" and helping our state get through the COVID-19 pandemic.

Her gratitude apparently doesn't extend to some 19,000 state employees, many of whom worked longer hours than ever this year, under extraordinary stress. The governor's offer to nurses, university staff, corrections officers, and others represented by AFSCME Council 61: no raise for the two years beginning on July 1, 2021.

AFSCME had requested a 3 percent raise for members of its bargaining units, the maximum possible under Iowa's 2017 law that eliminated most public worker collective bargaining rights. James Lynch reported for the Cedar Rapids Gazette that AFSCME's President Danny Homan went into a December 15 bargining meeting "with low expectations." Earlier this month, the state offered about 600 workers represented by the State Police Officers Council a 0.5 percent salary increase.

An attorney representing Iowa's human resources agency, the Department of Administrative Services, brought the governor's offer to the table: no raise whatsoever for AFSCME members. Many of them perform work that regularly exposes them to hazards including coronavirus. At least two Iowa corrections officers have died of COVID-19.

In a news release, Homan said Reynolds "should be ashamed of herself."

For months, the Governor has been talking about how appreciative she is of the hard work of state employees. She has said on numerous occasions how great of a job they have done. But words are cheap, and this contract proposal clearly states that her and her administration don’t care about public employees.

AFSCME's president also noted, “This isn’t a budgetary issue – the state is flush with cash even in the face of a pandemic." Reynolds' office boasted in September that the state ended the 2020 fiscal year "with a balance of $305.5 million in its General Fund" and "strong cash reserves of over $770 million."

Staff for the governor's office and Department of Administrative Services didn't respond to Bleeding Heartland's inquiries about the decision to offer thousands of state employees a pay freeze after what has indisputably been a difficult year.

“In spite of Governor Reynolds' failed leadership on COVID, our front line workers have put their own lives at risk and worked tirelessly to keep Iowans safe.

The Governor’s proposal does not honor the service or sacrifice of these dedicated public servants during the pandemic.

It’s the height of hypocrisy for Reynolds to give huge pay raises to those at the top during a pandemic, then freezing pay for those workers on the front lines every day.”

Iowa's State Medical Director Dr. Caitlin Pedati received a 45 percent raise in June, in violation of state policy, and Pedati's top deputy got a 28 percent raise in August. Bleeding Heartland is looking into other high-ranking state employees who have received large raises or bonuses this year.

DES MOINES – Today, AFSCME Council 61 President Danny Homan released the following statement regarding the Reynolds Administration’s Initial Contract Proposal for Fiscal Years 2022 and 2023. The two sentence proposal states that state employees would receive no pay increase for the coming two fiscal years, and includes no negotiation on permissive topics of bargaining such as overtime and grievance procedures.

The state’s proposal comes ten months into a pandemic where state employees have shouldered much of the burden of keeping Iowa moving.

“Governor Reynolds should be ashamed of herself. For months, the Governor has been talking about how appreciative she is of the hard work of state employees. She has said on numerous occasions how great of a job they have done. But words are cheap, and this contract proposal clearly states that her and her administration don’t care about public employees.

“These are people who have worked their tails off on behalf of Iowans. Nurses, residential treatment workers, and correctional officers have worked multiple double shift at times to protect the health and safety of Iowans. Workforce development employees have worked as much as 80 hours a week – often receiving no overtime - for several months to ensure Iowans get the benefits they need. Thousands more continued to show up while others stay home to maintain the services Iowans rely up.

“This isn’t a budgetary issue – the state is flush with cash even in the face of a pandemic. Rather, this is a slap in the face of hard-working public employees, and we are going to do everything we can to show these dedicated public servants the respect they have earned.”