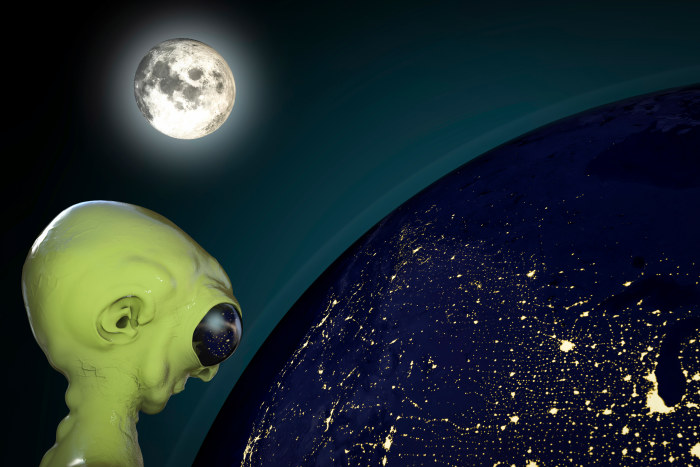 What follows is the complete transcript of those heretofore classified recordings.

"Greetings, distinguished leader of the Grand Assembly of the united planet Wwwvvsso. I am here to report on our project of the last four of the solar cycles of the planet known as Earth, which we have identified as the most agreeable planet for our colonization."

"Thank you, Explorer Rrrkkppa. We have only a few questions since you have done very well to annotate your experiments in understanding how the dominant species on planet Earth perceives reality. The implications could be profound for all Wwwvvssoians, as we seek to expand our galactic empire through military force. Now, then, briefly recap your findings."

"Gladly. We began approximately 30 Earth revolutions ago, when I and my team sought to identify an example of their species that could be capable of inducing enough Bioengineered Unalterable Lack of Luminescence so as to make them vulnerable to suggestion, therefore weakening their defense ability. Our subject would accomplish this by ascending to the highest level of power on their planet. We found such a subject, designated on their planet as Donald J. Trump.

"At first, we postulated that we would need to alter this test subject's neuromechanical ability to persuade others -- after all, we have never encountered a species that didn't require this intervention. However, this Trump possessed the highest Gravimetric Resonance Inspirational Facility Taxonomy quotient of any species we have ever encountered. Therefore, it needed no such alteration."

"You say that nothing you could do would enhance this Trump's natural GRIFT quotient beyond what was necessary to sow their species with BULL? But certainly, you would have had to manipulate others so as to elevate their reception, correct?"

"No, great leader-- and that's what first excited me! Yes, we anticipated that we would need to harvest millions of their species and perform that function in our lab. But this proved unnecessary when it was determined that their species possessed more than enough Syncopated Concurrent Attitudinal Mulitvaric receptors to match -- virtually at 100 percent! -- the subject's GRIFT transmission frequency."

"What followed were several planetary revolution cycles whereupon the Earth species was exposed to a great deal of our Trump subject, in their journalism and popular culture. Of course, very little of that was factual, again owing to the species' high number of SCAM receptors. As my report shows, tens of millions of their species in the largest nation on the continent designated North America registered a Cognitive Realization Acceptance Perceptivity index of minus 97 percent."

"I begin to understand. In mathematical terms, their CRAP index could be expressed as the equation: CRAP = SCAM x GRIFT?"

"Yes, great leader. But even that was not the most revealing part of our work!

"We were prepared to subject their species to the misperception techniques our medical professionals have perfected. But on this planet, they weren't necessary! That their species was inherently incapable of perceiving reality was proved when we manufactured Virus SARS-CoV-2 and introduced it into their atmosphere. Few of their species took the ridiculously obvious defense measures that would have incapacitated the pathogen within a few of their moon-rise cycles."

"We did notice that occasionally, it was possible for the species' accurate perception -- a dormant trait -- to re-emerge in their biocycle. But to counteract this, we simply introduced Selected Holistic Interference Telemetry into their culture."

"Yes, Explorer Rrrkkppa. I was amused to read the part of your report where you give as an example the disorienting effect of rapidly introducing and then disappearing throughout their planet your mass-produced monoliths. That was pretty good SHIT.

"So, without any exo-manipulation on your part, your team was able to almost totally manage the perceptions of this species so as to make them particularly vulnerable to our invasion force?"

"Yes, great leader. But ultimately, we have recommended against a military operation."

"Because, great leader, every conqueror needs a conquered population to perform what their dominators expect of them. Even though we identified this one nation as unable to perceive reality, there is a nation to their immediate north whose inhabitants have a high-enough Sequential Algorithmic Neorealistic Intuition Tomographical Yoke to resist us. Their SANITY quotient has proven a somewhat greater ability to resist CRAP."

"So, apparently, Explorer Rrrkkppa, you need to concentrate on another planet?"

"No, great leader. We believe the target species simply needs to be further disoriented from reality. We have a database of individuals that may accomplish this. They are designated as Lady Gaga, Kim Kardashian West, Justin Bieber, Mark Zuckerberg, Bernie Sanders and Rush Limbaugh."

"Thank you and get to work, Explorer Rrrkkppa. And better success in 2021."