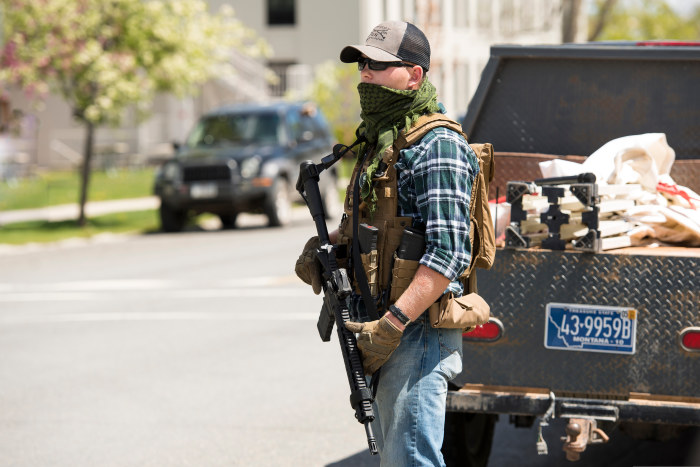 Guerrillas in our midst

Ira Lacher wonders, "Will America bring to bear on white-power domestic terrorists the same tools it hauled out to fight 'Muslim extremists' after 9/11?" -promoted by Laura Belin

Of course, no president has used it to justify his election and call for re-election. In his 2016 campaign and four-year reign of terror, Trump emitted enough dog whistles to stage his own Iditarod.

But until an organized, armed phalanx of militant white people pillaged the U.S. Capitol on January 6, threatening the vice president and Congressional leaders, the existence of a longstanding white-power militant movement escaped the myopia of most Americans.

Surely Americans, who are by our own fatuous self-definition fundamentally decent, would never attempt the unthinkable, no matter how angry. And so people who get paid to dither on television suddenly began talking at it, repeating again and again their disbelief, as if the arrival of this ugliness was as unexpected as an errant asteroid or alien invasion in a bad science-fiction flick.

But we knew. "If you look back far enough, there is a throughline, you could say, between America's history of white nationalism and a lot of our politics today," Ramtin Arablouei, cohost of the NPR podcast Throughline reported on a program aired last spring." On that program, The Atlantic staff writer Adam Serwer told NPR's Sam Sanders that our twice-impeached president simply stirred up a viscous brew that had simmered for decades:

"I would say there are certain ideas that were popular at the turn of the century during the last great immigration scare in America that have become more popular as they've been championed by Donald Trump, and he's reshaped the Republican Party in his image. The idea was that immigrants -- largely Jews and Italians, Greeks -- were diluting the original Nordic stock that had settled the United States, and the result was going to be a deterioration in American society. And what you see today is less of that pseudoscience per se, but what you do see is people arguing that immigration is fundamentally changing the nature of the country for the worse because these people are culturally alien in a way that makes them not belong here."

The movement surged with the 1968 candidacy of avowed white supremacist George Wallace (he won 46 electoral votes), and percolated in the 1970s and '80s by some disaffected Vietnam War veterans, including Louis Beam, a racist who joined the Texas Klan to fight civil rights "communists." In 1978, the William Luther Pierce novel The Turner Diaries served as a blueprint for a violent overthrow of America as a prelude to worldwide white supremacy. The movement now had a published manual.

Kathleen Belew, author of Bring The War Home: The White Power Movement And Paramilitary America, described the impact of the novel during a Throughline podcast in December 2020:

"[W]ith Turner Diaries in hand, white power activists are doing a whole bunch of violent activity in the '80s, ranging from obtaining a bunch of stolen military weapons and explosives and other material from army posts and bases, training in paramilitary camps, assassination plans -- some of which are successful, some of which are not successful -- smaller-scale bombings and burnings and attacks on infrastructure."

And large-scale acts, like the 1995 bombing of the Alfred P. Murrah Federal Building in Oklahoma City, which killed 168 people, injured hundreds and damaged 324 buildings.

Observers simply assumed that OKC was a lone-wolf undertaking by Timothy McVeigh and Terry Nichols, who were convicted of the mass murder in 1997. (McVeigh was executed in 2001; Nichols is in prison for life.) Belew's research didn't convince her that any such atrocities are isolated, however, and weeks before the January 6 insurrection at the Capitol, she expressed her fear on Throughline:

"What we're seeing is a string of events, a rising tide of activity, and one carried out by activists who are very deeply interconnected through social media and who are pushed by a number of historical factors towards radicalization. So I think we have to listen to the people in surveillance agencies who are sending up the red flag because these groups, again, are not fundamentally interested in the preservation of the United States and its democratic institutions. These groups are interested in the overthrow of the United States and its democratic institutions."

Although the white supremacist-in-chief has been disavowed by legions of his most prominent supporters, Belew is not convinced the danger is over, as she related January 15 on Code Switch, another NPR podcast:

"[O]ne part of our conversation, of course, should be about President Trump's accountability, about what this means for the Republican Party, about responsible action by Republican lawmakers. I think that's an important set of conversations, but I'm not at all sure that that's what these activists are interested in. I don't think this was a move to dictate the future of the Republican Party. I think this is a move to bring about civil war and instigate civil strife."

Top image: An armed militia member protests at the Montana state capitol building in Helena on May 20, 2020. Photo by Brandi Lyon Photography, available via Shutterstock.