This year’s redistricting will be be even messier than we thought.

The U.S. Census Bureau announced on January 27 the latest timeline for releasing various sets of results from last year’s census. They still do not have a hard deadline for when they will finish the granular data set that the Iowa Legislative Services Agency requires for new district maps. But Hansi Lo Wang of NPR reports that the Census Bureau is saying we “should not expect [that data] prior to July 30.” 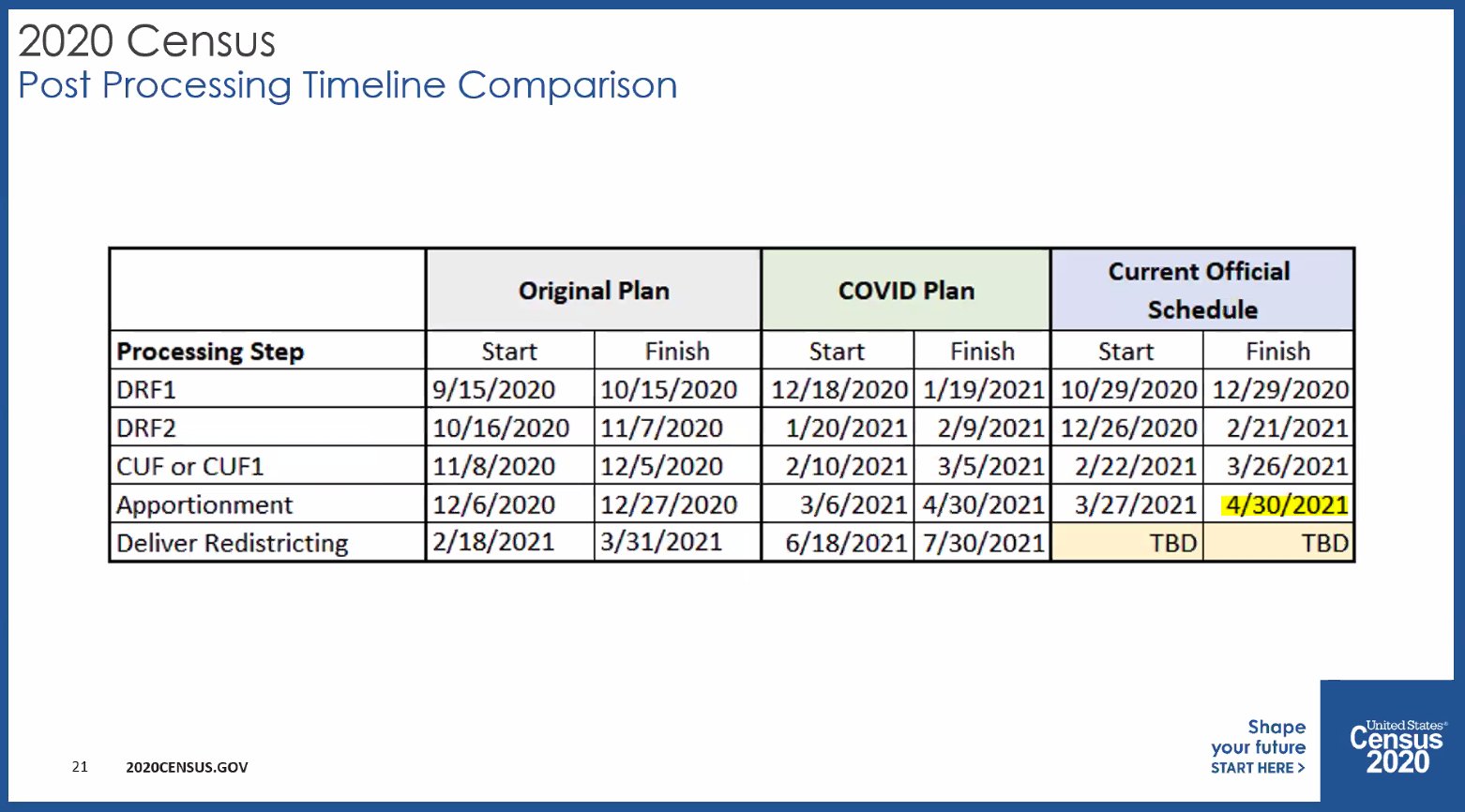 We now know for certain that the LSA will not be able to meet the usual deadline of April 1 for first-round district maps. But as Laura Belin pointed out here on Bleeding Heartland back in November, Iowa Code dictates what to do when the LSA receives the data late. If the LSA receives the data after February 15, “the deadline for submitting a plan to the Iowa House and Senate ‘shall be extended’ by however many days after February 15th the file arrived.”

That provision means that if the federal government releases population data on July 30 (166 days after February 15), the LSA’s new deadline to deliver first-round district maps to the legislature will be September 14 (166 days after April 1).

In spite of this bit of statutory foresight, this year’s delay presents two major problems.

First, the 2021 legislative session will be long over by September. Legislators will stop receiving their per diems on April 30, and the House and Senate typically adjourn for the year soon after that point. So even under the Census Bureau’s most optimistic timeline, we’re looking at a special legislative session just for considering the first proposed map.

But a more sticky problem is that Iowa Code Chapter 42 also dictates that the LSA must deliver third-round maps to the legislature by September 1. If the LSA doesn’t deliver even the first round of maps until September, that deadline is clearly impossible to meet. It’s probably impossible even if the LSA delivers first-round maps by mid-August, considering the robust debate we should expect over maps that will determine the state’s politics for the next ten years.

I’m no lawyer, but it seems to me there are four ways this statutory contradiction could play out:

The LSA might still manage to meet the September 1 deadline in spite of census delays. For this to happen, the LSA would have to finish first-round maps almost immediately after they receive the data on July 30, and then legislators would have to convene a special session immediately to start debate on those maps.

This option is certainly achievable, especially if the LSA is able to plan out some possible first-round maps with the partial data that the Census Bureau will release prior to July 30. Legislators will also likely be motivated to find out how their districts will change; every 10 years, some legislators of the same party are redistricted together and have to decide whether to move, primary each other, or retire. September is already late to make decisions like that, and if I were a legislator, I would be inclined to settle the maps as quickly as possible.

Legislators and the LSA could pretend the September 1 deadline doesn’t exist. We are in the mess because the Census Bureau blew past statutory deadlines. The powers that be in Iowa could choose to look the other way as well.

One potential bit of cover here is that the only problematic deadline is for the third-round maps. So if the legislature accepts the first- or second-round maps, code isn’t violated no matter how late those maps are approved.

UPDATE/CORRECTION: Redistricting is also governed by Article III, Section 35 of the Iowa Constitution, which reads in part:

Unlike Iowa Code, which can be changed with a regular bill passed through both houses and signed by the governor, constitutional amendments must be passed by two consecutive general assemblies and then approved by voters. Since the next general assembly won’t start until January 2023, there’s no way to complete that process in time to change this section of the Constitution this year.

So regardless of what legislators do, the constitution calls for the Iowa Supreme Court to draw the maps if the legislature hasn’t done so by September 15. That could make option 1 more likely. Legislators will still need a special session in late summer, but they have even more incentive to finish their business before September 15, when the maps will go to the Supreme Court.

Could the high court ignore the deadline as well? Possibly. The justices could allow the legislature to continue to work on maps after September 15, and later adopt what the House and Senate approved. Or conceivably the court could say that the September 15 deadline was impossible for legislators to meet, and therefore they choose not to exercise their constitutional authority to step in on that day.

Option 3: A deadline extension and no more

If Republican legislators want to formally give themselves more time, they can pass a bill extending the September 1 deadline by the same number of days as the deadline for first-round maps. Or they could remove that deadline entirely, and trust the LSA to do their job in a timely fashion.

Such a law would not fix the constitutional deadline, but could go hand-in-hand with an announcement by the Supreme Court that they don’t intend to step in on September 15.

Finally, the Republican majority could use this temporary problem as an opportunity to bring gerrymandering back to Iowa. Republican leadership is on the record saying they won’t change our redistricting process, and they already have the option to put their thumb on the scale by amending the third map.

But if any legislators do want to get rid of Iowa’s nonpartisan redistricting process, this year is probably the best chance they’ll ever get. Once the door is opened to debating the redistricting deadlines, what’s to stop the Republican trifecta from tweaking the process further to their advantage?

This year’s problems could prompt Republican leadership to use the specter of the Supreme Court taking over redistricting as an excuse to push for statutory changes to the process in the short term, and a constitutional amendment to make deeper changes in the long term.

What to watch for

Again, this is not a legal analysis, but from a political standpoint, it seems that legislative action to change at least part of Iowa’s redistricting process is vastly more likely than it was when Laura wrote her November article. One key thing to watch in the coming weeks is whether any bills to change Chapter 42 are introduced. A bill implementing Option 3 would of course be preferable to a bill implementing Option 4, but could still be amended to undermine the process as a whole.

Another thing to watch is how the Census timeline evolves. Again, July 30 was simply the latest estimate for data that was due back in December. The Census Bureau could run ahead of schedule, making Option 1 easier, or – more likely – they could fall even further behind, making Options 3 and 4 more enticing.

Article III, section 35 of the Iowa Constitution means that the Iowa Supreme Court is a third major player in this year’s redistricting, in addition to the legislature and the Census Bureau. As far as I know, no Iowa reporter has asked the state Supreme Court Justices what they intend to do if the legislature fails to meet the September 15 constitutional deadline.

That information would be very helpful in assessing which of the scenarios above is most likely. I would also be interested in feedback from lawyers on whether the Supreme Court is required to take over the process on September 15, or could choose to let legislators continue their work due to the much delayed census data.

No matter what legislators and the Census Bureau do, a special legislative session in late summer to handle Iowa’s next round of redistricting is all but guaranteed.

Evan Burger is a longtime political organizer who lives in Slater. He was the Iowa caucus director for Bernie Sanders’ 2020 campaign, and is now a partner at the progressive consulting firm Hegemony Strategies.