Herb Strentz reviews some of the demographic and political issues that threaten Iowa’s future role in the presidential nominating process. -promoted by Laura Belin

No doubt about it. Iowans benefit from the every-four-years caucuses on our preferences for candidates for the Office of President of the United States. (If you visit the Oval Office replica at the Truman Library in Independence, Missouri, President Harry S Truman will tell you the presidency is “the most important governmental office in the history of the world.”)

Iowa likely leads the nation on a per capita basis in terms of how many of us get a good look at those seeking that “most important office….”

But there have long been questions about whether the nation benefits from Iowa being a crucial step for those seeking to be president.

Ruminating about the Iowa caucuses called to mind a 1947 film, Magic Town. An opinion pollster, Rip Smith (played by Jimmy Stewart), finds a community whose opinions perfectly mirror U.S. opinions. But when the community learns this, it is so taken with itself — as in our news media cliché “Iowa is the center of the political universe” — its opinions become useless. By the way, the movie co-star, Jane Wyman, was married to Ronald Reagan at the time. 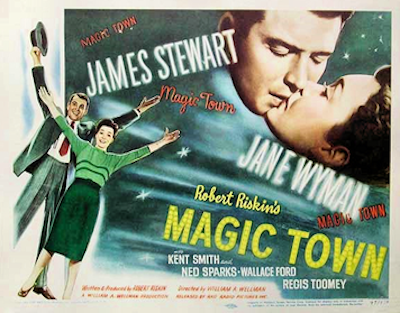 But back to Iowa: A year ago, after the 2020 caucus and the fuss raised about delays in letting the news media know the caucus results, Mike Wegner, retired from many roles at the Des Moines Register and Tribune, put it this way:

The real value of Iowa and New Hampshire should be that they provide a valuable shakedown period for campaigns outside the bright lights of the big city. The caucuses should be like those Broadway plays that opened in New Haven to work out kinks to avoid being pilloried by New York City theater critics. Iowa offers a low-cost and efficient way for campaigns to test messages, vet staff, polish delivery styles, and most of all, to listen to people – up close and personal – about their problems, hopes and dreams.

At times, Iowa has served that “real value” well — particularly in 2008 when a Black candidate won support from the largest share of Democratic caucus-goers in an almost all-white state.

Predictably, the first-in-the-nation status of Iowa is again being questioned, and its role will be on the agenda of the Democratic and Republican parties.

A criticism over the years is that Iowa, considered a rural state and surely a white state, is not demographically representative of the nation and therefore should not play a significant role in who becomes president. That point is somewhat countered by the dedication of Iowans in the role articulated by Wenger.

One anti-caucus argument is easy to knock down, but that doesn’t have much affect among those critics who say “Iowans want the caucuses because it brings so much money into the state.”

Dave Swenson, the well-respected Iowa State University economist, in 2008 published research showing that the economic impact of the caucuses upon Iowa was not much at all. A news account at that time reported,

[T]he 2008 caucuses added roughly $11 million and 230 jobs to the Iowa economy at a time when the state’s gross domestic product was $130 billion.

“Just a one-day swing in the corn prices just blows this thing out of the water,” Swenson said.

Swenson noted in a Bleeding Heartland commentary from 2015,

huge fractions of major spending by candidates are made outside of Iowa on behalf of their Iowa effort. Money for the non-stop ad buys by both candidates and their supportive PACs go to consultants or marketing specialists in other states who then purchase air-time from Iowa broadcasters. There is, however, no way to accurately track these indirect money routes and apportion spending to Iowa. Similarly, large fractions of campaign spending go to generate more campaign funds, which, again, flow to non-Iowa firms. Finally, all of the candidates have their main headquarters and the bulk of their employees outside of Iowa. […]

Same goes for estimating the spending by the media covering the candidates. Their spending, while perhaps meaningful to a degree, is primarily concentrated in Iowa’s major cities where the airports, rental cars, and base motels are located.

Swenson told this author in a recent email,

There is no evidence that the sentiments that I expressed then have changed much. Of course, there is much more dark money fueling ads, but as I said in my paper and in other posts…those ads are produced out of state, purchases by out of state organizations, and run on mostly investor-owned media that will (1) crowd out other, normal ads that would run at that time of year and (2) those outlets would not hire more people in the state to run those ads […]

Bottom line: the Iowa Caucus is nearly inconsequential economically to the state.  I’ve taken a peek again at the campaign spending filings by state since then (as has Brianne Pfannenstiel at the Register), and a surprisingly small fraction of spending accrues to Iowa or New Hampshire in the first half of the campaign season. Just like I found in 2008.

Economic issues aside, when it comes to Iowa demographics and state politics, criticism of the status of the Iowa caucus is on firmer ground. While Black people make up about 4 percent of Iowa’s population, they account for about 25 percent of Iowa prison inmates.

An April 2020 report of the American Civil Liberties Union noted, “A Black person in Iowa is 7.3 times more likely to be arrested than a white person for marijuana possession, even though both groups use marijuana at about the same rate.”

When it comes to state government actions, what happened in North Carolina five years ago might be relevant.

In 2016, that state’s legislature made life more difficult for LGBTQ people by regulating bathroom usage and making it illegal for municipalities to adopt anti-discrimination policies protecting one’s sexual orientation. The measure evoked outrage and threatened severe economic woes for North Carolina as companies canceled planned expansions in the state and the NBA and NCAA moved events to other states. Litigation followed and a federal judge approved a settlement in July 2019.

So welcome to the 2021 Iowa legislature, which offers this sampling of bills: several measures targeting the LGBTQ community, including a transgender bathroom bill with provisions similar to those that caused the North Carolina uproar; a proposed constitutional amendment that Iowans do not have a right to abortion or public funding for it; limited reinstatement of capital punishment; funds for private schools at the expense of public schools; and joining Missouri, Alabama, and Louisiana in going beyond Second Amendment protections, subjecting any restrictions on guns to “strict scrutiny.” And the session is barely a month old.

Further, Governor Kim Reynolds has lamented that Iowa did not join the Texas lawsuit intended to overturn the 2020 presidential election. Her responses to the COVID-19 pandemic are troubling as well.

Taken as a package, the direction of the legislature and the actions by the governor may give the Democratic and Republican parties reason to pause in continuing Iowa’s first-in-the-nation status.

Also, Iowa’s reputation as corruption-free was tarnished when in 2012 then State Senator Kent Sorenson accepted a $73,000 payoff  to switch allegiance from U.S. Representative Michele Bachmann of Minnesota for the GOP nomination to U.S. Representative Ron Paul of Texas.

In a lengthy Politico article, published after Sorenson served his prison term, Tim Alberta quoted the disgraced politician as saying,

“The caucuses are a curse on our state. It’s a corrupt fiasco that perverts the policy and the politics here. … It’s an environment that cultivates shady dealings. I got campaign contributions from every presidential candidate you can think of when I was in the legislature. They all send that money to Iowa legislators for a reason. It’s an honor to vote first in the nation. But our state would be better off without it.”

Reporting about other possible payoffs in 2015, a New York Times article asked, “Is Iowa for sale?”

Further, former Governor Terry Branstad’s son Eric has been criticized for, among other things, his handling of Donald Trump’s 2016 Iowa caucus campaign of Trump.

Still and all, perhaps having Iowa continue as “first in the nation” is preferable to what would happen if it were not. The political and ethical issues that beset Iowa are plentiful in the political process. Maybe no state could do better and many would do worse.