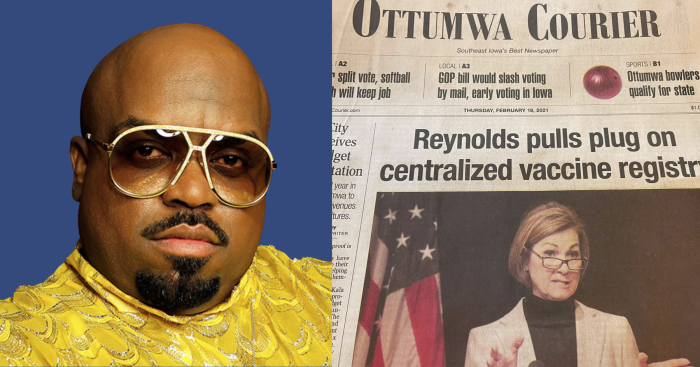 I still remember going to the doctor as a child. I was a skinny kid. I lived about 15 miles outside of Ottumwa on a gravel road in an area that used to be a tiny town called Ormanville. I was in the woods and running around our acreage every day, but I would get slammed with strep throat regularly.

So, off to the clinic in Ottumwa, just off Main Street on the south side of town, the doctor would prescribe an antibiotic and a day home from school. The other instruction? Take ALL the medicine. Don’t just take it until you are feeling better - take it the full ten days.

Now, like many other kids, I hated the taste of that medicine. It made my stomach feel gross, I would gag, and I would do about anything not to take it. But, my parents made me get it done. And I was better for it.

They listened to the doctors, and I got better, and now I’m a grown man that remembers to take his medicine.

It doesn’t seem like Governor Kim Reynolds has learned this introductory lesson when it comes to COVID-19 or a barely functioning vaccine distribution plan.

I was also the son of a school teacher and a middle-school attendance secretary. They went to work every day to help kids learn, get access to the resources they need, and prepare them for the big world and responsibilities they would face as adults.

Reynolds pushed students back into the classroom at full capacity, without a full vaccination plan in place. Teachers are struggling to get access to vaccines. Parents are caught between a rock and a hard place - protect their health (and their kids) or help further their kids’ social and mental development in a classroom.

Less mask-wearing. Less social distancing. And more disinformation in the dead of a harsh Iowa winter.

The Centers for Disease Control doesn’t think it’s a good idea. The Iowa Department of Public Health is still telling folks to wear a mask and continue social distancing. The governor ignores the doctors’ advice and tells people they don't have to keep taking their medicine before the illness has been fully treated.

Parents were making "school choices" this week knowing vaccines were being distributed, there was some kind of statewide mask order, and bars and restaurants were at limited capacity.

My wife and I weighed our kids’ options and chose to send our youngest back full-time.

We made that decision with the understanding that the outside world took at least some of the CDC and public health officials’ precautions to make the environment safer.

Now, Governor #CovidKim Reynolds has decided to yank the rug out from under us and told Iowa’s three million-plus residents that it’s OK (and encouraged) to start going back to the bar, restaurants, and other places where the virus runs rampant.

I’ll take these words from CeeLo Green and say, “Forget You," Governor Reynolds.

If this is making Iowa great, I would hate to know what the alternative is.