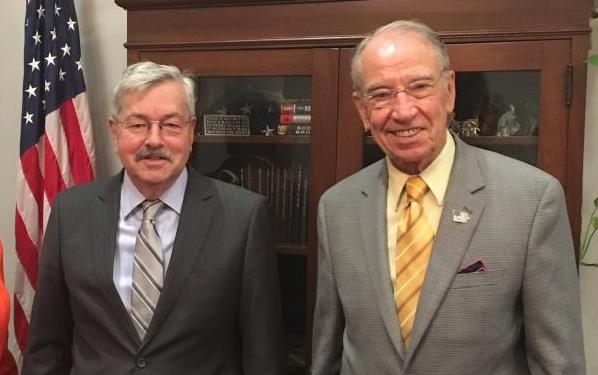 Herb Strentz: After a combined nine decades in elected offices, Iowa’s longtime senator and former governor are increasingly a liability to democracy. -promoted by Laura Belin

U.S. Senator Charles Grassley and former Governor Terry Branstad have served in elected offices for a combined 94 years. It really is time for Iowans to bid goodbye to them. The two have more than paid their public-service dues, but sadly are increasingly a drain on public confidence and a liability to democracy. The evidence of the latter includes their unconscionable silence when it comes to holding former President Donald Trump accountable and their implicit support of him.

Both Grassley, 87, and Branstad, 74, were around when the Iowa legislature merited praise. Now they insist on sticking around when the Republican Party needs new people to lead it back to being concerned about the fate of our state and nation instead of soothing Trump’s ego, downplaying his temper tantrums and thousands of lies, and catering to a lunatic fringe to help assure re-election.

Both grandly say they are willing to accept Joe Biden as President; both refuse to say Biden won the 2020 election fairly.

The most recent evidence of Branstad’s need to say goodbye was in a 7-minute interview with Christiane Amanpour of CNN, warranted in part by Branstad’s tenure in elected office and then service as Trump’s ambassador to China. Bleeding Heartland editor Laura Belin wrote previously about that interview, which merits still more attention because it is so mind-boggling.

And a letter to the editor in the Register carried a headline of considerable understatement: “Branstad disingenuous in TV interview.” See for yourself how Branstad bragged about himself, promoted the Iowa caucus, and never responded to an Amanpour question.

Terry Branstad was former President Trump’s Ambassador to China and campaigned for his re-election in 2020. Is he not concerned by Trump’s disregard for American democracy? Branstad won’t say – nor will he concede that Biden won the election fairly. pic.twitter.com/e9KmhCYB9V

In ducking questions about Trump’s spurring on the Jan. 6 riot at the nation’s Capitol, Branstad cited what Ronald Reagan–in his 1966 campaign for governor of California–called the 11th commandment: Thou shalt not speak ill of any fellow Republican.

Really? Taken literally, which is how Grassley and Branstad take it, the 11th commandment scorns the U.S. Constitution and its provisions for three branches of government and a system of checks and balances. The 11th commandment literally calls for loyalty to a political party and not to the common good — loyalty to a lunatic fringe that adopts your party’s label regardless of damage done to the nation.

After all, Pate had been honored by the National Association of Secretaries of State in 2019 for his work on election cybersecurity to help assure fair elections.

Mission accomplished, or so Pate may have thought.

His analysis of the 2020 elections in Iowa and across the nation: “Record turnout during a pandemic is an amazing achievement and overall, the process went very smoothly in Iowa. Also, huge thanks to our state and federal partners for helping us provide safe and secure elections.”

Nevertheless, the GOP majorities in the Iowa legislature, ignoring Pate, passed more voting restrictions under the guise of election reform, to continue to give credence to lies about the outcome of the 2020 presidential election — a point recognized by Randy Evans, executive director of the Iowa Freedom of Information Council.

The legislation is about as off key as was Chuck Grassley’s August 2015 assessment of Trump’s business acumen, not mentioning the six bankruptcies Trump had filed for.

“I do think that being an outstanding businessman like he is,” Grassley said at that time, “that he would have the capability of being a good chief executive.

Despite their dedication to Iowa, Grassley and Branstad leave a legacy that includes Governor Kim Reynolds and the Iowa legislature now bumbling their way through one of the worst periods of Iowa governance in the state’s history.

At least that’s what I think. As you know, the Trump cult worships people who say what they think.

May I hear an Amen! 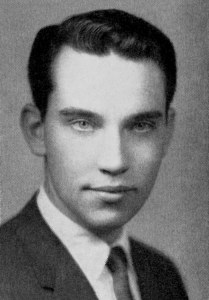 Here is Terry Branstad’s official photo from 1973, his first year serving in the Iowa House. 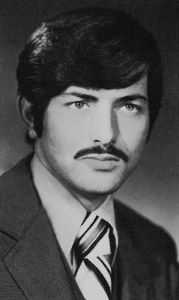