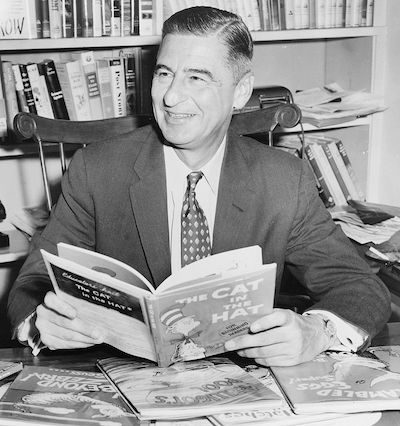 Ira Lacher weighs in on the controversy of the week. -promoted by Laura Belin

It seems that back in the mid-twentieth century, when too many Americans believed the world consisted solely of good, smart, credible white people and everyone else, Theodor Seuss Geisel wrote a couple of books for children, And to Think That I Saw It on Mulberry Street in 1937, and If I Ran the Zoo in 1950.

Because of what Americans believed, and because Geisel was an American, those books have items that “portray people in ways that are hurtful and wrong,” Dr. Seuss Enterprises, the late author’s business estate, said in a statement released Tuesday, March 2, Geisel’s birthday.

The statement went on to say that along with “a panel of experts, including educators,” it reviewed all of the beloved author’s books and, being “committed to action,” will cease publication of the offensive titles, including McElligot’s Pool, On Beyond Zebra!, Scrambled Eggs Super!, and The Cat’s Quizzer. (As of the morning of March 3, those links were still active on Amazon, although I wouldn’t bet on how long.)

What’s next for those and other books? Bonfires?

I hate to say it when the right is correct, but I’ll say it now: Cancel culture has gone too far.

Yes, persons should be held accountable for thoughts, actions, and statements that intend to inflict harm, physical, psychological, and otherwise, on others. But we have utterly lost our ability to compartmentalize those thoughts, actions, and statements. We equate alleged inappropriate sexual conduct by a sitting governor with a book for children, written almost three generations ago, that contains a character who, as The New York Times reported, “described as ‘a Chinaman’ [who has] has lines for eyes, wears a pointed hat, and carries chopsticks and a bowl of rice.”

We also overreact to or simply take out of context occurrences that we assume have the worst intentions in mind. Such as the Smith College janitor who reported to campus authorities an African American student who was eating in a building closed for the summer. The student accused the janitor and the school of racism, the school apologized, and the janitor’s life was effectively ruined.

Although celebrities are squarely in the crosshairs, it seems that no one is immune. The San Francisco school board recommended renaming 44 schools containing the monikers of former presidents George Washington, James Monroe, Abraham Lincoln, Herbert Hoover, as well as Paul Revere and Robert Louis Stevenson. Oh. Lincoln’s home state, Illinois, is considering likewise action.

Where does it stop?

Yes, persons have conjured up thoughts, committed actions, uttered statements, and proliferated ideas intended to delegitimize groups of people. We just got done with four years of such a person who happened to be president.

But must we always scream j’accuse at persons whose only apparent crime was being too oblivious to understand the hurt or too reticent to challenge it? Can’t we use these revelations as a teaching moment? And judge a person as a complete loaf of bread instead of a single slice?

Bill Maher, no friend of the right, said it best. On his “Real Time” show of February 26, the HBO commentator editorialized, to enthusiastic applause:

“Liberals need a ‘stand your ground law’ — for cancel culture. So that when the woke mob comes after you for some ridiculous offense, you’ll stand your ground. Stop apologizing. Because I can’t keep up anymore with who’s on the shit list. … Cancel culture is real, it’s insane and it’s growing exponentially.”

“Think about everything you’ve ever texted, emailed, searched for, tweeted, blogged or said in passing. Or now, even just witnessed. Someone had a Confederate flag in their dorm room in 1990 and you didn’t do anything? You laughed at a Woody Allen movie? Andy Warhol was wrong — in the future everyone will not experience 15 minutes of fame but 15 minutes of shame. … Mature people understand humans are continually evolving, as opposed to Wokeville, where they’re always shocked we didn’t emerge enlightened from the primordial ooze.”

He concluded: “Memo to social justice warriors: When what you’re doing sounds like an Onion headline — stop.”

Because I can’t wait for what they’re going to do to Goodnight Moon.