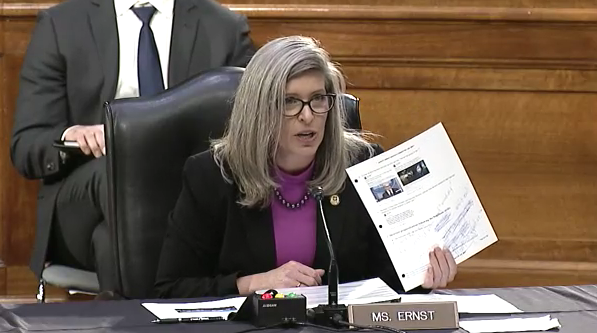 This week the junior Iowa senator announced her opposition to another Biden pick: Colin Kahl for undersecretary of defense for policy. Kahl’s more than qualified for the position. The sticking point for Ernst and many of her Republican colleagues was a surprising one for anyone familiar with former President Donald Trump’s social media presence.

Senator Jim Inhofe of Oklahoma, the ranking Republican on the Senate Armed Services Committee, set the tone early in Kahl’s March 4 confirmation hearing. Inhofe raised concerns not only about Kahl’s foreign policy views but also about his “hyper-partisanship.”

Senator Tom Cotton of Arkansas quoted tweets in which Kahl had sharply criticized Trump and his Republican enablers. “I fear your intemperate manner will create an equally toxic environment inside the Pentagon,” Cotton said piously, wondering how Kahl could he do the job he’s nominated for, “having so deeply poisoned the well.”

After expressing remorse for using “sometimes disrespectful” language on social media, Kahl said he had a “long track record” of service in non-political roles. He worked in the George W. Bush administration and under Defense Secretary Robert Gates, a Republican whom President Barack Obama left in charge at the Pentagon.

Somehow managing to keep a straight face, Cotton scolded the nominee: “Some of these tweets happened in the middle of the night, when presumably you were sitting at home reading the news.” Pretending Trump’s late-night Twitter rants didn’t exist, Cotton went on: “If this is the way you respond to mere policy disagreements when you’re sitting at home reading the news, I do not think that you’re fit to sit in the Pentagon and make decisions about life and death.”

Democratic Senator Mazie Hirono of Hawaii ridiculed committee Republicans who attacked Kahl’s use of Twitter but “didn’t say anything about the lying, racist tweets from the former president.”

Speaking immediately after Hirono, Ernst was undeterred. She dove right in with concerns about Kahl’s “social media and other commentary.” I pulled this clip from the last portion of her remarks; to watch from the beginning, go to the 1:32:00 mark of this video.

Ernst disagreed with Kahl’s views on the multilateral nuclear deal with Iran–a reason she cited in voting against other Biden nominees. But in closing, the senator hammered “exaggerated views” and “incendiary remarks” Kahl had posted on Twitter.

She was particularly upset about a 2018 tweet in which the nominee used hyperbole (“we are going to die”) to convey his view that John Bolton posed a national security threat.

Ernst mentioned her past military service in the Middle East and noted that her daughter’s on track to serve in the Army. Military personnel “deserve someone that will take a serious outlook to policy and not put this kind of garbage out in front of the American public,” she concluded, holding up a printout of Kahl’s tweets for dramatic effect.

Trump’s often unrestrained tweets reached a worldwide audience of tens of millions. It doesn’t get much more “exaggerated” than the president claiming “No politician in history […] has been treated worse or more unfairly,” or tweeting that he’d “done more for the black community than any president since Abraham Lincoln.” Yet Ernst never suggested Trump was unfit to serve as commander in chief.

It doesn’t get much more “incendiary” than Trump tweeting, in the middle of the armed insurrection at the Capitol, that Vice President Mike Pence “didn’t have the courage to do what should have been done to protect our Country and our Constitution.” Yet Ernst hardly touched on the former president’s behavior when explaining her vote to acquit him last month.

Why “garbage” tweets are disqualifying for a Democratic undersecretary of defense–or a budget director–but not for a Republican president is a mystery Iowa reporters should ask Ernst to unravel on her next conference call. But it’s arguably not even the biggest double standard the senator has promoted this week.

On her own social media feeds, Ernst has been attacking Democrats for drafting a COVID-19 relief package that would supposedly let “jobless MILLIONAIRES to access enhanced unemployment benefits.” This after she voted for enormous tax cuts skewed toward the wealthiest Americans, and hailed agriculture bailouts that went primarily to the richest farmers.

Like they used to say on progressive blogs in the 2000s, “IOKIYAR” (it’s ok if you’re a Republican).

The angels standing behind survivors of crime
By Lushari | 0 Comments