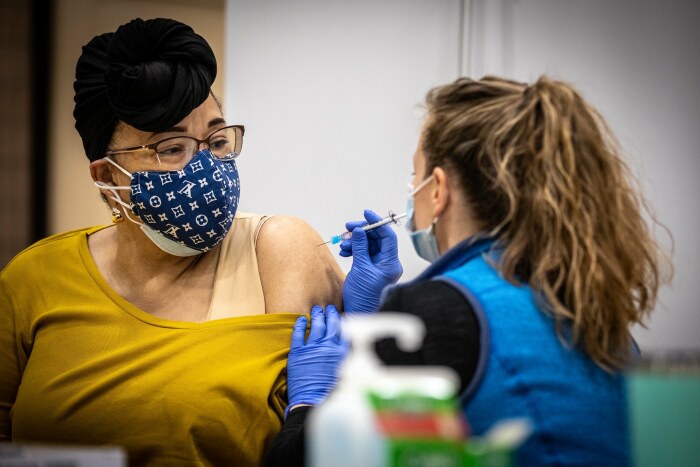 At least 263,000 Iowans have received both shots of a COVID-19 vaccine, and more than 864,000 doses have been administered to Iowa residents, according to the state’s official vaccination dashboard on March 7.

Yet people of color continue to be vaccinated for coronavirus at far lower rates than white Iowans. The disparities have widened since Bleeding Heartland reviewed the numbers in early February.

Sara Anne Willette’s Iowa COVID-19 Tracker website continues to provide daily updates on a wide range of data, including some that can’t be found on the state’s Coronavirus.Iowa.gov. For instance, the state’s vaccine information page shows that as of March 7, white people had received about 80.4 percent of doses administered, people of unknown race 15.6 percent, Black Iowans 0.99 percent, Asians 0.82 percent, American Indian or Alaska Native 0.16 percent, and Native Hawaiian or other Pacific Islander 0.05 percent.

Similarly, Iowans with no Latino ethnicity have received about 78.2 percent of vaccine doses, Latinos 1.29 percent, and Iowans of unknown ethnicity 20.5 percent.

It’s not surprising that most COVID-19 vaccine doses would go to white people in a state where about 90 percent of residents are white. To get a sense of possible disparities, you need to look at vaccine doses per capita for different racial or ethnic groups. Willette crunches those numbers. Her latest calculations, based on data downloaded on March 6, show the following;

Four weeks ago, the data showed Black Iowans had received less than half as many doses per capita as white people. Now the disparity is more than 3 to 1.

Four weeks ago, Native Hawaiian or Pacific Islanders had received about 60 percent as many doses per capita as white Iowans. Current numbers show they have received less than half as many doses.

Four weeks ago, the data showed Latinos were receiving a little less than a third as many vaccines, relative to their share of Iowa’s population, compared to non-Latino Iowans. Now the disparity is 4 to 1.

The last time Bleeding Heartland covered this topic, a number of readers speculated that racial disparities stemmed largely from Iowa’s early targeting of vaccinations for health care workers and nursing home residents, a group at elevated risk of severe illness or death from COVID-19.

At the beginning of February, Iowa began vaccinating people in the next priority groups (those over age 65, first responders, educators or school staff, and child care workers). The average age of people in Iowa’s communities of color is lower than the average for white people.

As we are still relatively early in the vaccine administration process, we know that much of the population receiving the vaccine in Iowa are older, and those Iowans [are] disproportionately white. Phase 1A focused on long term care residents and health care personnel, and Iowans age 65 and older make up a large portion of Phase 1B. We expect to see other demographic numbers increase as we expand into subsequent phases.

did recommend that as local public health agencies and vaccine providers plan for limited use of vaccine among Phase 1B populations, that they consider applying health equity considerations when prioritizing eligible populations. Considerations should include, but are not limited to access to health care, disparate health outcomes, socioeconomic status, insurance coverage, etc.

According to Ekstrand, the state public health agency “is seeking input from community representatives statewide who are helping us tailor our vaccine messaging and communication methods to target and racially and ethnically diverse Iowans, as well as addressing vaccine hesitancy themes.”

The Iowa Department of Public Health announced on March 4 that people under age 65 “with medical conditions that are or may be an increased risk of severe illness from COVID-19” would be able to schedule vaccinations, effective March 8.

Research has suggested that people of color have higher rates of hospitalization or severe COVID-19 illness due to many factors. In a February 2021 report that showed significantly higher hospitalization and death rates for Black, Latino, and American Indian people, compared to whites, the U.S. Centers for Disease Control noted, “Race and ethnicity are risk markers for other underlying conditions that affect health including socioeconomic status, access to health care, and exposure to the virus related to occupation, e.g., frontline, essential, and critical infrastructure workers.”

On the other hand, greatly increasing the number of Iowans who can receive a shot could benefit those who already enjoy more access to health care. Older Iowans with reliable internet access, or relatives who could navigate the system for them, were better able to obtain vaccine appointments than elderly people who tried to schedule by phone.

County public health officials, who received less than ten minutes’ notice before the state announced Iowans under 65 would be eligible for COVID-19 vaccines, have expressed concern that the new policy would impede their efforts to reach those in the higher priority groups. In the coming weeks, younger Iowans with high-speed internet and the ability to stalk websites at all hours of the day or night may crowd out those with lower incomes, who have the same underlying conditions but work two or three jobs or can’t afford internet at their homes.

One state initiative could directly address the disparate vaccination rates. The public health agency announced on March 1 that it would send 25,600 doses of the newly-approved Johnson & Johnson vaccine to areas with workforces that are disproportionately affected by the pandemic.

IDPH will direct the Johnson & Johnson vaccine allocation to 17 Iowa counties (listed below) with significant Phase 1B, Tier 2 populations, who are frontline essential workers in food, agriculture, distribution, and manufacturing sectors and who live or work in settings that make social distancing unfeasible. This approach will ensure that local public health can coordinate with employers on the quick administration of COVID-19 vaccine to essential workforce who have been disproportionally affected by the virus. Johnson & Johnson’s vaccine requires only one dose and can be stored at normal refrigerator temperatures, making it less logistically complex to handle and administer.

Johnson & Johnson’s vaccine was shown to prevent hospitalization and death in clinical trials 100% of the time, and 85% effective at preventing severe illness from the virus. […]

Those counties contain most of Iowa’s large meatpacking plants. Huge coronavirus outbreaks in food processing facilities last April and May contributed greatly to Iowa’s early racial and ethnic disparities in infection rates. So prioritizing employees in those sectors to receive the Johnson & Johnson vaccine is sound policy.