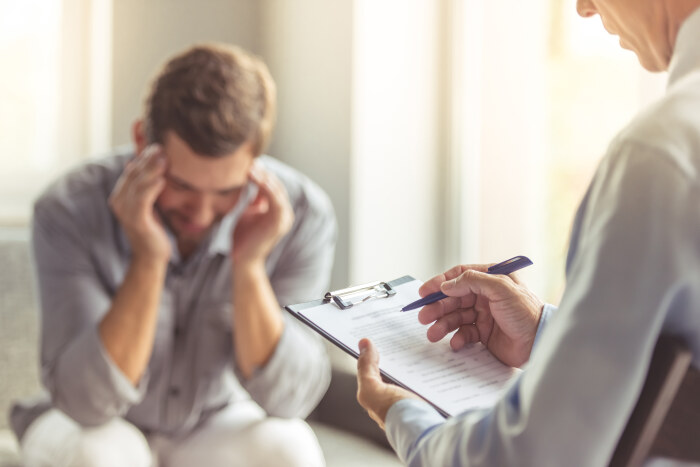 Ira Lacher considers whether "the only way to heal is to treat our society the way we would treat traumatized individuals: small-group therapy." -promoted by Laura Belin

America has a mental health crisis.

Not the type conservatives insist makes someone turn a movie theater, shopping mall, or hotel parking lot into a kill zone. A mental health crisis that is contributing to a monumental, perhaps unprecedented loss of ability to connect with reality. The reason is extreme trauma on a national scale.

Psychiatrists agree that trauma frequently manifests itself in exhaustion, confusion, sadness, anxiety, agitation, numbness, dissociation, and confusion. A top coping mechanism is denying reality. "If you're in denial," the Mayo Clinic tells us, "you're trying to protect yourself by refusing to accept the truth about something that's happening in your life."

That truth, in American life, is the jack-hammering of bedrock beliefs so many of us grew up with: America is the greatest, richest, most powerful, most benevolent nation in human history; a father can comfortably provide for the entire family; and our religious teachings assure us of how human beings are supposed to function.

But over the last fifty years, America has lost a major war to a small southeast Asian country, seen terrorists reduce some of our mightiest structures to rubble, and been laid helpless by a mindless yet relentless microbe. Good-paying jobs that assured comfortable, fulfilling lives, and dignified post-work chapters have vanished by the tens of millions. Our communities, which depended on those jobs, have disintegrated, or become inhabited by people who don't look or speak like us. And humans don't always function the way our sacred texts tell us they should.

Even the Civil War, which wrenched the Union apart, wasn't rent in so many ways at the same time.

To cope, millions have retreated into the Lethe of substance abuse. Many more have simply retreated from reality, which we see in our discourse. We don't talk about how to keep safe from violence; we just surrender to tens of millions of us carrying lethal weapons. We don't discuss how to assure each other we won't infect them with a deadly disease; we simply shriek about our freedoms under siege. We don't examine how to prevent our planet from becoming uninhabitable; we merely deny it's happening.

How do we heal this trauma?

In 2016, Thomas Hübl, who has lectured around the world on the subject of collective trauma, co-founded the Pocket Project with Yehudit Sasportas. The nongovernment organization works with entities around the world to study collective trauma in society and educate health professionals and civic leaders in how to deal with it. Far from being considered a New Age weirdo, Hübl has been called on to work with such renowned organizations such as Harvard Medical College and the U.S. Congress.

Last year, Hübl and Julie Jordan Avritt published a book, Healing Collective Trauma – A Process for Integrating Our Intergenerational and Cultural Wounds, last year. In it, they assert that the only way to heal is to treat our society the way we would treat traumatized individuals: small-group therapy. "We need to come together, beginning in small groups, to acknowledge our pain, to share our anxieties, in a nonpoliticized, nonthreatening manner," Hübl says.

It is a task that each of our entities -- our work groups, our places of worship, even our extended families -- must undertake, and in a massive way.

The feelings, thoughts, and words, that emerge may be difficult to endure, but we must. Only when we know what others are feeling, and why they are feeling so, can we begin to say, "Now, we can begin to heal."

For Democrats, healing means refusing to rise to the bait of Republicans, who would rather gain political hay by picking fights with "the libs" and calling them on their reactions than governing. It means ratcheting down the rhetoric.

Mostly, it means paying close, close attention to what has driven so many Americans into denial -- vanishing American ideals -- and providing real, workable solutions. It means seeking out those who have not yet succumbed to trauma-induced delusion and talking with them, guided by the lyrics of the 1967 hit song "Reach Out of the Darkness":

"I knew a man that I did not care for / And then one day, this man gave me a call / We sat and talked about things on our mind / And now this man, he is a friend of mine."

If you think this is just typical Summer of Love schmaltz, and you believe that the entire far right is composed of intolerant fact deniers who deserve to be institutionalized for their own good, you may want to examine how you consider mental illness. Because that's what this is all about, on a societal scale. The type of mental illness that deserves to be treated, not scorned.