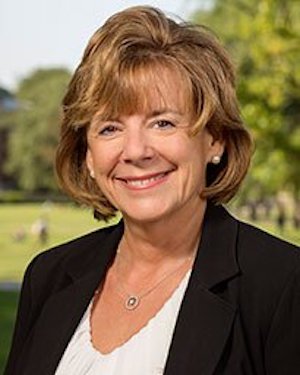 Mercifully, history did not repeat itself on April 30, when the Iowa Board of Regents selected Barbara Wilson to be the next University of Iowa president. Wilson is supremely qualified for the job, having served for the last six years as the second-ranking administrator at the University of Illinois system, and in several leadership roles at the Urbana-Champaign campus. A news release enclosed in full below describes her relevant experience.

All four finalists considered this year were far more qualified than outgoing president Bruce Harreld was when the Regents picked him in 2015, following a search marred by favoritism and secret meetings that appeared to violate Iowa’s open meetings law.

Whereas the Faculty Senate voted no confidence in the Board of Regents after Harreld was hired, and the Daily Iowan newspaper ran the front-page headline “REGENTS’ DECISION CONDEMNED,” reaction to Wilson’s hiring was overwhelmingly positive from students and faculty. The Daily Iowan’s editorial board had endorsed either Wilson or Georgia State University Provost Wendy Hensel as the best choices to take the university forward.

I was pleasantly surprised the Regents tapped Wilson, even though she fired a football coach and an athletics director at Illinois over scandals including alleged mistreatment of student-athletes. During Harreld’s tenure, Iowa’s Athletics Director Gary Barta continued to receive raises and a contract extension even after costing the university millions of dollars in lawsuits over discrimination and a hostile work environment.

Wilson’s starting salary will be $600,000, with $400,000 annually in deferred compensation. The Regents offered Harreld a starting salary of $590,000 in 2015, which was $65,000 more than his predecessor Sally Mason was making after eight years as president. Arguably, given her qualifications, Wilson should have been offered more; Harreld’s starting salary is equivalent in purchasing power to about $659,000 today. On the other hand, Wilson’s deferred compensation plan is twice as large as Harreld’s was when he was hired.

The Daily Iowan noted that Wilson will be the third woman president of the university. Mary Sue Coleman broke that glass ceiling in 1999 and served until 2002, when she left to become president of the University of Michigan. Mason held the position from 2007 to 2015.

Wilson said she is committed to making sure women and people of color assume leadership roles within UI, such as deanships, which often act as pipelines for presidential positions.

“I think I carry a special responsibility to think about leadership more broadly than it has often been thought about of in these institutions, and I’ll take that very seriously,” she said.

Appendix: April 30 news release from the Iowa Board of Regents

Wilson brings extensive leadership experience to her role as UI president. Since 2016, she has served as executive vice president and vice president for academic affairs for the University of Illinois System, which enrolls more than 90,000 students across three main campuses and includes a 462-bed hospital. Before that, she served one year as interim chancellor for the Urbana-Champaign campus, a top-ranked land grant research institution with more than 45,000 students and nearly 2,000 tenure-track faculty.

Wilson, 63, will succeed Bruce Harreld, who served as Iowa’s president from November 2015 to May 2021. Harreld announced in October 2020 his intent to retire. John Keller, UI associate provost and dean of the Graduate College, will serve as interim president after Harreld’s last day on May 16 until Wilson begins.

Wilson’s research interests include the social and psychological effects of the media. She is co-author or co-editor of four books and has authored more than 80 research articles, book chapters, and technical reports.

Before joining the Illinois faculty in 2000, Wilson was an assistant professor at the University of Louisville for three years and a faculty member at the University of California, Santa Barbara (UCSB) for 12 years. She also spent eight years as director of graduate studies in UCSB’s Department of Communication.

Sandy Daack-Hirsch, UI associate professor and interim executive associate dean of the College of Nursing, and Keller served as co-chairs of the 21-member search committee charged with recruiting and vetting applicants for the position. Professional consultant AGB Search guided the recruitment process at the direction of the Board of Regents.