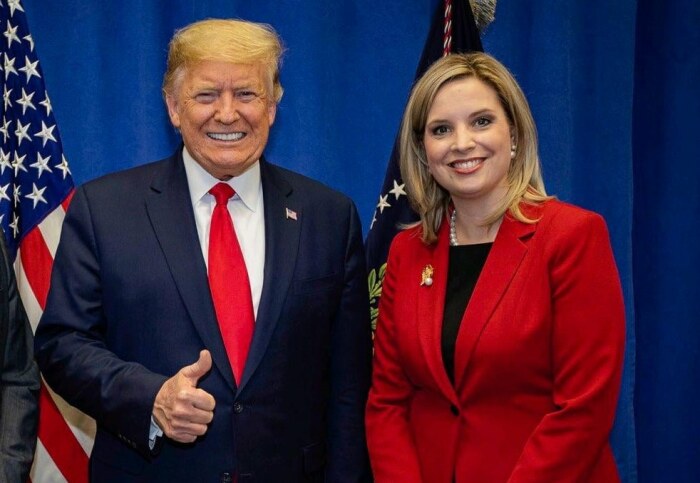 The Federal Election Commission (FEC) voted unanimously on May 6 “to recommend that Congress ban political campaigns from guiding donors by default into recurring contributions through prechecked boxes,” Shane Goldmacher reported for the New York Times. It was a rare moment of bipartisan agreement for a commission that usually deadlocks on campaign finance regulations and enforcement.

Bleeding Heartland was first to report that the campaigns of Governor Kim Reynolds and and U.S. Representative Ashley Hinson (IA-01) are using the same practice.

Trump’s three appointees to the FEC joined Democratic colleagues in approving the legislative recommendation, which noted that many donors have told FEC staff they “do not recall authorizing recurring contributions.”

“The Commission’s experience strongly suggests that many contributors are unaware of the ‘pre-checked’ boxes and are surprised by the already completed transactions appearing on account statements,” its recommendation said.

Representatives for Hinson did not reply to Bleeding Heartland’s inquiries about whether the campaign will continue the practice. As of this morning, clicking through from a link shared on Hinson’s political Twitter feed takes supporters to a WinRed page with two boxes pre-checked. One defaults the donor into monthly contributions, and the other agrees to an additional one-time gift, currently set for May 15. Trump’s campaign pioneered that “money bomb” technique in the summer of 2020.

Money donated to Hinson through this page will be shared with the campaign of Representative Elise Stefanik, the rising star and Trump loyalist who is set to become the third-ranking U.S. House Republican. 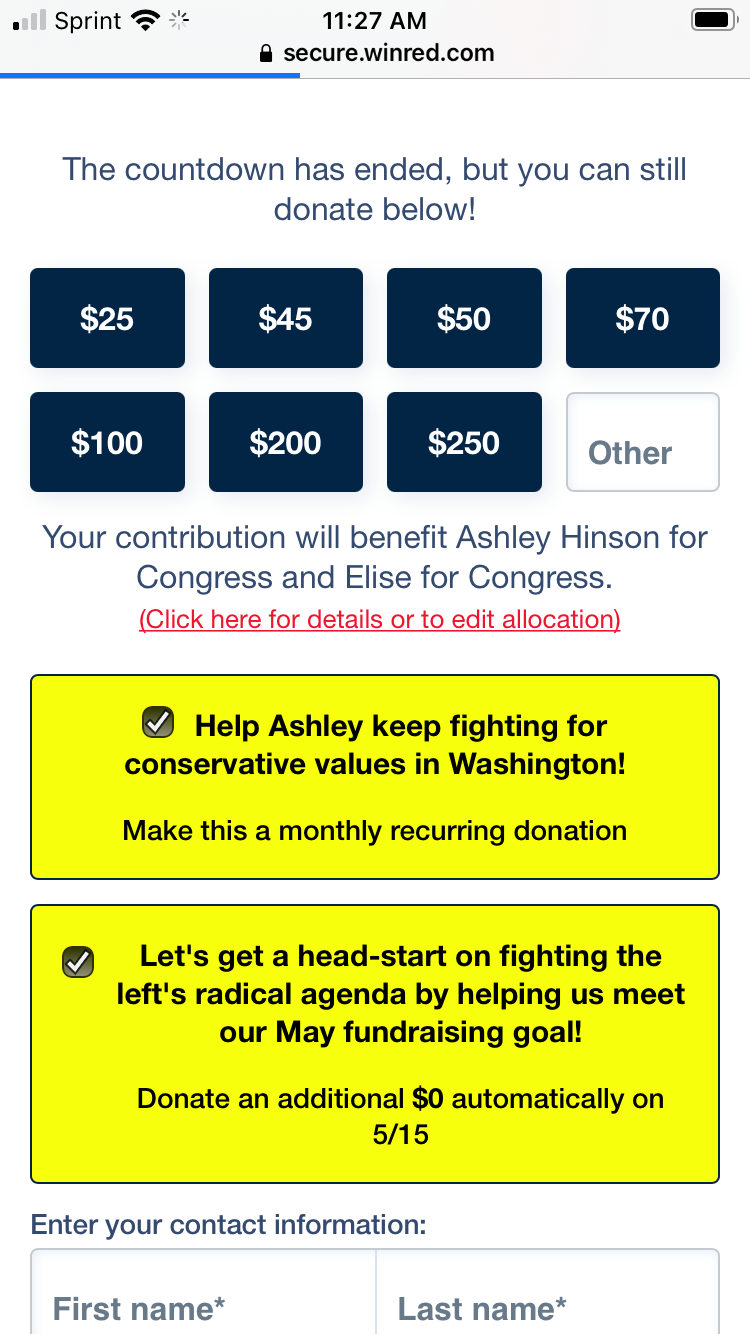 Any regulation approved by Congress and signed by President Joe Biden would apply to federal candidates and committees. Iowa law sets campaign finance rules for state candidates. I’m seeking comment on whether the Iowa Ethics and Campaign Disclosure Board has considered any recommendations regarding this fundraising practice.

This morning, Bleeding Heartland confirmed that the Reynolds campaign is still using the pre-checked boxes on some donation pages. The governor’s campaign did not respond to questions submitted by email following the FEC’s vote on May 6. 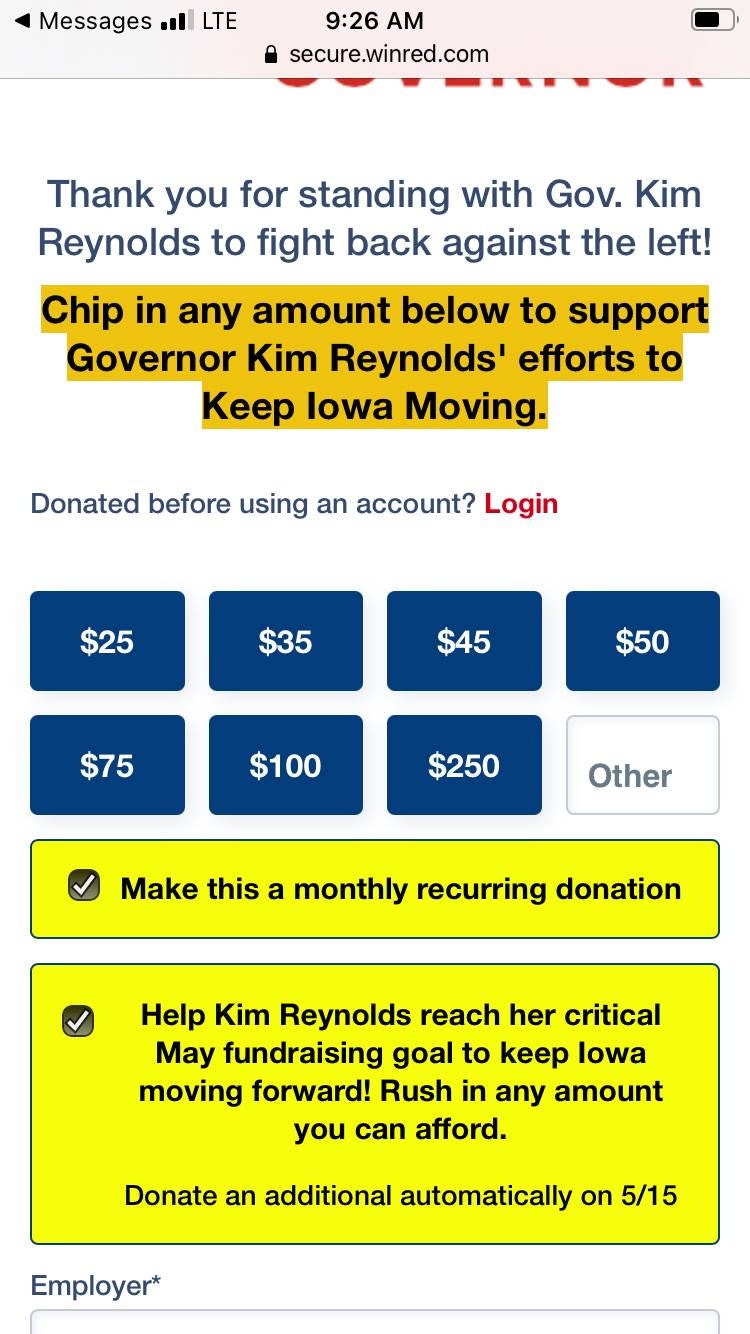 According to Goldmacher’s latest article, the leading platform for Democratic political fundraising “has said it is phasing out prechecked recurring donation boxes, although two of the most important Democratic groups ahead of the 2022 midterm elections, the Democratic Senatorial Campaign Committee and the Democratic Congressional Campaign Committee, continue to deploy the tool.” My reviews of ActBlue pages for Iowa Democratic candidates did not turn up examples of any campaign defaulting donors into recurring gifts.

UPDATE: Republican Representative Mariannette Miller-Meeks (IA-02) also began pre-selecting recurring donation options on some pages on May 19. Previously her fundraising pages had provided that option without check marks. The next two images show a new page: 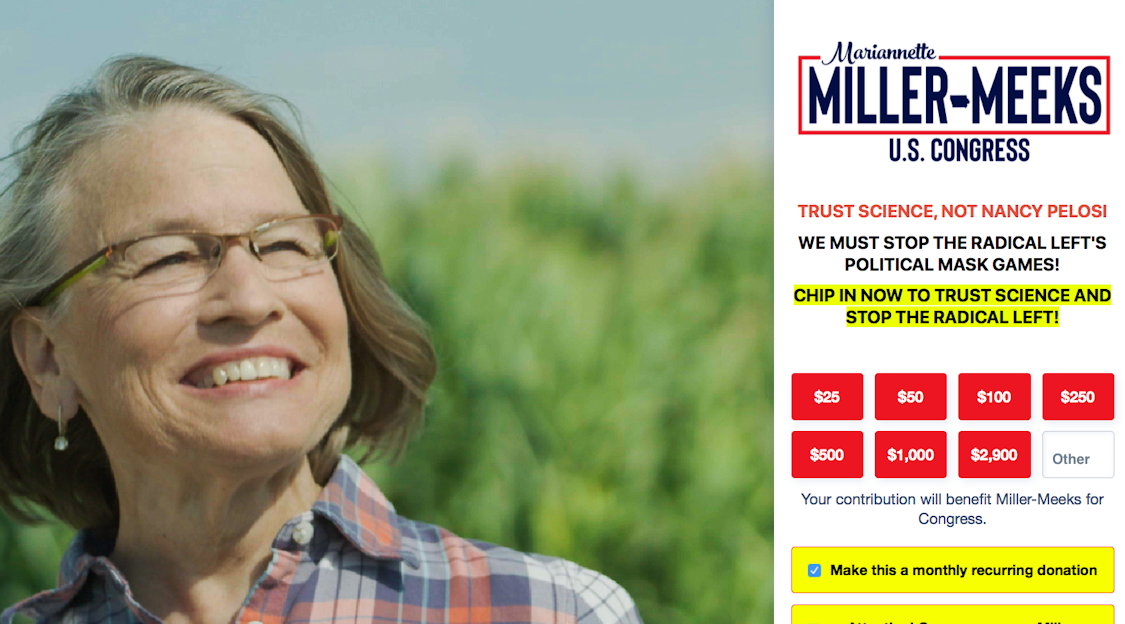 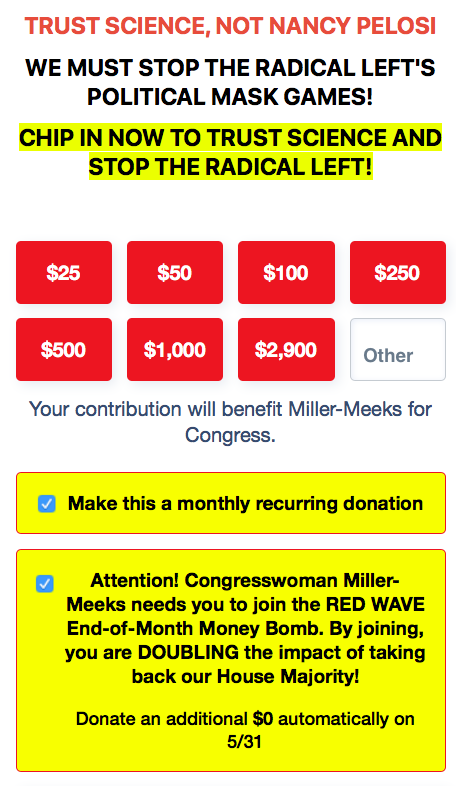 This screenshot was taken from an earlier fundraising page for Miller-Meeks. 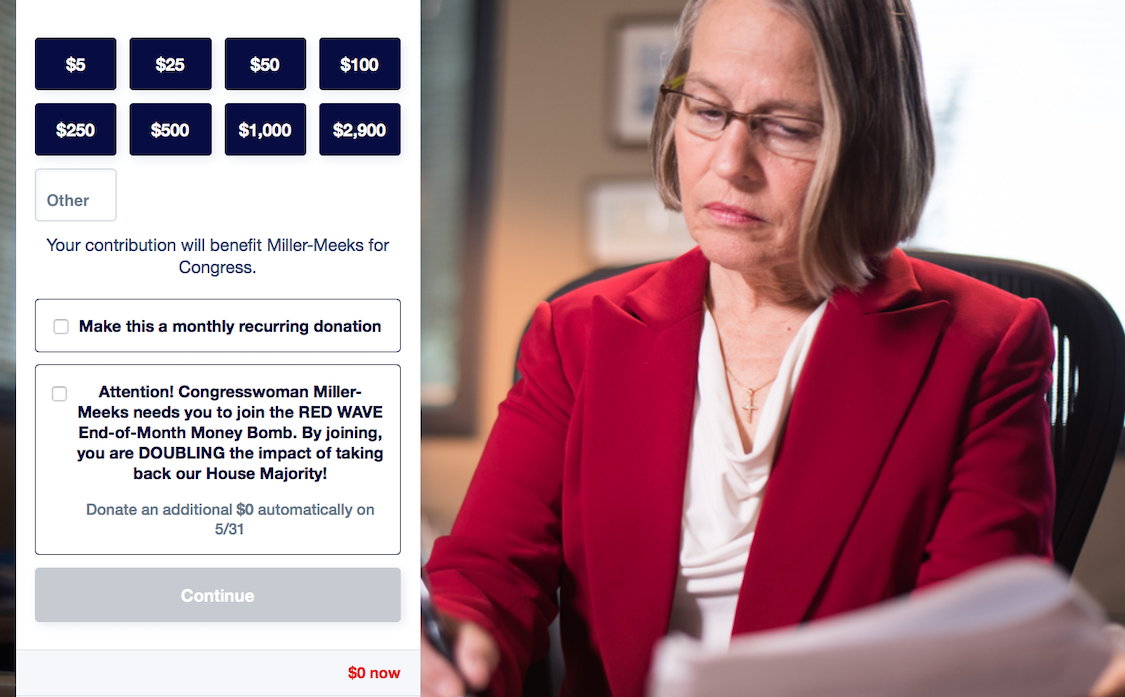