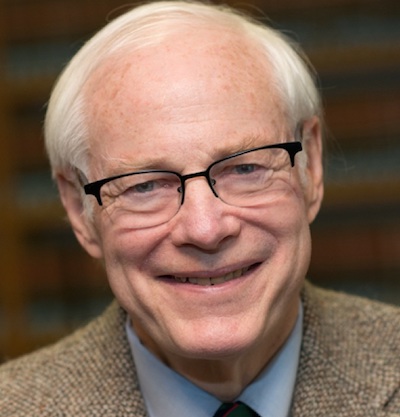 Jim Leach is among 27 former Republican members of the U.S. House who spoke out this week for changing the GOP in the face of "rising political extremism." Four former governors, along with several former ambassadors, cabinet secretaries, or Republican Party leaders are also among the 152 people who signed the "Call for American Renewal" published on May 13.

The document cites "the patriotic duty of citizens to act collectively in defense of liberty and justice" when "forces of conspiracy, division, and despotism arise." The signers "declare our intent to catalyze an American renewal, and to either reimagine a party dedicated to our founding ideals or else hasten the creation of such an alternative."

How they would restore a “common-sense coalition” to counter the current climate of "division and political extremism" is not clear. The Call for American Renewal's website refers to an "upcoming nationwide town hall on renewing America." But opinion polls suggest the vast majority of Republicans support Donald Trump and what he stands for. Current members of the House GOP caucus just ousted Liz Cheney from a leadership position because she continued to tell the truth about the 2020 presidential election and the January 6 coup attempt at the U.S. Capitol.

As for creating a new party, such efforts have rarely been successful in American history, since our electoral system is based on plurality winners rather than proportional representation.

Leach represented much of southeast Iowa in the U.S. House from 1977 through 2006. Many Republicans may not consider him part of the party anymore, since he has moderate views on social issues, endorsed Barack Obama for president in 2008, and signed a statement denouncing Donald Trump in 2016.

I didn't spot any other Iowa names on the Call for American Renewal's website, but would welcome tips on anyone I may have missed. For the most part, the state's Republican politicians and activists have been steadfastly loyal to Trump since he became the 2016 presidential nominee.

Former U.S. Representative Jim Nussle did not sign the new declaration, which was surprising, in light of his statements denouncing the Republican Party following the events of January 6. Nussle represented parts of northeast Iowa for sixteen years and was the GOP nominee for governor in 2006. But in recent years, he has rarely made political pronouncements. Nussle has been president & CEO at the Credit Union National Association since 2014. He did not respond to Bleeding Heartland's inquiry regarding the Call for American Renewal.

UPDATE: According to a CBS News/YouGov national poll released on May 16, some 67 percent of Republicans think Joe Biden is not the legitimate winner of the 2020 election, 66 percent say being loyal to Trump is important, and 80 percent of respondents aware of Liz Cheney's removal agree with the action by House Republicans.