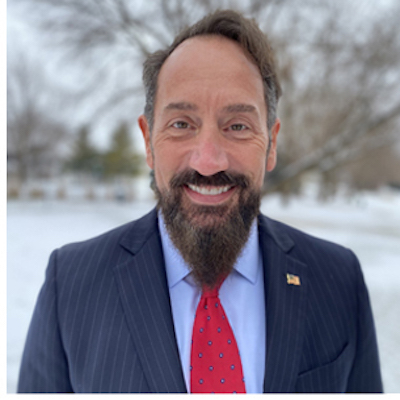 One day before Iowa lawmakers adjourned for the year, the Iowa Senate amended a spending bill to allocate $4.5 million over two years to the Iowa Department of Homeland Security and Emergency Management for a sole source contract.

The funding to install a mobile panic button system in Iowa’s K-12 schools could only have been used by Rave Mobile Safety, which recently signed a contract with the Homeland Security department to replace Iowa’s emergency mass notification system.

The Iowa House altered the bill to leave the funding in place without an earmark for a specific product. But the last-minute effort raises questions about whether outgoing Homeland Security Director Paul Trombino III sought the funding to benefit a company represented by one of Iowa’s most influential lobbyists.

$4.5 MILLION FOR ONE COMPANY’S PRODUCT

The Rebuild Iowa Infrastructure Fund budget allocates gambling tax revenues to a wide range of projects across state government. This year, House File 862 provided for about $108.6 million in spending during fiscal year 2022, which begins on July 1. Republicans in charge of the Transportation and Infrastructure Capitals Appropriations subcommittee agreed to most of the provisions weeks ago, and House members approved the bill along party lines on May 6.

Shortly before the Iowa Senate took up this bill on May 18, State Senator Zach Whiting offered a strike-after amendment that included a new appropriation for Homeland Security. The agency would receive $2.5 million in fiscal year 2022 and $2 million in the following year for costs associated with a new mobile panic button system for use in emergencies.

The bill said that system “may be purchased through an existing statewide contract” and listed other conditions that could only apply to Rave Mobile Safety. For instance, the panic button system must have been deployed in other states’ schools and must be integrated into the Homeland Security Department’s statewide emergency notification system.

Rave Mobile Safety has sold its panic button system to schools statewide [Ed’s note: link removed] in four other states and Washington, DC. In February, the Massachusetts-based company won a competitive bidding process to replace Iowa’s emergency mass notification system. A May 19 news release from the company quoted Trombino as saying the statewide deployment of the Rave Alert system would provide a “streamlined and customizable way to share updates with residents” related to extreme weather, the COVID-19 pandemic, or local events.

Introducing his amendment on the Iowa Senate floor, Whiting explained that the Homeland Security department would receive these funds “for a program called Rave, which is a mobile application that will improve school safety and communications, as well as response times for first responders to K-12 schools in the event of an emergency.” Senators approved the amendment by voice vote and passed the bill a short while later.

Whiting and State Senator Craig Johnson, who chairs the relevant appropriations subcommittee in the upper chamber, did not respond to phone or email messages on May 21 seeking to clarify who asked for this language to be added to the spending bill. Asked during Senate debate where the idea came from, Whiting said he couldn’t say “exactly where it came from” or whether “some particular individual asked for it to be in there.” He described the concept as “a remarkable piece of technology” and implied that not many companies could provide this service.

State records indicate that Jeff Boeyink, a partner in the LS2 lobbying group, has represented the company since the 2020 legislative session. Boeyink, who also did not respond to phone or email messages, managed Terry Branstad’s 2010 campaign for governor and served as his chief of staff until 2013.

While serving as chief operating officer for Governor Kim Reynolds, Trombino helped secure other no-bid state contracts, such as the Test Iowa program for COVID-19 testing, a later contract with a Test Iowa vendor for contact tracing software, and two contracts with Workday to overhaul the state’s accounting and human resources systems. Reynolds named him to lead the Homeland Security agency in January.

Bleeding Heartland asked Homeland Security staff on May 21 whether Trombino had worked with Boeyink on securing the panic button appropriation or had spoken with any legislators about putting the line item in the infrastructure budget. A communications staffer replied that they were working on the request. At this writing, the agency has not answered any of the questions. UPDATE: I’ve added below responses received on May 22.

The governor’s office announced on May 20 that Trombino would soon resign “to pursue other opportunities.” I sought to clarify whether Reynolds was aware of the effort to obtain funding for the panic button system, and whether Trombino was fired or allowed to resign in lieu of termination in connection with trying to secure an earmark for Rave Mobile Safety. The governor’s spokesperson Pat Garrett did not respond.

House File 862 came back to the lower chamber on May 18, because it had been amended. State Representative Jacob Bossman, who chairs the infrastructure appropriations subcommittee in the lower chamber, offered an amendment that kept the $4.5 million appropriation over two years but revised the accompanying language. He told House members,

What was in the bill, we found out, was not the intent in regards to the funding going to the Department of Homeland Security. We want to provide Homeland Security with more discretion over those funds, and this amendment does that. It specifies that the funds can be used for school safety, which we discussed, also flood mitigation or other emergency services programs.

House members approved Bossman’s amendment by voice vote and then the revised bill, mostly along party lines. Later on May 18, Whiting encouraged senators to concur in the House amendment, which they did before a vote on final passage that sent the bill to the governor.

In a May 21 telephone interview, Bossman told Bleeding Heartland that since there are different options for apps, House members wanted to make sure money for a school-based emergency system didn’t have to be used in such a “narrowly-defined” way.

Could Homeland Security use the appropriated funds for a panic button system, if they want to? “Yes, I believe so,” Bossman said. “But it would have to go through the process of finding the vendor that is most appropriate and fits their needs in the best possible way.” He said legislators’ intent was for the department to be able “to pursue multiple companies and find the one that was best suited and not be narrowly tailored, that it had to be spent for this purpose.”

Was the Transportation and Infrastructure Capitals Appropriations subcommittee planning all along to spend $4.5 million for this kind of project? Bossman said that over the past couple of years, there had been some discussions over panic buttons or apps for school safety. In part, those conversations related to mass shootings. More recently, the topic came up in the context of pandemic notices or medical emergencies. “So it’s something that we had been aware of, but it came up at the last minute as far as something that was viewed as a need that maybe we could address this year.” The infrastructure bill House members approved on May 6 had no Homeland Security appropriation.

I wondered whether Bossman had talked about this idea with the state’s previous Homeland Security Director Joyce Flinn, who retired in January. He said legislators had discussed it with the Iowa Department of Public Safety, or with vendors, but not with the Homeland Security department.

Bossman said he didn’t talk with Trombino about the panic button system. He’s talked to Rave’s lobbyist Boeyink in the past, but “not recently.” Did Boeyink have any role in adding this language to House File 862? “Not that I’m aware of,” Bossman told me. “Like I said, that was added in by the Senate.”

I’ll update this post as needed with further information or comments from the officials involved.

UPDATE: Communications staff for the Homeland Security department answered all of the questions via email on May 22. They said the agency “was not aware of this until the amendment to HF862 was introduced” on May 18. The agency has no reports or recommendations related to panic buttons in schools and is “not aware of any requests” from Iowa school districts or the state Department of Education on this front.

Staff also said Trombino didn’t speak with any members of the Iowa House or Senate to advocate for that appropriation within the infrastructure budget and was not working with Boeyink on securing the line item.

At a linked website’s request, a link was removed.