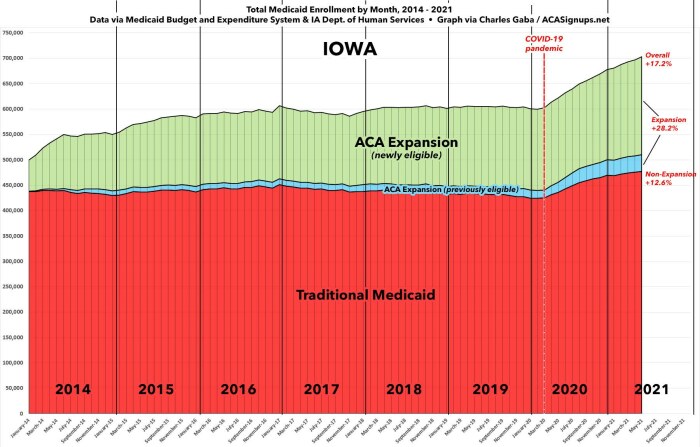 Approximately 702,800 Iowans were enrolled in some version of the Medicaid program last month, up by roughly 100,000 since the COVID-19 pandemic began in March 2020, according to analysis by Charles Gaba at the ACA Signups website.

The biggest increase was in the Iowa Health and Wellness Plan, the state’s version of Medicaid expansion under the Affordable Care Act. Gaba’s analysis indicates that some 225,300 Iowans were participating in that plan as of May 2021, up from about 177,200 people fourteen months earlier.

Enrollment in traditional Medicaid increased by a smaller rate from about 425,000 in March 2020 to some 477,500 last month. The federal government recently released statistics on state level Medicaid enrollments from July 2019 through December 2020. Gaba’s estimates for 2021 are based on monthly reports published by the Iowa Department of Human Services, adjusted to compensate for how closely the state’s numbers tracked with the federal figures for 2020.

After ACA expansion ramped up starting in early 2014, Iowa’s overall enrollment in both traditional and ACA-expansion Medicaid has been remarkably steady, hovering around the 600,000 mark for more than 4 years straight…until COVID hit last spring. Since then, traditional Medicaid enrollment has increased by 12.6% and ACA expansion has gone up by 28.2%, for an overall climb of 17.2% as of May 2021.

Gaba noted that in addition to those now enrolled in the Health and Wellness Plan, approximately 53,000 Iowans receive federal subsidies to help them purchase health insurance through the ACA exchange. Consequently, some 279,000 people (roughly 9 percent of Iowa residents) could lose their health insurance coverage if the U.S. Supreme Court strikes down the Affordable Care Act. The court heard oral arguments in California v Texas last November and is expected to hand down a decision sometime this month.

Iowa’s approach to Medicaid expansion was part of a grand bargain struck near the end of the state legislature’s 2013 session. Governor Terry Branstad and the Republican-controlled Iowa House agreed to allow qualifying Iowans to purchase private health insurance rather than traditional Medicaid. In exchange, the Democratic-controlled Iowa Senate agreed to pass a large commercial property tax cut and an education bill reducing oversight of homeschooled children.

Top image: Graphic on Iowa Medicaid enrollment from 2014 to the present created by Charles Gaba for ACA Signups, published here with permission.