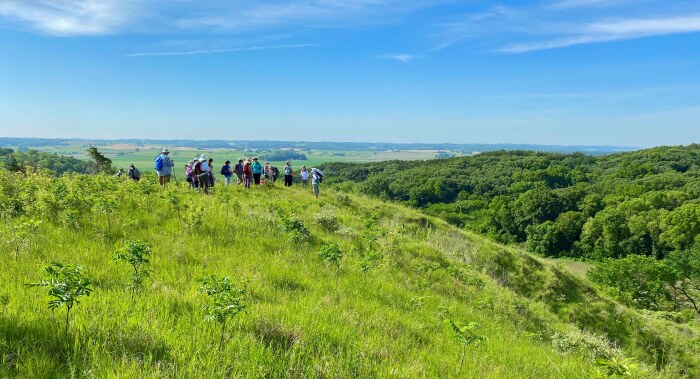 Finding a path for people and wildlife in the Loess Hills

Earlier this month marked the first of what I hope to be a more common event in western Iowa: an organized multi-day hike through the Loess Hills.

Conceived and orchestrated by Golden Hills Resource Conservation and Development (RC&D) and other partners, the Lo(ess) Hi(lls) Trek, as it was called, gave about 30 folks the opportunity to walk a route through and between conservation lands in Monona County. Golden Hills RC&D recently posted an excellent day-by-day synopsis of the LoHi Trek, so I won’t recap the details here.

As a participant, I would like to offer some of my reflections on this journey.

To me, the LoHi Trek represented the partial fulfillment of a vision that many have had through the years to develop a route through the Loess Hills akin to the great of trails of America like the Appalachian Trail. Brent Olson, former state forester for the Iowa Department of Natural Resources, was one of those individuals who grasped that possibility. It was in his honor that a potential piece of that trail was dedicated two years ago in the Loess Hills State Forest Little Sioux Unit, which I wrote about here.

Kelly Madigan, who lives in Monona County, also shares that dream. Beyond dreaming about it, though, Kelly was the first to actually hike the entire length of the Loess Hills. Kelly was both a co-organizer of the LoHi Trek and a host of the Trekkers for two nights. Her journey through the Loess Hills is documented here.

The LoHi Trek gave proof-to-principle that western Iowa can be a destination for outdoor recreation, as well as a contributor to local economic development. Registration for the Trek was restricted and filled quickly. A lengthy waiting list of would-be Trekkers was held in case of cancellations. Many participants were from the Omaha and Des Moines areas, but folks from other areas of Nebraska and Iowa, and even further afield (New York!), were represented in the group.

The Trek was thoughtfully organized to include not just hikes to scenic vistas in natural areas, but also visits with local people and attractions to share stories and conversation. Several stops supported local businesses as well. We dropped by the Pit Shop at Rodney Pits/Peters Park to chat with the owners and have a cold treat, we visited with Kelly’s neighbors, and we learned about an historic schoolhouse near Moorhead, Iowa.

These and other social interactions enriched the experience greatly. A full listing of the businesses and organizations supporting the LoHi Trek can be found at the end of the Golden Hills RC&D summary.

My motivation for joining the Trek was primarily to see parts of the Loess Hills I don’t visit very often and meet like-minded trail enthusiasts. I also thought I could serve as a resource for participants to learn about Loess Hills ecology and management concerns, since I have been working to restore a degraded prairie remnant in the Loess Hills for many years and am familiar with the ecosystem and the challenges it faces.

During our hikes, we traversed some excellent native Loess Hills prairies. Yucca, green milkweed, and prairie larkspur were just some of the many blooming wildflowers that were on display. 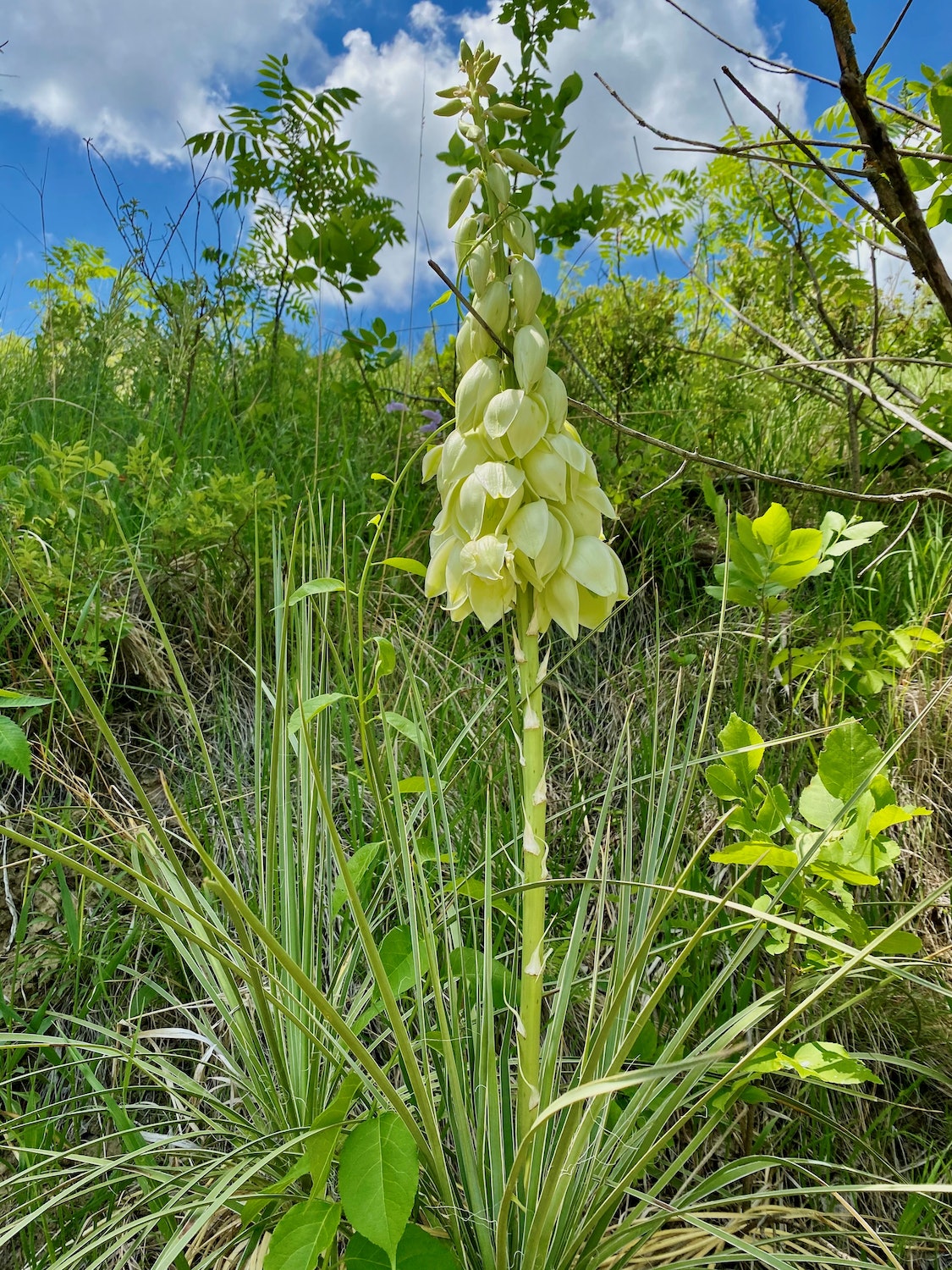 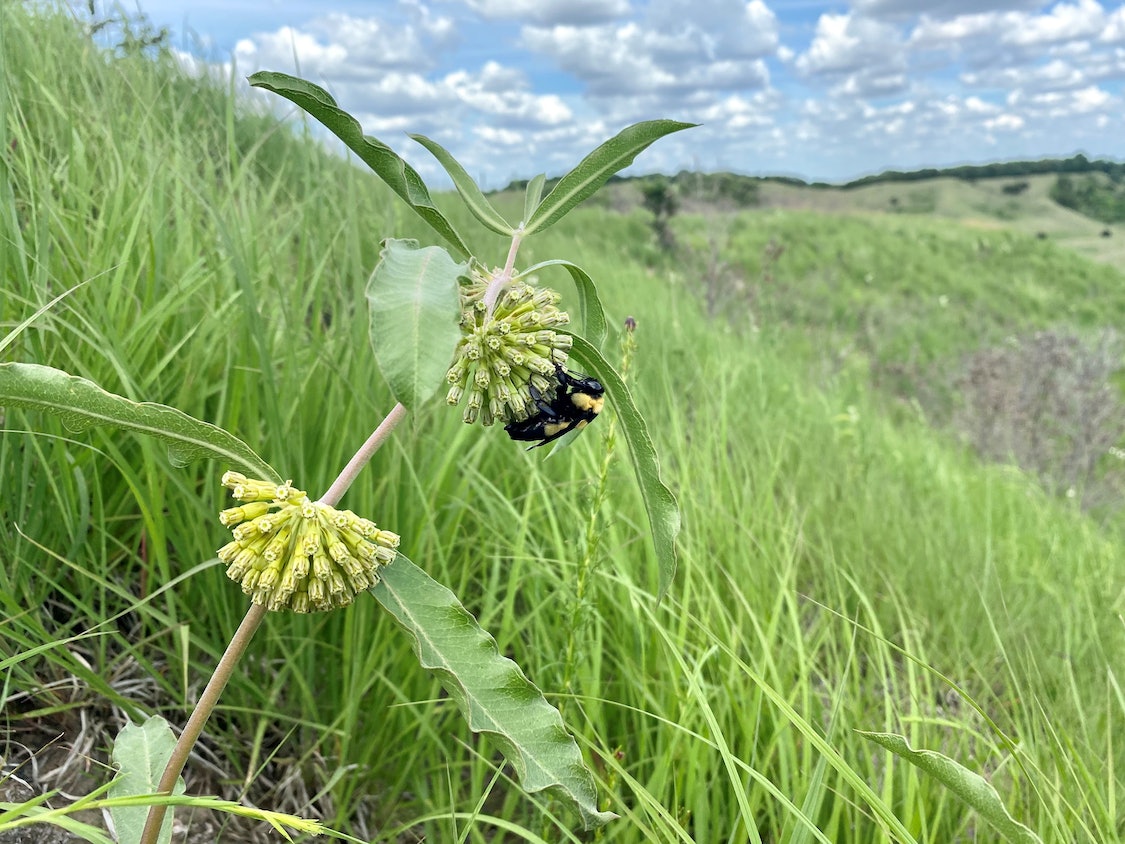 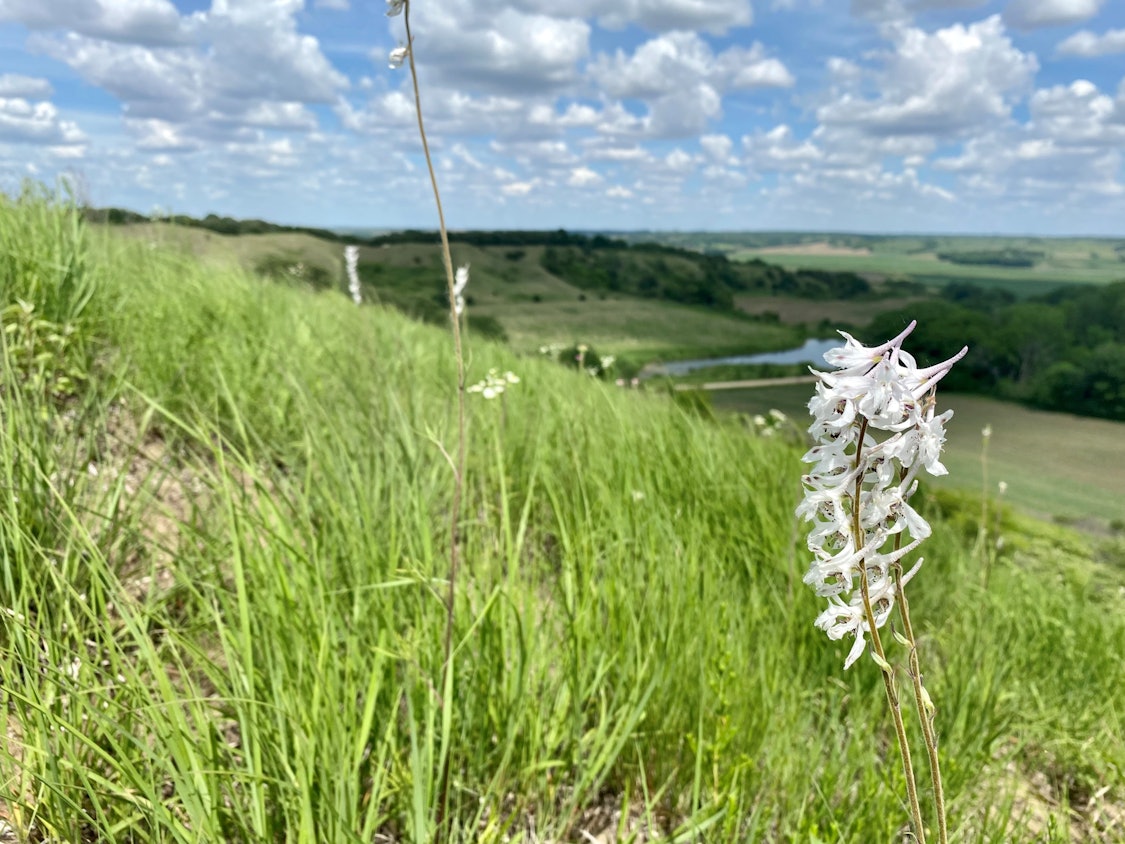 We also passed through parcels that were more degraded – areas infested with smooth brome, crown vetch, leafy spurge, and eastern redcedar. We wandered through former crop fields where prairie has been reconstructed.  We talked about the process of converting brome fields back to prairie though row cropping with corn to remove excess nitrogen before seeding back native species. 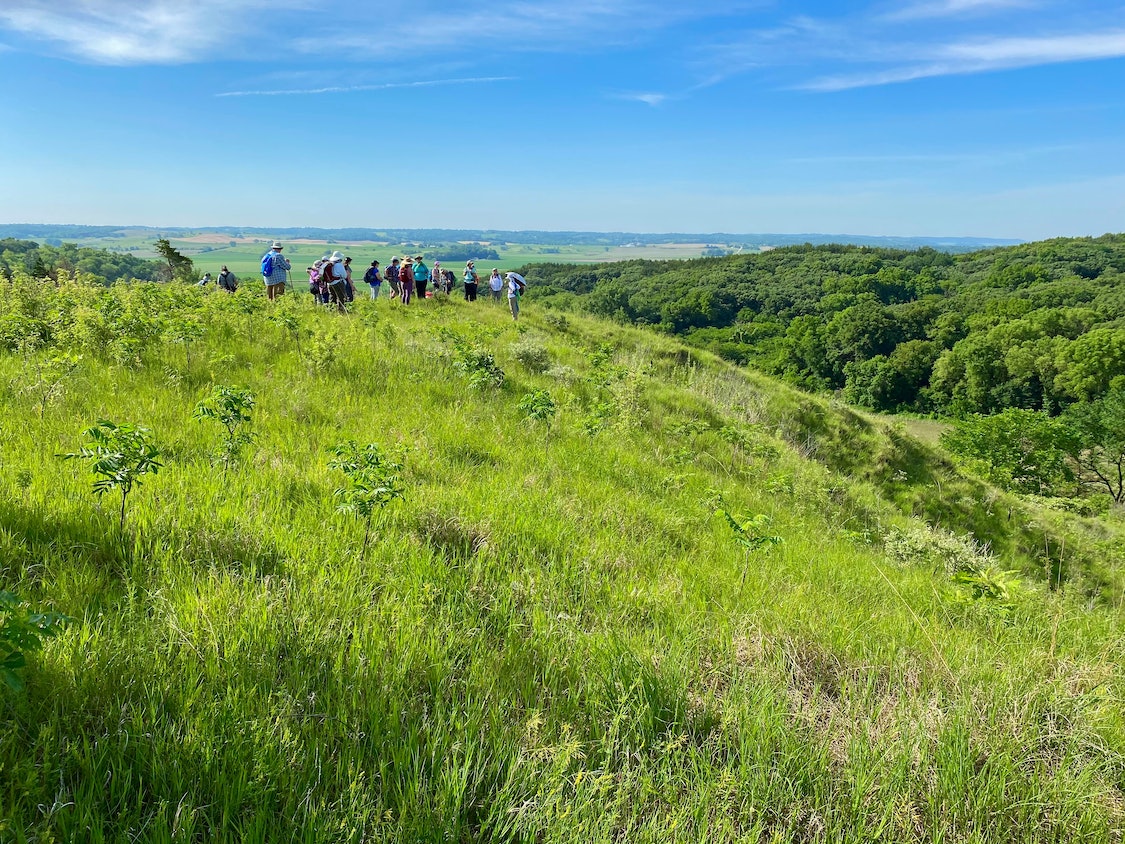 We saw hillsides with prairie openings shrinking from the unrelenting shade of encroaching trees, but we also saw recovery of the prairie in places where they have been removed and a regimen of prescribed burning implemented. We discussed biological and chemical controls for invasive species, and witnessed first-hand one of these agents, the caterpillar of the Spurge Hawk Moth, feasting on leafy spurge. 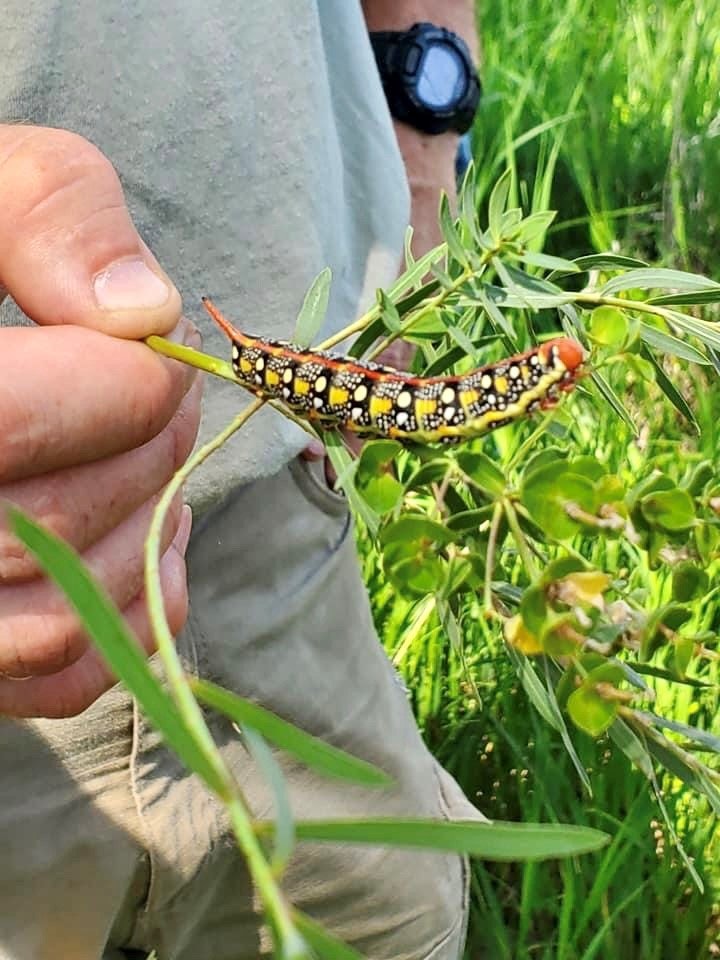 In short, we saw the ecological challenges facing our native Loess Hills prairies, but we also saw hope in action to recover what has been diminished or lost. 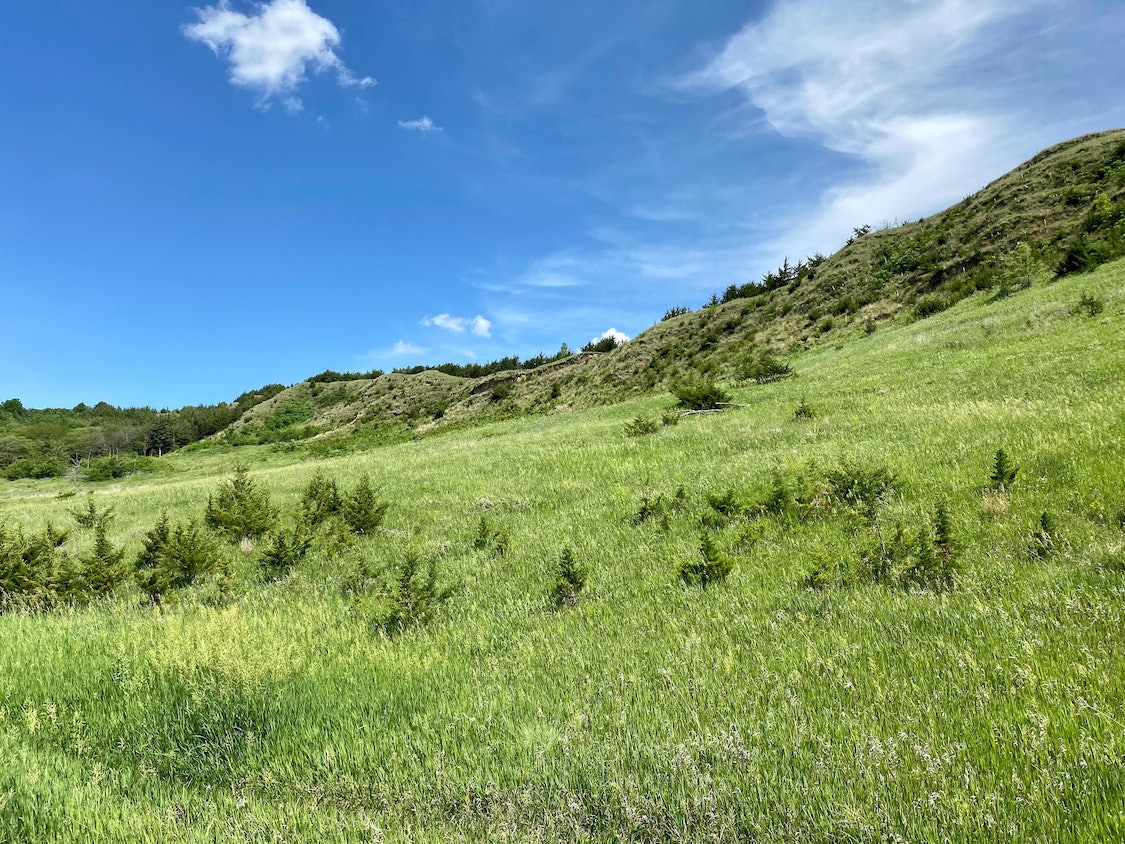 While our hikes offered many stunning views, the most profound nature moments for me occurred during the morning and evening hours listening to sounds of life around our campsites. I don’t recall ever hearing Whip-poor-wills in the wild before, but was informed that they were present in the area and we might hear them. At our first campsite, I was awakened at 5 am by their singing. One even landed on my tent to serenade me for about a minute or so. I feel this moment bore a special significance for me that I am still processing.

At our second campsite, I chose to pitch my tent next to a pond. 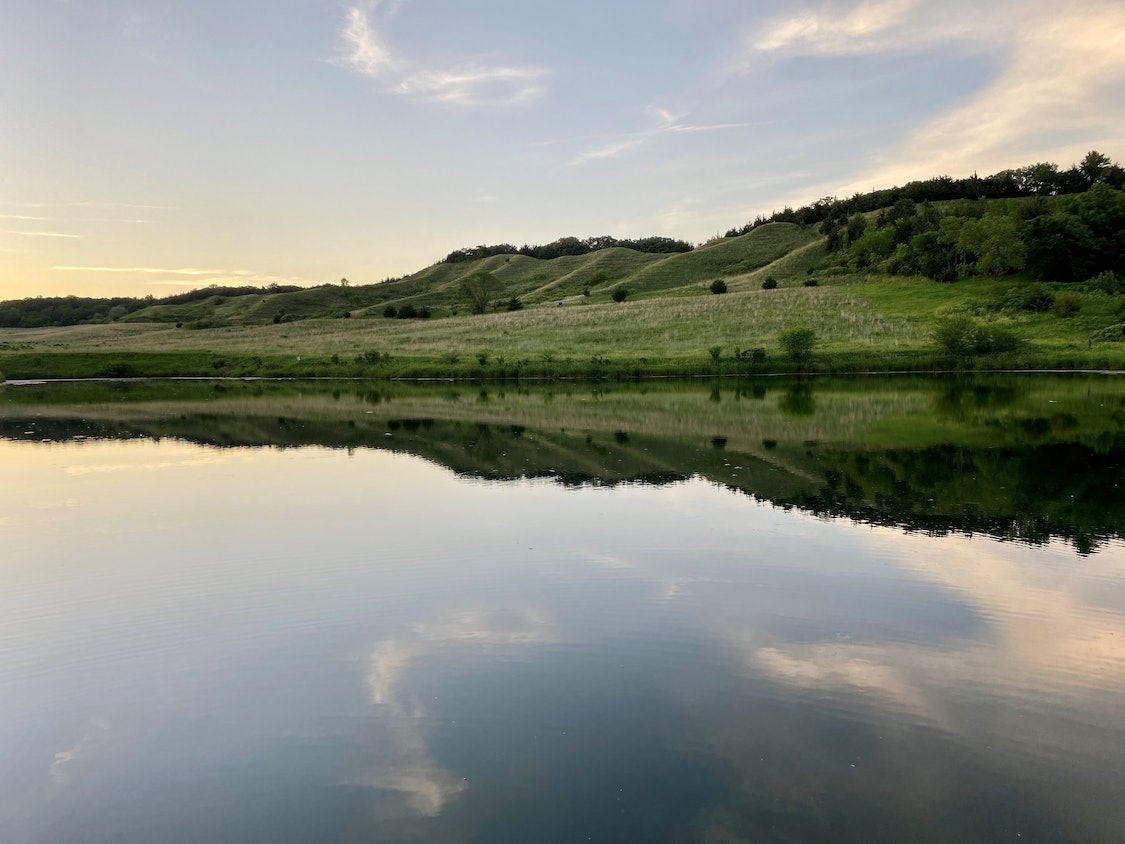 The Whip-poor-will wake-up calls of the previous morning were only a prelude to the morning chorus I heard at this site.  It was unforgettable, so I decided to record a snippet on my iPhone for posterity. Turn it up. And just listen (you can hear Whip-poor-wills singing at the beginning and end of the recording).

What struck me was the abundance and diversity of life that I could hear, and the absence of human noise. It is hard not to be moved by that.

My question for readers is this: are you able to hear something like this where you live? The truth is, for most of us, the answer is no. The reason why you can hear life in abundance in this location is because the landscape supports it. Almost the entirety of this little valley is in natural cover (including both remnant and reconstructed prairie and woodlands). That land is amazingly productive biologically.

By returning some of the acres currently in cultivation to permanent, mostly native cover, particularly in areas with steep grades that are prone to erosion and runoff, and connecting them with existing natural lands that can be managed en bloc, we have an opportunity to recover some of the abundance and diversity of life that exists in Iowa. Life is resilient if given a chance.

As I’ve discussed previously, agriculture is quite compatible with the idea of a Loess Hills corridor that supports safe passage of humans and wildlife on their journeys, so I will not revisit that topic here. Rather, I will return to idea that this type of corridor can improve human connection to the special ecology of the Loess Hills and the heritage of the communities there, and, ultimately, to one another.

An organized group excursion like this has some advantages over trying to go it alone. First, a multi-day hike poses many logistical challenges to obtaining food, water, shelter, and transportation, as well as for planning the route and managing sanitation and contingencies. Organizers who can address these issues can make the trip safer and more accessible for people, particularly if one is not familiar with the area.

Second, greater attention can be given to local expertise and cultural attractions and stories, which may not be recognized or prioritized by the individual. Organizers can help build context for and connection to the landscape and its people.

Third, and perhaps most important, is the camaraderie, stories, and talents shared by the participants themselves. If one plans a trip like this as an individual, strangers are not typically included. But the interactions with the other members of the group, almost all of whom I did not know beforehand, provided some of the most meaningful memories of the trip.

Getting to know new people during an event that can (and did) pose physical challenges right from the start (especially the above-normal heat) is socially a bit awkward. Perhaps coming out of our social bubbles created by the COVID-19 pandemic further amplified these feelings. But as we trekked, ate, camped, and socialized together, we began to learn more about each other.

We heard stories of struggle and healing, and surprising things that folks would not likely guess about us, we sung by a campfire, swam in a pond, took lessons in watercolor painting and hula hooping, and enjoyed wonderful homemade quiches and pies together. These and other shared experiences turned a collection of participants into a community of people, connecting them to a place, its inhabitants, and to each other in a way that I have seldom experienced. Perhaps that was the greatest achievement of the LoHi Trek.