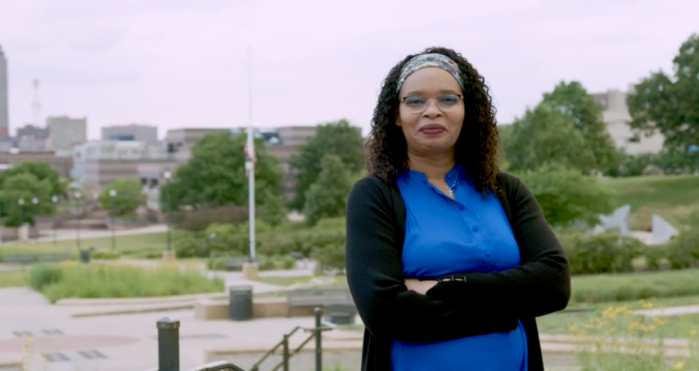 A second Republican has entered the primary race in Iowa’s third Congressional district. Nicole Hasso, who lives in the Des Moines suburb of Johnston and works for the Principal Financial Group, launched her campaign on July 7.

I’m having trouble embedding Hasso’s introductory video, which was posted on YouTube and her campaign’s Facebook page. UPDATE: Here it is.

Here’s my transcript of the video, in which the candidate speaks throughout.

I was never supposed to end up here. Well, not according to the Democratic Party, anyway.

I am Nicole Hasso. I am a conservative Republican, and if you hadn’t noticed, I am a Black woman.

I grew up on the south side of Chicago. My family didn’t have a lot. My mom fought drug addiction, and my dad wasn’t around much. The community that I grew up in was rotted by decades of neglect, violence, and dependency on government.

Critical Race Theory says the American Dream isn’t for people who look like me, who come from where I came from. Too many people think that without special treatment and big government, your skin color, your gender, and your ZIP code — not your choices — decide your destiny.

But I choose differently. I was the author of my own story, and I thank God every day that that story brought me here to Iowa.

I became the first person in my family to graduate high school. I even earned an academic scholarship to Drake University in Des Moines. I met my husband Mitch, had two kids, and built a great career in financial services.

My story is only possible in America. Because here, where you start does not have to be where you finish.

But all of that is under attack today. Schools are labeling our children oppressors and victims, based on their skin color! The radical left is attacking law enforcement and promoting lawlessness, in our community and on the southern border.

To them, I was never supposed to be a successful professional, much less a Republican running for Congress.

But here I am. Here we all are. And it’s time for Iowa to choose differently. To make our last stand. To defend our freedoms and this great land we love. To support our police, to protect innocent life, to defend our right to keep and bear arms, to fight for lower taxes, smaller government, and better opportunities for all Americans.

I am Nicole Hasso, Republican candidate for Congress. And I am asking you to choose differently too.

Choosing “differently” alludes to the fact that Iowans have never elected a person of color to Congress. To my knowledge, no Black candidate has ever become a major party nominee for any federal office in Iowa.

Hasso’s campaign is on Facebook and Twitter (though she hasn’t tweeted yet). I couldn’t find any committee registered on the Federal Elections Commission’s website, so she probably has not raised or spent more than $5,000 on her campaign yet.

Despite finding a way to cram just about every conservative catch phrase into two minutes and 40 seconds, Hasso will likely struggle to compete with GOP rivals who have won elected offices before. Although she is active locally–recently speaking at a Johnston school board meeting against hiring a new district diversity director–she doesn’t seem to have laid the groundwork for a Congressional campaign.

Databases maintained by the Iowa Ethics and Campaign Disclosure Board and the Center for Responsive Politics’ OpenSecrets.org indicate that neither Hasso nor her husband has contributed to any Iowa candidate for a federal office. Records show Nicole Hasso has made just one contribution to an Iowan running for a state office: $40 to State Senator Brad Zaun’s campaign in 2020. Mitch Hasso has also donated only once to an state candidate: $95.90 to Eddie Andrews, who ran successfully for the Iowa House district covering Johnston in 2020.

Hasso has one thing going for her campaign: her Polk County residence will certainly be located in the third Congressional district, regardless of how Iowa’s next map is drawn. The same can’t be said for former State Representative Mary Ann Hanusa of Council Bluffs, who has been campaigning for the GOP nomination since April. Hanusa walked in some Polk County parades over the July 4 holiday weekend.

More experienced potential challengers to U.S. Representative Cindy Axne include State Senator Zach Nunn and Iowa Senate President Jake Chapman. Nunn lives in Polk County, so is guaranteed to be in a position to run for Congress in the third district. Chapman’s Dallas County home could end up in IA-04, but I expect the next map to keep Polk and Dallas counties together. Since Nunn is up for re-election in 2022, he would have to give up his legislative seat in order to seek higher office. Having just been re-elected to a four-year term, Chapman could run for Congress without risking his position as the second-ranking Iowa Senate Republican.

UPDATE/CORRECTION: Chapman posted on Facebook in June that he won’t run for Congress next year, saying, “I believe I can best serve in my current role and build upon our success here at home.”

Axne has not confirmed whether she will seek a third term in the U.S. House next year or run for another office. If she doesn’t seek re-election, she is more likely to run for governor than for U.S. Senate, since former U.S. Representative Abby Finkenauer is reportedly assembling a Senate campaign team.