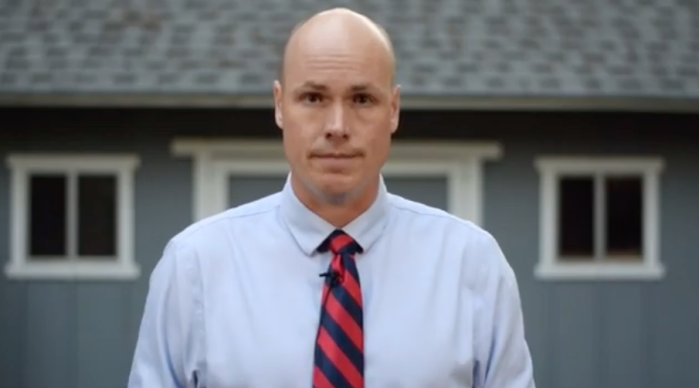 J.D. Scholten to help Democrats "up our game in rural America"

"Right now, Democratic policies are very popular," said J.D. Scholten in a video revealing his future plans. "However, they're being drowned [out] by mis- and disinformation. We have to remember that we're just a handful of states and under 100,000 votes from a Donald Trump second term and a Republican-controlled House and Senate."

Many Iowa Democrats--including Scholten's own parents--saw the two-time Congressional candidate as a possible 2022 contender for U.S. Senate. Others encouraged him to run for governor. But Scholten announced on July 13 that he won't run for any elected office next year. Instead, he will serve as the executive director of RuralVote.org, a super-PAC with a mission "to improve the Democratic brand in rural communities and empower local advocates to battle misinformation in their communities."

In video released on July 13, Scholten laid out the RuralVote strategy.

The super-PAC is looking to target 39 counties across the country and hopes to improve Democratic performance by 5 percent. That's a realistic goal, which recognizes that Democrats don't have to win rural a lot of rural counties to swing statewide elections. They just need to keep Republican margins down outside large metro areas.

In a statement enclosed in full below, Scholten said, "One of the reasons why we continue to lose state houses across the country is because we’re ceding rural America to Republicans. If we want to win over hearts and minds for progressive policies everywhere, we need to up our game in rural America big time.”

RuralVote is "crunching the numbers" to determine where to focus their efforts. A fundraising email from Scholten on July 14 named "Georgia, Kansas, North Carolina, Ohio, Pennsylvania, Wisconsin, South Carolina, Arizona and my home state of Iowa" as battleground states "where rural areas will decide control of the U.S. Senate in 2022."

Rural issues including corporate concentration were major themes of Scholten's two Congressional campaigns. He vastly outperformed the top of the Democratic ticket in his 3.3-point loss to U.S. Representative Steve King in 2018. During that race, he held at least three events in each of the 39 counties in Iowa's fourth district.

Scholten campaigned in all of the district's 374 towns during his second U.S. House bid. But facing a more generic Republican in Randy Feenstra, he lost by 62.0 percent to 37.8 percent last November. That said, Donald Trump carried the IA-04 counties by an even wider margin: 63.9 percent to 36.1 percent for Joe Biden. Scholten noted this week that he was "one of the few non-incumbent Democratic candidates to outperform the top of the ticket" in 2020, adding in the fundraising email, "I strongly believe it’s because of the hard work getting our message out to rural voters."

RuralVote.org raised $313,433 during the 2020 election cycle and spent $247,440, of which $189,808 went toward independent expenditures supporting Biden and two unsuccessful Democratic candidates for U.S. Senate: Theresa Greenfield in Iowa and Barbara Bollier in Kansas. Among other things, the group placed 42,500 yard signs "in rural battleground communities in Wisconsin, Michigan, and Pennsylvania."

J.D. Scholten is partnering with RuralVote.org, a new superPAC to improve the Democratic brand/infrastructure while battling mis/disinformation in rural America

Former Democratic congressional candidate J.D. Scholten announced today that he will be joining forces with RuralVote.org, on a massive campaign to improve the Democratic brand with rural voters and battle rampant disinformation in those communities.

The grassroots campaign will develop a network of homegrown rural messengers with the ability to combat the Republican disinformation machine and improve the Democratic and progressive brand in small towns and rural communities. RuralVote.org will build “Blue Rural Civic Infrastructure” in the top 39 rural counties that will decide control of the US Senate in 2022. The goal is to increase Democratic margins by 5 percent in those 39 counties, not only to help win the Senate races at the top of the ticket, but to improve Democrats’ chances down ballot too.

“Democrats need to stop ignoring rural voters,” said J.D. Scholten. “One of the reasons why we continue to lose state houses across the country is because we’re ceding rural America to Republicans. If we want to win over hearts and minds for progressive policies everywhere, we need to up our game in rural America big time.”

“Democrats have not yet addressed the underlying issues that led us to the Trump Era,” said Matt Hildreth, Founder of RuralVote.org. “We are still just a handful of states—and less than 100,000 votes—from Trump’s 2nd term and Republican control of both chambers. Democrats cannot afford to cede rural America to the Republicans and allow their massive misinformation campaigns go unanswered.”

J.D. Scholten received national notoriety for his creative, grassroots campaign that came within just 3 percent of defeating controversial Congressman Steve King in 2018 in a Trump +27 rural district. J.D. Scholten was also one of the few Democratic non-incumbents that outperformed the top of the ticket in 2020.

RuralVote.org is a national Super PAC from the creators of RuralOrganizing.org that placed 42,500 rural signs in rural battleground communities in Wisconsin, Michigan, and Pennsylvania in the 2020 Election. RuralVote.org aims to improve the Democratic brand in rural communities and empower local advocates to battle misinformation in their communities.