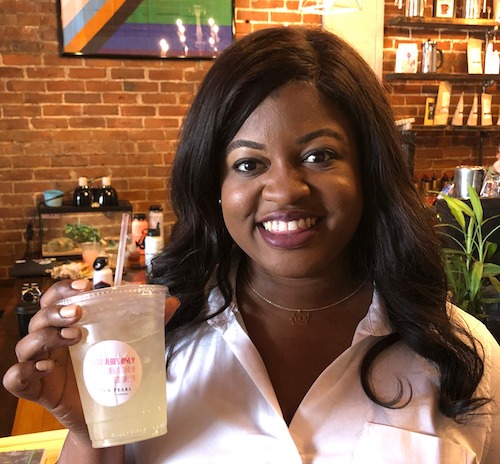 Deidre DeJear: "I'm ready to do the hard work"

Deidre DeJear wants to run for governor if she can see a path to victory and will make up her mind by the end of the summer, she told Bleeding Heartland on July 18.

In a telephone interview, the 2018 Democratic nominee for secretary of state described her first few days on the road as a possible candidate for governor. After announcing on July 12 that she's exploring a bid for the state's top office, DeJear held events in Des Moines, Davenport, Clinton, Muscatine, Ottumwa, Burlington, and Fort Madison over the next three days.

The trip was "an incredible experience," DeJear said. She enjoyed the "opportunity to reconnect" with people she hadn't seen in a long time and visit small businesses in every town. DeJear has worked with small business owners through her own company, Caleo Enterprises, since 2008, and she emphasized small business development during her campaign for secretary of state.

At each stop last week, DeJear asked those present to tell her about some positive aspects of life in their city before they discussed the local problems that need solving.

Although people had good things to say about where they live, "a resounding theme" in each town was that Iowans feel they've been left behind. Jobs are leaving, and infrastructure is deteriorating. "They're watching their communities fall by the wayside," DeJear said. People "see the potential" to turn things around. "They just need some help."

What did she hear last week that surprised her? "People really still do have hope. They just want leadership to help them through these challenging times."

I wondered whether this "exploratory" phase was just a formality, or whether DeJear is genuinely uncertain about running for governor. "I've already decided that this would give me a great pleasure to do. I would be honored to be Iowa's next governor."

What will determine whether she moves forward? "We've got to make sure that our path to victory is ironclad and that we can raise the resources" to win a Democratic primary and the general election.

She expects to decide by the end of the summer. "I've made up my mind that I'm ready for this, I'm ready to do the hard work, and I'm hopeful that my exploratory [committee] is going to stand behind me and push me through it." She didn't specify any benchmarks for fundraising or popular support, but said she needs to see "a strong path."

It's important for me to make up my mind and to know what I'm capable of and to determine how I can add value, but then, you've got to make sure that the numbers align. And I'm hopeful that they will.

DeJear has events planned next week in southern Iowa and eastern Iowa, including the Iowa City/Coralville area. (Strong margins among Democratic voters in large eastern counties carried her to victory in her close 2018 primary against Jim Mowrer.) The week after next, DeJear will visit parts of northeastern Iowa, and she's going to some northwestern counties in early August.

Reporting on DeJear's stop in Fort Madison on July 15, Angie Holland quoted the possible candidate as saying she has talked with State Representative Ras Smith. "'And you know we basically say Godspeed,' she said, but there would be no 'dog fight.'” Smith launched his own campaign for governor in June after laying the groundwork for several months.

Appendix: Video introducing DeJear's exploratory campaign. "If I run for governor, I want it to be a real, people-powered, grassroots campaign."

Des Moines, IA -- Deidre DeJear, a business leader from Des Moines,  announced today that she will be travelling across Iowa for a Conversation Tour, officially launching her exploratory committee for Governor.

“In recent years Iowa has experienced unprecedented challenges. We have been through a pandemic, a derecho, and many of our underlying economic struggles remain. As Iowans, I know that we can face -- and overcome -- these challenges together. It doesn’t matter if you are a Democrat, Republican, Independent, or someone who has given up on politics. Everyone deserves a listening ear and a seat at the table. In these divided times, it’s more important than ever to unite as Iowans. That’s why I’m starting a Conversation Tour where I hope to talk with as many Iowans as possible. I want to hear about their concerns and their successes. I want to hear about their hopes and dreams for their communities. In order to resolve Iowa’s challenges, we must begin with Iowa’s people. That responsibility rests in the hands of one of the most influential leadership positions in our state -- Iowa’ s governor. So if I run for governor, I want it to be a real people-powered grassroots campaign, where you hear directly from me and I get to hear from all of you about how we heal our communities, invest in our public schools, strengthen our businesses and make sure every family has affordable health care.”

Dejear will launch her exploratory committee with a “Conversation Tour”.  Starting with a small business conversation in Des Moines at Paparazzi Hair Studio and Spa, Deidre will travel to Eastern and Southeast Iowa on Tuesday. Stops on the tour this week will include Clinton, Davenport, Muscatine, Burlington, Fort Madison, and Ottumwa.

DeJear founded her own firm 15 years ago to directly work with small businesses. Over the course of her career, Deidre has worked with over 600 businesses on developing growth strategy, marketing plans, and business planning . Dejear’s career began with helping companies after the Great Recession and has continued through the current pandemic when Deidre assisted over 120 companies in navigating what resources were available to help small business owners.

As a voting rights champion and community leader Deidre previously ran for Secretary of State of Iowa in 2018. Deidre is the Vice President of the League of Women Voters in Des Moines, is a member of Links, Inc. and currently serves on the boards of Count the Kicks, Des Moines Housing Services Board and the Iowa Interfaith Alliance.

Deidre was born in Jackson, Mississippi. Deidre was eight years old when her mother passed away shortly after giving birth to her younger sister. Deidre, her father, and two siblings later relocated to Oklahoma when Deidre’s stepmother and stepsister joined the family. Deidre moved to Iowa to attend Drake University. While still a student, Deidre co-founded the nonprofit Back to School Iowa to support youth to continue in their educational endeavors. DeJear served as a competitive coach for the East High girls basketball team, and was with the team during their 2011 undefeated state championship run. Deidre recently celebrated her 10 year wedding anniversary with her husband Marvin. Deidre and Marvin live in Des Moines with her two dogs, Macy and Maurice, and their bird, Honey.

Top image cropped from a photo of Deidre DeJear at The Black Pearl in Muscatine on July 14.