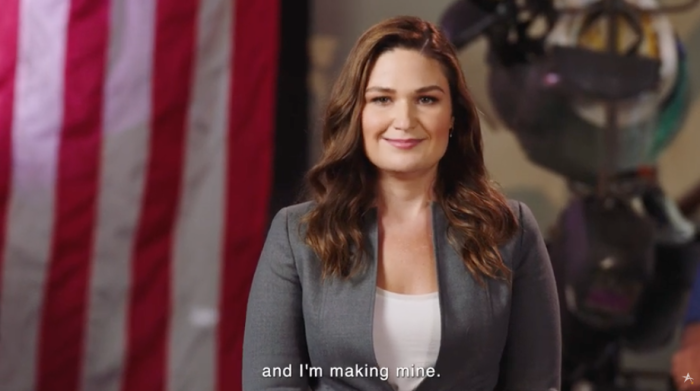 Former U.S. Representative Abby Finkenauer made it official on July 22: she's running for the U.S. Senate. And even though signs point to long-serving Senator Chuck Grassley seeking another term in 2022, at least two other people are poised to compete against Finkenauer and Dave Muhlbauer for the Democratic nomination.

Finkenauer will carry several advantages into the primary campaign. But compared to Iowa's last Democratic race for U.S. Senate, the contenders will be playing on a much more level field.

"THEY'VE TURNED THEIR BACKS ON DEMOCRACY AND ON US"

Finkenauer tweeted that she's running for Senate "because Iowa—and our Democracy—are worth fighting for," and Grassley "has lost touch with both" during his 46 years in Washington. Her introductory video echoed themes from her previous campaigns about the values she learned growing up in a working-class family.

My parents couldn't give me a trust fund or debt-free college, but they taught me about seeing work to be done and doing it. About treating people with respect. And about never thinking you are better than anyone else, no matter what you do or where you go. When I was elected to Congress, I took those values with me.

But the politicians who have been there for decades don't really want people like us there. They think they own democracy. And they were silent when it was attacked. You see, it's politicians like Senator Grassley and Mitch McConnell, who should know better but are so obsessed with power that they oppose anything that moves us forward.

Since the Capitol was attacked, they've turned their backs on democracy and on us. They made their choice. And I'm making mine.

If anything, it's generous to say Grassley was "silent" when democracy was attacked. The senator lent credibility to Donald Trump's lies about the 2020 election by claiming concerns about "irregularities" were valid. He also drew false equivalencies between sustained Republican efforts to subvert the peaceful transfer of power and a handful of Democrats objecting to the electoral college counts in 2001 and 2017.

Speaking to James Lynch of the Cedar Rapids Gazette, Finkenauer said Congress doesn't have enough people “who actually understand working families versus just reading about them.”

Finkenauer served two terms in the Iowa House before running for Congress in 2018. She defeated incumbent Rod Blum in the general election, outperforming the Democratic nominee for governor in the district's 20 counties. But in a surprise to many Iowa politics watchers on both sides of the aisle, she lost to GOP challenger Ashley Hinson last year by a 2.6 percent margin. Though she did slightly better than the top of the Democratic ticket, she couldn't overcome Donald Trump carrying her district by about 3.5 points.

“Hey, 2020 was a really tough year for Iowans. We had the pandemic, we had the derecho,” she said. “I was focused on making sure we did our job and didn't focus on the division that oftentimes we saw pushed by the other side, whether it was conspiracy theories or what have you.” [...]

“I’m going do everything I can to make sure that they know I'm somebody who's going to do the work and not just tweet out whatever seems to be the hot topic of the week.”

Finkenauer's political experience will be an asset in the Senate primary. She has very high name ID in the counties she formerly represented, which include Linn (second largest in Iowa by population), Black Hawk (fifth largest), and Dubuque (seventh). The latest figures from the Iowa Secretary of State's office indicate that of the 612,051 active registered Democratic voters statewide, 161,628 live in counties that are part of the first Congressional district. Having appeared at many other Democratic or progressive events around Iowa over the years, Finkenauer is also well known among activists in counties outside IA-01.

A statewide campaign costs a lot of money. Finkenauer raised nearly $4.6 million for her first Congressional race and about $5.9 million for her re-election bid, so she will certainly be able to finance statewide direct mail and paid advertising before the June 2022 primary.

The only other Democrat who has already announced for Senate, former Crawford County Supervisor Dave Muhlbauer, reported raising about $63,000 during his first five weeks as a federal candidate.

Dr. Glenn Hurst hasn’t made his Senate campaign official but recently filed organizational papers with the Federal Election Commission, so is likely to begin actively campaigning soon. He previously ran for Pottawattamie County supervisor in 2018.

Retired Admiral Mike Franken, who finished second in last year's four-way Democratic primary for Senate, has been considering another campaign. He raised about $959,000 for his 2020 race and received nearly 25 percent of the vote despite having little establishment support, so would have a solid base to build on if he runs again.

Asked about Finkenauer's campaign launch, Franken told Bleeding Heartland via email, "it’s important that an array of candidates vie to represent the Democratic Party in the primary. Ultimately, our party’s success in the general election will hinge on winning a large swath of the Independent vote, and broad party appeal will be the winning formula for the eventual winner. We cannot miss this opportunity."

Finkenauer easily won the four-way Democratic primary in the first district in 2018, thanks in part to early support from the Democratic Congressional Campaign Committee, the political action committee EMILY's List, and many labor organizations. She should receive most of the labor endorsements in the Senate primary, and while unions may not deliver their members as effectively as they used to, they can still be helpful allies in getting out the vote.

EMILY's List, which supports pro-choice Democratic women running for office at all levels, has named Grassley among their 2022 targets. It stands to reason they would back the only woman in the IA-Sen field. The organization did not respond to Bleeding Heartland's request for comment on July 22.

Some prominent Democrats, such as former state party chair Sue Dvorsky, appeared in Finkenauer's launch video, so will likely help line up support for her through their networks.

The biggest difference between the coming race and Iowa's last Senate primary will be the role of the Democratic Senatorial Campaign Committee. The main campaign arm of U.S. Senate Democrats endorsed Theresa Greenfield right out of the gate in 2019 and did the same for several other top recruits.

DSCC press contacts had no comment for the record on Finkenauer's campaign, but Francesca Chambers reported for McClatchy on July 15 that committee officials don't plan on making any early endorsements.

The DSCC, which is chaired by Michigan Sen. Gary Peters, now says it will give voters and grassroots organizations more time to make their own assessment of candidates. But DSCC officials say they still may intervene in primary battles down the road. [...]

As they decide whether to make endorsements in primaries, DSCC officials say their guiding principle will be identifying who is the best candidate to win the general election. Otherwise, they said there is not one single set criteria that candidates will need to meet to receive the committee’s support. [...]

Some Democrats say the committee’s past primary endorsements have had the opposite of their intended effect, sparking divisions within the party rather than focusing on defeating the GOP in the general election. […]

The Senate Majority PAC, a super-PAC aligned with the DSCC, funded a massive paid advertising campaign supporting Greenfield, beginning in early 2020. That group spent $6 million on the front-runner's behalf before Iowa's primary election.

Many Democratic activists didn't appreciate DC groups putting their thumb on the scale for Greenfield. Resentment grew when the Women Vote! super-PAC, which is affiliated with EMILY's List, spent more than $900,000 on negative advertising targeting Franken.

National groups would be wise to be more hands-off during this cycle's Senate primaries. If they feel compelled to weigh in, they should focus on positive messages about their endorsed candidates, rather than tearing down other Democrats.

Current Iowa Democratic Party chair Ross Wilburn will stay neutral in the 2022 primaries, and President Joe Biden (whom Finkenauer endorsed before the 2020 Iowa caucuses) is not expected to get involved in any Democratic primaries next year.

UPDATE: Communications staff for EMILY's List told Bleeding Heartland on July 26, "Senator Grassley is one of EMILY's List's three "On Notice" senators this cycle, making his seat one of our top targets to flip. We've been proud to support Abby Finkenauer in the past, as she's proven to be a champion for women and families, and we are watching closely as the race takes shape."

Cedar Rapids — Today, Abby Finkenauer, the daughter of a union pipefitter-welder and a tireless fighter for Iowa’s families, announced her campaign for the U.S. Senate. 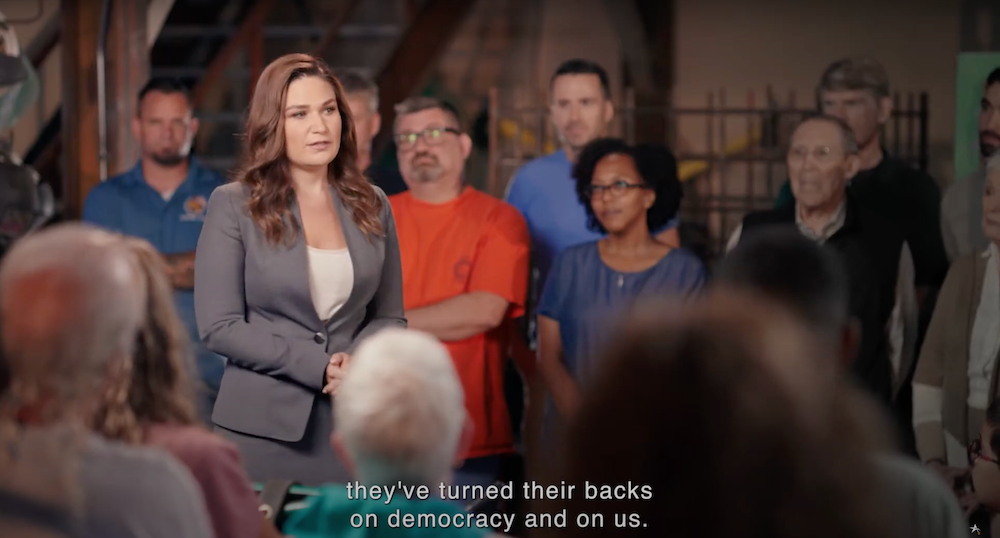 “I’m running for Senate because Democracy is worth fighting for and Iowa is worth fighting for,” said Abby Finkenauer. “My dad was a union pipefitter-welder, and my mom worked in the local public schools, and they couldn't give me a trust fund or debt free college — but they taught me that when there's work to be done, you do it. I believe that Iowans deserve jobs that aren’t just paychecks but pay enough to build a future, health care that’s affordable, and the opportunity to succeed right here at home in Iowa. And I intend to get it done.”

Abby comes from a working-class family in Dubuque County. Her father is a retired Union pipefitter-welder, and her mother worked for the Dubuque Community Schools. She learned the value of public service and giving back to the community from her family, including her grandfathers — her mother’s father served as Lieutenant in the Dubuque Fire Department, and her father’s father earned a Purple Heart serving our country in World War II. Her family couldn’t give her a trust fund or debt-free college, but they taught her more important values – how to treat people with respect, to never think you’re better than anyone else, and that when there is work to be done or a problem to solve you say “yes.”

Abby channeled her family’s tradition of public service by running for the Iowa House of Representatives when she was just 24 years old – and winning. While serving in Des Moines, Abby was proud to fight for working families like hers. She opposed massive corporate giveaways to out-of-state companies, fought to make high-quality healthcare available to all Iowans and supported high-quality education for all students.

Four years later, Abby ran for Congress, went on to become the youngest woman to flip a congressional seat from red to blue and became one of the first women to represent Iowa in the House of Representatives. On her first day on the job, Abby walked into her congressional office with her dad’s old sweatshirt under her arm – a sweatshirt peppered with burn holes from his days as a union pipefitter-welder. She brought it with her to always remind her why she was there: to fight for the people of Iowa.

In Congress, she was proud to become the youngest women ever to pass a bill in the House when she worked with Republicans to help small businesses grow. Introducing more than 20 bipartisan bills, she funded the Children’s Health Insurance Program, strengthened Iowa’s flood prevention infrastructure and fought for Iowa’s schools and rural communities by being willing to work with anyone, of either party, to get things done.

A lifelong Iowan who chose to stay in Iowa even while watching so many of the friends she grew up with move out of state, Abby and her husband Daniel were married in August 2020 in their backyard in Cedar Rapids, where they continue to reside.