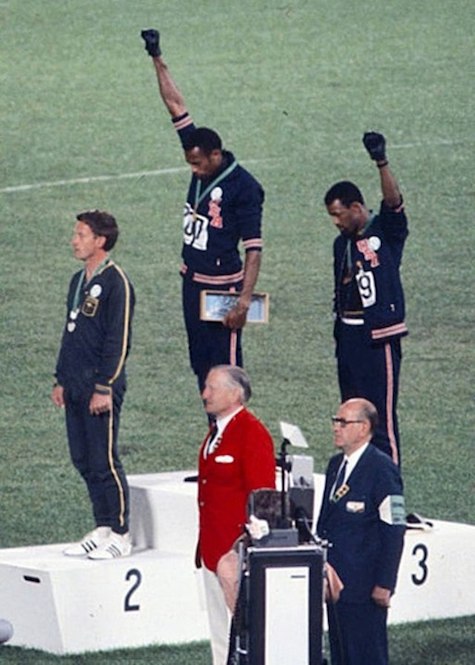 Herb Strentz reviews the most famous 200-meter final in Olympic history and its aftermath. -promoted by Laura Belin

With the 2021 Olympics nearing the finish line, one of many track events to watch will be the 200-meter men’s final, scheduled for Wednesday, August 4.

While we don’t know who this year's finalists will be, we can say with certainty the 1968 final for the 200-meter distance will be revisited, as it is every Olympiad and many times between.

Judging from past press coverage, Peter Norman will not be mentioned. That’s because on the 200-meter victory stand, two Black Americans, Tommie Smith (gold medalist) and John Carlos (bronze) raised gloved fists in a Black Lives Matter protest — back then it was called Black Power.

Bear with me. Over the years, I’ve been more and more fed up with how our press seldom identifies and outright ignores "What’s His Name?"--also known as Peter Norman, the silver medalist and third person on the victory stand.

Here are some useful perspectives on that historic 200-meter medal ceremony and its aftermath.

Carlos and Smith were ousted from the Olympic Village and harshly criticized for bringing politics into sport. Norman may have suffered even more in his native Australia, in which white supremacy was a government policy into the 1970s. He never was accepted for the Australia Olympic team again, even though he set and briefly held the 200-meter world record in a 1968 heat, and his subsequent performances warranted Olympic status in 1972.

A pariah in his own country, Norman was invited to be part of the U.S. Olympic delegation when the Olympics were held in Sydney, Australia, in 2000. He died in 2006; Smith and Carlos were among his pallbearers. The Australian Parliament apologized for his mistreatment in 2012.

News coverage and commentary in the U.S. was, to put it mildly, unsympathetic to the Black Power protest. Perhaps the most quoted line from that coverage came from Brent Musburger. He went on to become a famed sports broadcaster, but as a 29-year-old columnist for the Chicago American in 1968, he wrote, “Smith and Carlos looked like a couple of black-skinned storm troopers.”

By far, the strongest media voice in support of Smith and Carlos (and Black athletes generally) was the ABC sports personality, Howard Cosell. He blasted the U.S. Olympic Committee for decreeing that Black athletes should be well-behaved participants and not protest their years of suffering before the games, oppression to which they would return afterward. The two-minute video from October 1968 is worth watching in its entirety. Partial transcript:

The U.S. Olympic Committee, in the manner of the fabled village of Brigadoon, appears on the scene once every four years. It is, in the main, a group of pompous, arrogant, medieval-minded men who regard the games as a private social preserve for their tiny clique. They view participation in the games as a privilege, not as a right earned by competition.

They say the games are sports, not politics--something separate and apart from the realities of life. But the Black athlete says he is part of a revolution in America, a revolution designed to produce dignity for the Black man, and that he is a human being before he is an athlete.

He says his life in America is filled with injustice, that he wants equality everywhere, not just within the arena. He says that he will not be used once every four years on behalf of a group that ignores what happens to him every day of all the years.

He says he earns participation, wins fairly, and that he will use his prominence earned within the arena to better his plight outside of it. [...] He's aware of backlash but says he's had it for 400 years.

And so, the Olympic Games for the United States have become a kind of America in microcosm: a county torn apart. Where will it all end? Don't ask the the U.S. Olympic Committee. They've been too busy preparing for a VIP cocktail party next Monday night in the lush new Camino Royale.

An Olympic tradition of accepting bigotry

Avery Brundage, perhaps the dominant Olympic figure of the 20th century, viewed concerns about racism and discrimination with alarm. Brundage was president of the American Olympic Committee from 1928 to 1953 and president of the International Olympic Committee from 1952 to 1972, having been on the IOC since 1936. The record suggests he was as upset with the Smith-Carlos-Norman protest as he had been pleased with Adolf Hitler’s management of the 1936 Olympics in Berlin.

After meeting with Hitler and other Nazi officials, Brundadge assured those concerned they had nothing to fear about holding the 1936 Olympics in Berlin. Oliver Hilmes noted in a 2018 article for Slate,

Informed that Jews could not be members of a German sports club, Brundage replied, “In my club in Chicago, Jews are not permitted either.” The American visitor couldn’t recognize any discrimination in what he saw in Germany. After his return to the U.S., Brundage explained: “I was given positive assurance in writing … that there will be no discrimination against Jews. You can’t ask more than that and I think the guarantee will be fulfilled.”

Brundage blamed a Jewish-Communist conspiracy for urging a boycott of the Olympics because of Nazi actions against Jews. Thirty-two years later, he had to deal with another boycott threat. Activists formed the Olympic Project for Human Rights (OPHR) in late 1967, urging a Black boycott of the Mexico City games to protest racism and segregation. Norman wore an OPHR badge on the victory stand with Carlos and Smith.

Outraged by the medal ceremony protest, Brundage ordered Smith and Carlos expelled from the Olympic village and threatened to expel the entire U.S. track team if his order wasn’t carried out.

Most famous 1936 Olympian weighs in

Brundage was not the only major figure from the 1936 Olympics who attended the 1968 games. The Black American sprinter Jesse Owens had won four gold medals in Berlin, including the 200-meters. His Olympic victories were heralded as a rebuke to the Nazis’ claim to be a master race.

However, Owens was critical of Smith and Carlos.

These kids are imbued with the idea that there's a great deal of injustice in our nation. In their own way, they were trying to bring out what is wrong in our country. I told them that the problem certainly belonged in the continental borders of America. This was the wrong battlefield. Their running performances would have done more to alleviate the problem. Rather than the disrespect they showed to our flag and the discourtesy shown to the Mexican Government.

Owens also faulted the press for giving too much coverage to the protest. Sociologist Harry Edwards, a Black leader in the OPHR movement, wrote in his book Revolt of the Black Athlete that Owens had a "ridiculously naive belief in the sanctity of athletics.”

Where the medalists landed

Over time, the controversy once marked by death threats faded in the U.S. But is revived every Olympiad on television and in articles that typically do not mention Norman.

Smith and Carlos had brief careers in the National Football League. Smith received the California Black Sportsman of the Millennium Award in 1999. Carlos continued to participate in protests.

Norman remained vilified in Australia and was not recognized by his nation at the opening ceremonies of the 2000 Olympics, hence his invitation from the U.S. delegation.

Carlos remarked years later, “If we were getting beat up, Peter was facing an entire country and suffering alone.”

Even so-called in-depth coverage of the Olympics barely scratches the surface when it comes to the young men and women involved.