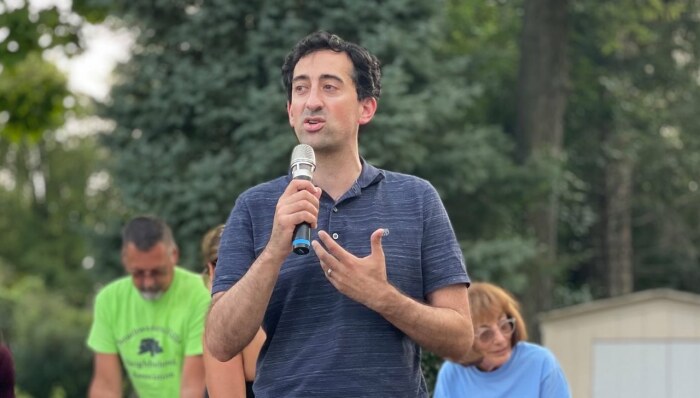 Climate change is on the ballot in Des Moines

The Intergovernmental Panel on Climate Change recently issued its Sixth Assessment Report on the Physical Science Basis of climate change. The report pulls together the best scientific knowledge about climate change, and it’s clear that the situation is more dire than ever. Human-caused climate change is undeniable. Its scale and scope are unprecedented, and its impacts are already being felt. Significant climate changes are inevitable, and we need to do everything we can to stem the bleeding.

At a bare minimum, every elected official should recognize the climate crisis and be committed to meet it head on.

When host Ed Fallon asked if climate change is happening, McAnelly responded, “So I’ve spent much of my life looking into the science of these things. Not a climatologist by any stretch of the imagination, but you know, you look at the history of our planet. Climate change as a concept is certainly something that I — it would be hard to question from the way that our planet ebbs and flows.”

When pressed on whether humans’ impact on the climate was as severe as the world’s best scientists have proved it is, McAnelly refused to take a firm stance on the issue. He said, “Sure. And that’s where I — that’s where the — my expertise ends, and we’d have to rely on the science to answer that question. So, I don’t have statistics today to tell you what that is.”

Fallon followed up again, only to get a similar response: “Yeah. I don’t know. You’d have— I don’t — I don’t have a particular paper in front of — and again […] I’m not trying to dodge the question.”

It sure sounded like he was trying to dodge the question. But that fits into the larger theme of McAnelly’s campaign: vague mission statements and no policy specifics.

His campaign website has a sustainability page that does not even mention “climate change.” He takes pains to avoid the term in his Facebook ad about sustainability as well. The special interest and Republican backers supporting his campaign apparently want him to be vague.

Let’s call this what it is: an anti-environment, special interest driven, Republican effort to win a city council seat.

Since being elected four years ago, Josh Mandelbaum has pushed for and passed climate policies that give Des Moines some of the most ambitious climate goals in the nation. He led the charge for the 24/7, 100 percent clean energy policy that set a new bar for cities adopting clean energy standards. He co-chaired the Energy Task Force, which led to the adoption of the city’s energy and water conservation benchmarking ordinance. He has championed the transition of the city vehicle fleet to electric vehicles and supported funding the urban forest master plan.

Josh has been at the forefront of the city’s recent progress on climate, and he will be able to get a lot more done if he wins a second term.

The choice this November is clear. We can elect a climate champion or a special interest-backed climate denier. We have the choice between bold policy solutions and empty political pandering.

I’ll be voting to re-elect Josh Mandelbaum in Ward 3 on November 2.

Editor’s note: Bleeding Heartland welcomes guest commentaries advocating for Democratic or progressive candidates in local, state, or federal elections. Please read these guidelines and contact Laura Belin if you are interested in writing.