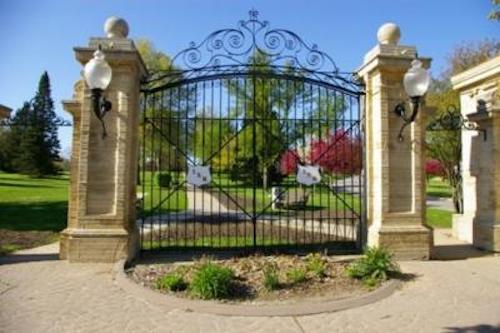 The state-run Iowa Veterans Home in Marshalltown is back on COVID-19 outbreak status after four residents tested positive in recent days.

Clinical Support Director Kimberly Bratland informed relatives and guardians of residents via email on August 20 that a resident with symptoms tested positive and was transferred to a hospital. Subsequent emails reported two residents testing positive on August 22 and one on August 23; their symptoms were mild and they were moved to the home’s COVID unit. All of the affected residents live in the Malloy 2 unit of the facility, which is Iowa’s largest nursing home.

Under U.S. Center for Medicare and Medicaid Services guidelines, nursing homes must promptly notify families of residents whenever there is “either a single confirmed infection of COVID-19, or three or more residents or staff with new-onset of respiratory symptoms occurring within 72 hours of each other.”

According to long-term care facility data compiled by Sara Anne Willette, the latest outbreak is the sixth at the Marshalltown facility, using the Iowa Department of Public Health’s definition of three or more COVID-19 cases among nursing home residents. The previous outbreak began in late June and officially ended on July 26. However, emails have periodically informed families of employee cases since then: one on July 30, three on August 4, one on August 10, and one on August 12. Another three employees tested positive on August 22 and two more did on August 23.

Bratland’s emails did not clarify whether any of the affected residents or staff had been vaccinated for COVID-19. The veterans home has restricted visits in all buildings, and in the two units where the newly infected people were living or working, in-person visits may occur only outdoors, for at most 20 minutes, with social distancing and all people masked.

Communications staff for the Iowa Veterans Home did not respond to Bleeding Heartland’s questions on August 23 about current vaccination rates and efforts to promote COVID-19 vaccines. In June, the home informed relatives and guardians that 95 percent of residents and 70 percent of staff had been vaccinated. At that time, the facility was holding a vaccine clinic every two weeks, available to all residents, staff, and family members.

The Iowa Veterans Home is not subject to the U.S. Department of Veterans Affairs policy requiring vaccines for federal health care personnel in the VA system. However, the state employees who work there will be subject to a forthcoming Biden administration policy requiring that long-term care staff be fully vaccinated against COVID-19 as a condition of their employers participating in the Medicare and Medicaid programs.

The Iowa Department of Public Health stopped disclosing details about nursing home outbreaks in early July, when the state’s official COVID-19 website switched to weekly reporting and removed some pages. As of August 18, coronavirus.iowa.gov showed only that four long-term care facilities somewhere in Iowa had active outbreaks. That number would not have included the veterans home, which had not yet identified new resident cases.

Willette updates the long-term care section of her Iowa COVID-19 Tracker website frequently with information from federal government databases, but it can take days or weeks for Iowa cases to be recorded on federal websites.

UPDATE: Bratland informed families and guardians on August 24 that three more employees had tested positive. Two were working in the Malloy building, where most of this summer’s cases have been concentrated. The third was working in the Ulery building.

SECOND UPDATE: According to emails sent on August 26 and 27, one more resident (living in Ulery) and two more employees (working in Malloy and Ulery) tested positive. The resident who was diagnosed on August 26 was taken to the hospital, and one of the residents who had been in the veterans home’s COVID unit was transferred to the hospital. So three of the five residents currently infected are hospitalized and two remain in the COVID unit.

THIRD UPDATE: Three more veterans home employees tested positive on August 30 or August 31. No more residents have been infected, according to emails families received. As of August 31, four residents are recovering in the home’s COVID unit and one remains in the hospital.