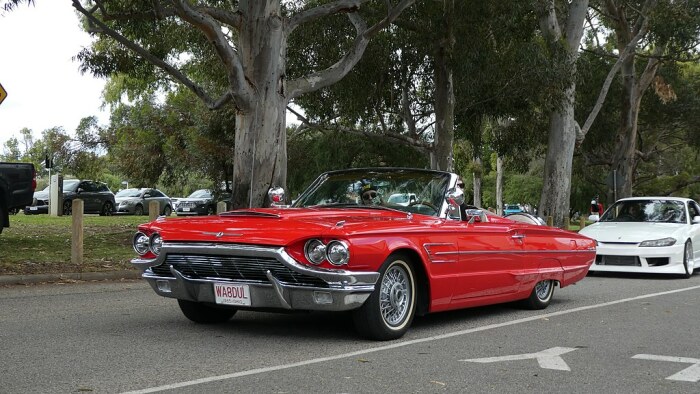 Ira Lacher: With his COVID-19 vaccine mandate, President Joe Biden has taken the T-Bird away. Someone had to.

“@JoeBiden see you in court,” Gov. Kristi Noem of South Dakota tweeted. “Not on my watch in Texas,” chirped Ken Paxton, that state’s chief law enforcement official, who faces trial for two counts of securities fraud. And just in case anyone forgot what this is really all about, Arizona Gov. Doug Ducey added: “the Biden-Harris administration is hammering down on private businesses and individual freedoms in an unprecedented and dangerous way.”

Right. President Biden’s executive order requiring millions of Americans to get the COVID-19 vaccine, damn it, has nothing to do with ending a planetary crisis that has killed four and a half million persons around the world, including 660,000 Americans. It’s about impinging on personal freedom — to put fellow Americans six feet under.

“While we need to espouse freedom as liberty of action,” argues Dr. John W. Ray, who teaches political philosophy, political science, and ethics at Montana Tech University in Butte, “we must not lose sight of freedom as pursuing the common good. Given the prevalent view of freedom as absence of constraint, no wonder civil society is atrophying,” Ray continued in a guest essay published in that city’s Montana Standard newspaper. “We have lost sight of our public duty to promote the general welfare and replaced it with a ruinous egoistic self-absorption that threatens our destruction.”

Ray based his argument on Aristotle, but he could easily have based it on the Christian Bible. In Peter 2:15-16 we read: “For it is the will of God that by doing right you may silence the ignorance and irresponsible criticisms of foolish people. Live as free people, but do not use your freedom as a cover or pretext for evil, but as bond-servants of God.”

And in Galatians 5:13 we read: “For you were called to freedom, brothers. Only do not use your freedom as an opportunity for the flesh, but through love serve one another.”

Aw, why even bother quoting Christian Scripture when more than half of white evangelicals say they’re never going to get the vaccine? (Of course, they are the first to claim “religious freedom” from getting the jab, even to the point of writing checks to self-proclaimed holy men in exchange for a get-out-of-vaccine-free card. )

It’s legitimate, under America’s laws and precepts, to claim freedom of religion when declining to work on a day of high worship, just as it is to claim freedom of speech when regurgitating medical misinformation, and claim personal freedom when driving a motorcycle without a helmet, drinking to excess, and smoking three packs a day. But when those actions impinge on the freedoms of others, it is clear that we, as a society, have abused them.

So now we have what nearly everyone in government tried to avoid — a top-down edict mandating that people get a coronavirus vaccine. Which has “patriots” bleating in unison, “Authoritarianism on the march!”

But does it make me, along with 6 in 10 Americans, an authoritarian by wanting to, without worry of getting COVID-19, eat at a restaurant, applaud my favorite rock band, fly on a commercial airliner, or cheer on my favorite team?

Let’s be clear: Britannica defines authoritarianism as “blind submission to authority” and goes on to say, “Authoritarian leaders often exercise power arbitrarily and without regard to existing bodies of law …” But according to experts in constitutional law, the Biden mandates are legal. Notably, as far back as 1905, the Supreme Court, in a Massachusetts case concerning smallpox, affirmed the federal government’s right not only to order a vaccine mandate but to define the balance of individual rights and freedoms versus society’s. In the court’s 7-2 majority opinion in Jacobson v. Massachusetts, Justice John Harlan wrote:

“The possession and enjoyment of all rights are subject to such reasonable conditions as may be deemed by the governing authority of the country essential to the safety, health, peace, good order and morals of the community. Even itself, the greatest of all rights, is not unrestricted license to act according to one’s own will. It is only freedom from restraint under conditions essential to the equal enjoyment of the same right by others. It is then liberty regulated by law.”

This puts the lie to the decades-long myth clung to by millions of Americans: that personal freedom is an absolute. Does my freedom impinge on you? Screw you; if you don’t like it, leave. So we see the ludicrous spectacle of 80 million unvaccinated people refusing to do what is absolutely necessary to stop another hundred seventy thousand of our friends, neighbors, sons, daughters, parents, children, grandparents, and even grandchildren from dying before Valentine’s Day 2022.

Yes, we have abused our personal freedoms. Or, in the lyrics of a classic Beach Boys tune, we’ve been having fun, fun fun in the T-Bird belonging to our old man, cruising to the hamburger stand instead of the library, with the radio blasting, going as fast as we can.

Yeah, with his far-reaching vaccine mandate, our old man, Joe Biden, has taken the T-Bird away. Someone had to.