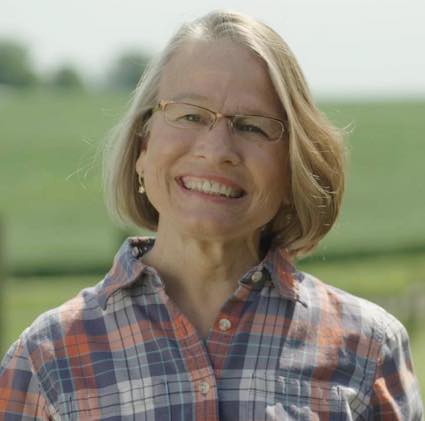 The article wasn't true. The website that published it even has a disclaimer: "All stories herein are parodies (satire, fiction, fake, not real) of people and/or actual events."

Most politicians would delete the tweet and apologize, or (if they were cowards) blame the mistake on a staffer.

Miller-Meeks won't take the tweet down. It's not the first time the Republican from Iowa's second district has refused to retract false information about the COVID-19 pandemic.

Miller-Meeks should have realized the article she shared was literally fake news. In comments her office provided to some media outlets, she claimed to have known the story was "obviously satire."

"I retweeted a story about President Biden requiring the VA to withhold benefits from unvaccinated veterans, saying 'if true, this is insane.' The story and website is obviously satire and makes a powerful point. President Biden’s executive orders about COVID-19 have been classic examples of government overreach and these days the unbelievable has become reality."

Miller-Meeks continued: "With Americans trapped in Afghanistan, a immigration crisis on the southern border, and an unconstitutional overreach by President Biden to mandate COVID-19 vaccines, the media surely has more important things to cover than satirical tweets."

Sarah Beckman of Local 5 television in Des Moines "asked for clarification on what 'powerful point' the article made, but a spokesperson declined to further clarify."

Miller-Meeks' tweet was not satire. She could have said something like, this fake story is almost believable, given the Biden administration's overreach. Instead, she implied the story was true. 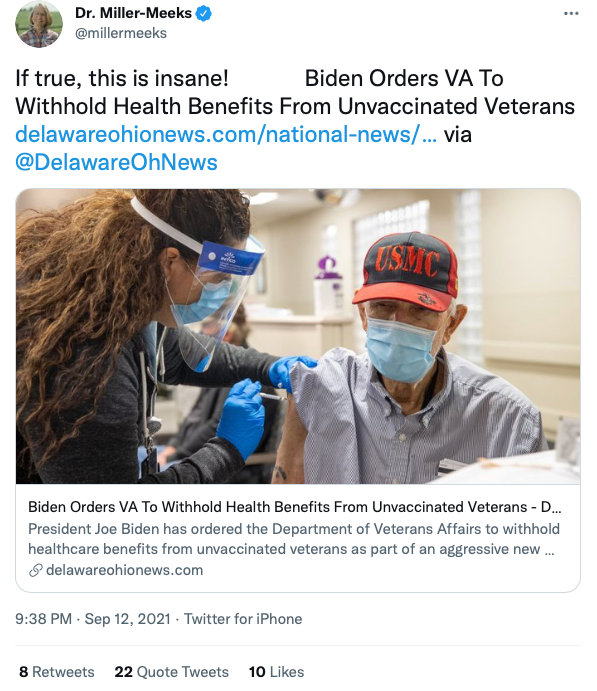 Many people don't click through to read articles shared on social media. They see only the headline and blurb. One Iowa veteran who came across Miller-Meeks' tweet was so worried about losing his benefits that he wrote to KCRG-TV, complaining, "I’ve fought my wars, I sacrificed my body and I was told the VA and federal government would be there to take care of us. All my brothers’ and sisters’ health are being held hostage.”

At this writing, Miller-Meeks still hasn't deleted the tweet.

Unfortunately, it's not an isolated example of her refusing to correct the record after spreading misinformation about the pandemic.

WON'T WALK BACK "ABSOLUTELY FALSE" STATEMENTS ABOUT KIDS AND COVID-19

When the Fact Checker asked Miller-Meeks’s staff to provide sourcing for these claims, they sent a column printed in August 2020 in the journal of the American Pediatric Association. The authors are William Raszka, a pediatric infectious disease specialist at the University of Vermont, and Benjamin Lee, a pediatrician at the University of Texas Southwestern Medical Center.

The doctors cited five studies early in the pandemic examining whether children were passing the coronavirus. [...]

“I never said or wrote that children don’t transmit the virus,” he said in a phone interview. “That is incorrect. That is absolutely false.”

Miller-Meeks' staff never replied to any of my emails asking whether she would retract that claim in light of new evidence about Delta variant spread among children. Her deputy chief of staff Austin Harris complained on Twitter, "While you hide behind your keyboard and pretend to be perfect, a doctor and public health official not only encouraged vaccines but vaccinated her own constituents."

Encouraging vaccinations is admirable, but not an excuse for misleading Iowans about other aspects of the pandemic. Tens of thousands of Miller-Meeks' constituents are crammed into school buildings where the virus spreads easily. Most of them are too young to be vaccinated for COVID-19.

Only two weeks into the new academic year, some schools in the second Congressional district were reporting more than 10 percent of students absent due to illness. The Delta variant is now responsible for an estimated 99 percent of new coronavirus infections in Iowa.

Being a doctor and former director of the Iowa Department of Public Health has been an important part of Miller-Meeks' political brand. Months ago, she repeatedly called on House Speaker Nancy Pelosi to "follow the science" and rescind the mask mandate on the U.S. House floor for those fully vaccinated for COVID-19. She also serves on the House Select Subcommittee on the Coronavirus Crisis.

Because of Miller-Meeks' professional background, her comments about the pandemic may carry more weight with some Iowans. She could be encouraging people to "follow the science" by wearing masks voluntarily in crowded indoor spaces.

I don't know why Miller-Meeks won't walk back her false statements. Perhaps she has determined that pandering to COVID deniers benefits her politically. (Many heavily Republican counties in IA-02 have low vaccination rates.) Perhaps, like Donald Trump, she finds it difficult ever to admit a mistake.

Whatever her reasons, it's unacceptable for any elected official to knowingly spread misinformation, especially when those unsubstantiated claims put the public at risk.

UPDATE: The editorial board of the Ottumwa Courier (Miller-Meeks' hometown newspaper) published a brutal commentary on "Miller-Meeks and her irresponsible tweets." Excerpts:

What powerful point could a fake story possibly make? How is a congresswoman promoting fake, satirical news as though it could be real, not of legitimate newsworthiness? [...]

Sunday's Tweet was far from her first offense. Miller-Meeks — an eye doctor and not an expert on vaccines or infectious disease — has promoted natural immunity as being supreme to COVID-19 vaccinations. There isn't enough information to make that statement, but even if there were it sends the wrong message. It’s better to get immunity from COVID-19 through a vaccine than waiting to get infected. And those who have had prior infection still have a lot to gain by getting vaccinated. [...]

In July, she tweeted that children "don't transmit virus to adults or other children." She appeared on a Fox Business show with a similar message. We know that statement is patently false. Last week, children accounted for a third of new cases in Iowa.

We get that Miller-Meeks is not a supporter of President Joe Biden. Clearly, he will make mistakes much like any president, and there will be plenty of policy differences. Whether vaccinations should be mandated by the government is certainly a topic ripe for debate. However, before she turns to hyper-partisanship, we remind her she lost her first three runs at Congress, and only won her fourth attempt by six votes.