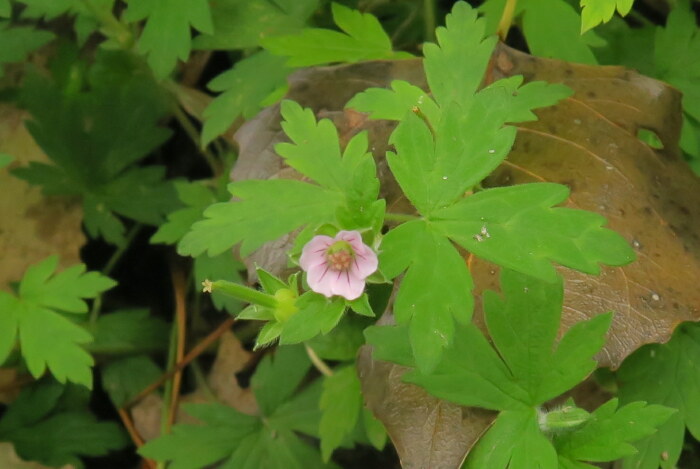 I was excited to find a patch of “new” (to me) wildflowers near the banks of North Walnut Creek a few weeks ago. Since I wasn’t familiar with these small pink flowers, I posted a few photos to the Iowa wildflower enthusiasts Facebook group. Lora Conrad quickly identified the plants as Siberian Cranesbill (Geranium sibiricum).

As the common name suggests, this species originated in Eurasia, not North America. Although I usually showcase native plants for Bleeding Heartland’s wildflower series, today will be one of my occasional exceptions.

Minnesota Wildflowers offered tips for distinguishing Siberian Cranesbill from the similar-looking native Bicknell’s Cranesbill. As Lora explained, the plant I photographed has single flower stalks, is hairy, and blooms in August and September—all signs pointing to the introduced species. The habitat (partial sun, loamy soil, near disturbed ground) is also consistent with where this species often thrives.

Illinois Wildflowers describes Siberian Cranesbill leaves as “1½–3″ long and across; they are palmately cleft into 3-5 pointed lobes, while their margins are coarsely dentate and often subdivided into smaller pointed lobes.” 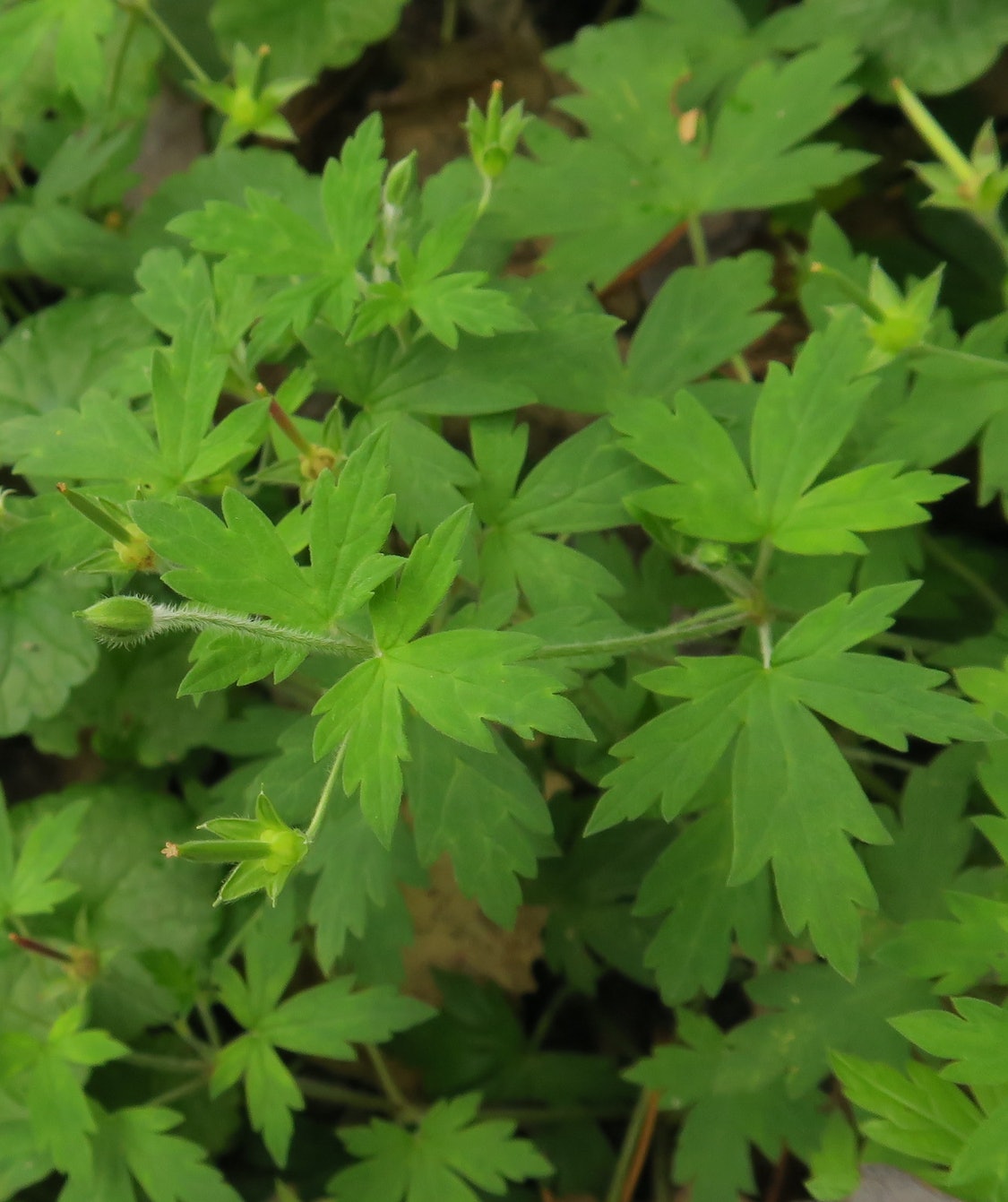 Some plants had buds not yet open on September 3. One of them is near the center of this image. Most of the plants had already bloomed, and you can see the developing fruit capsules that inspired the “cranesbill” part of the common name. 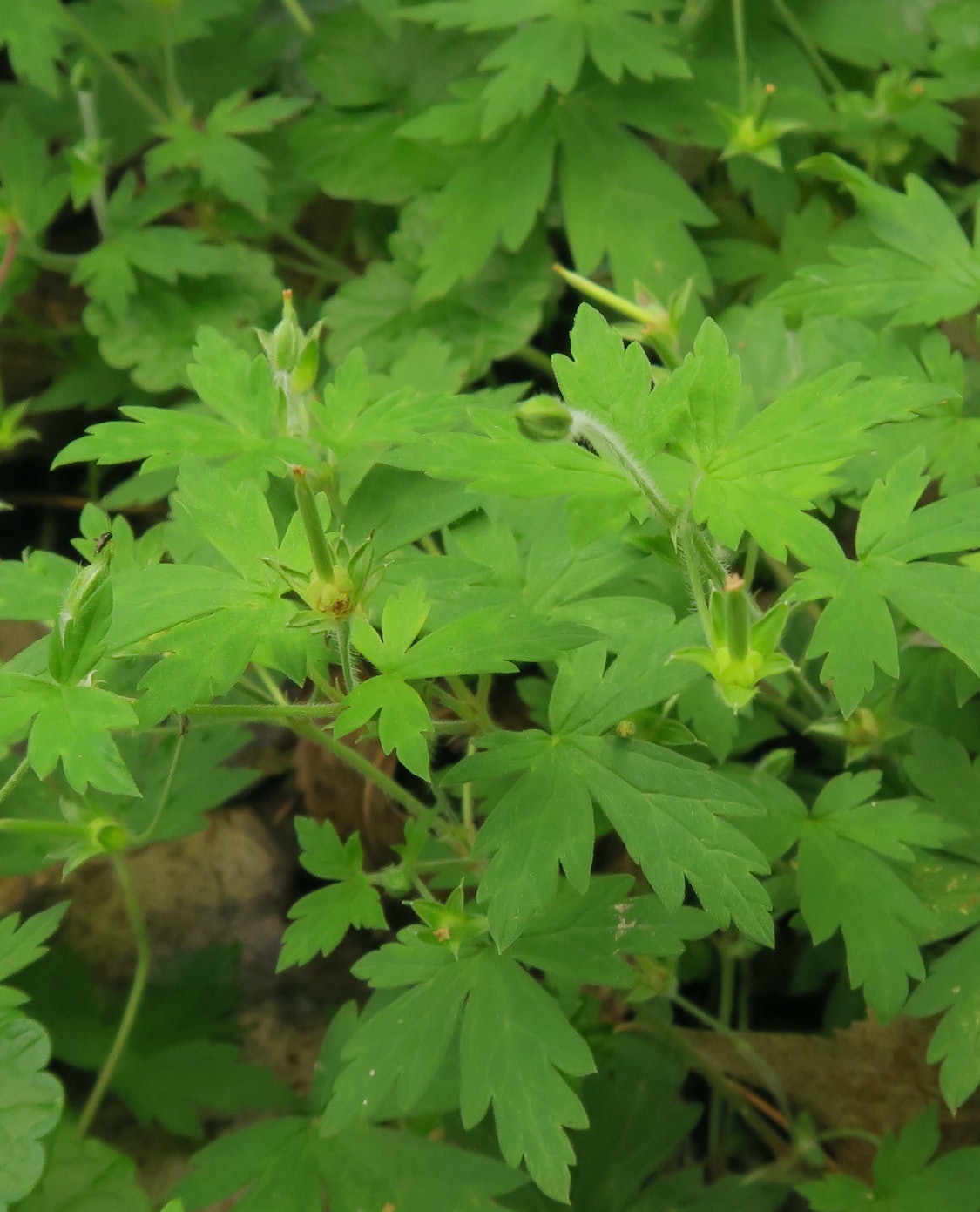 I had hoped this species was native, since many native wildflowers have five petals. But so does Siberian Cranesbill. The petals can range in color from white to light pink; all have darker pink lines. 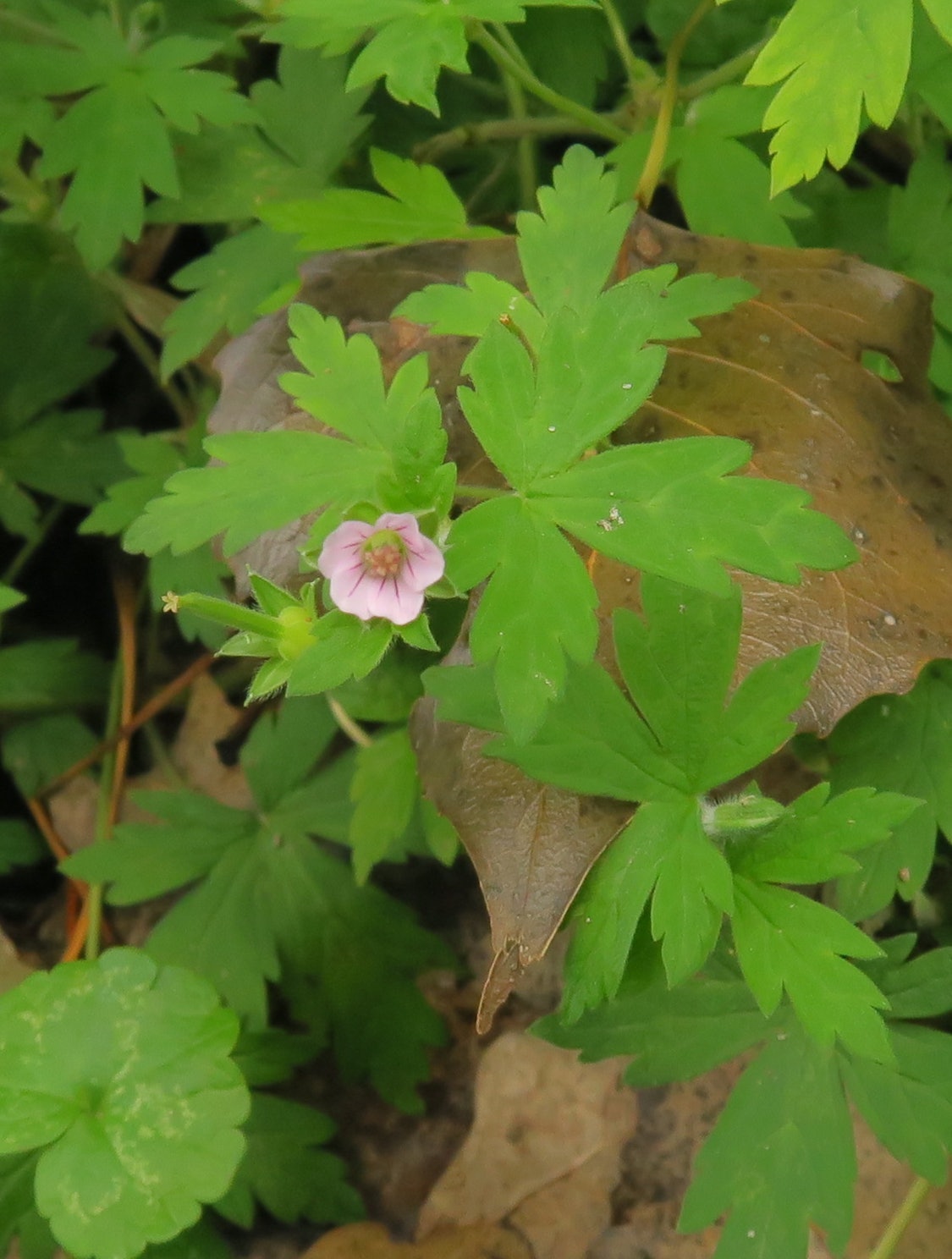 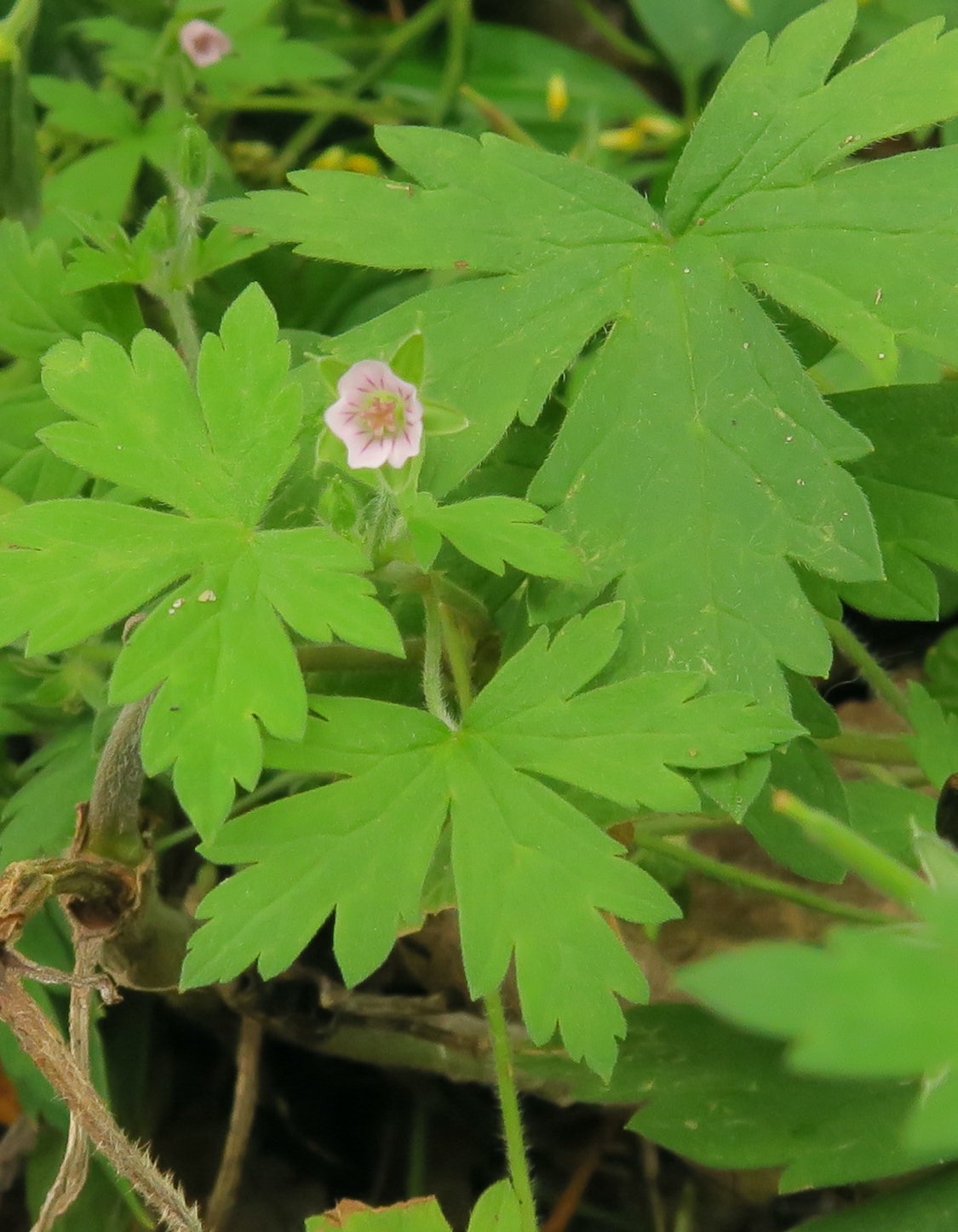 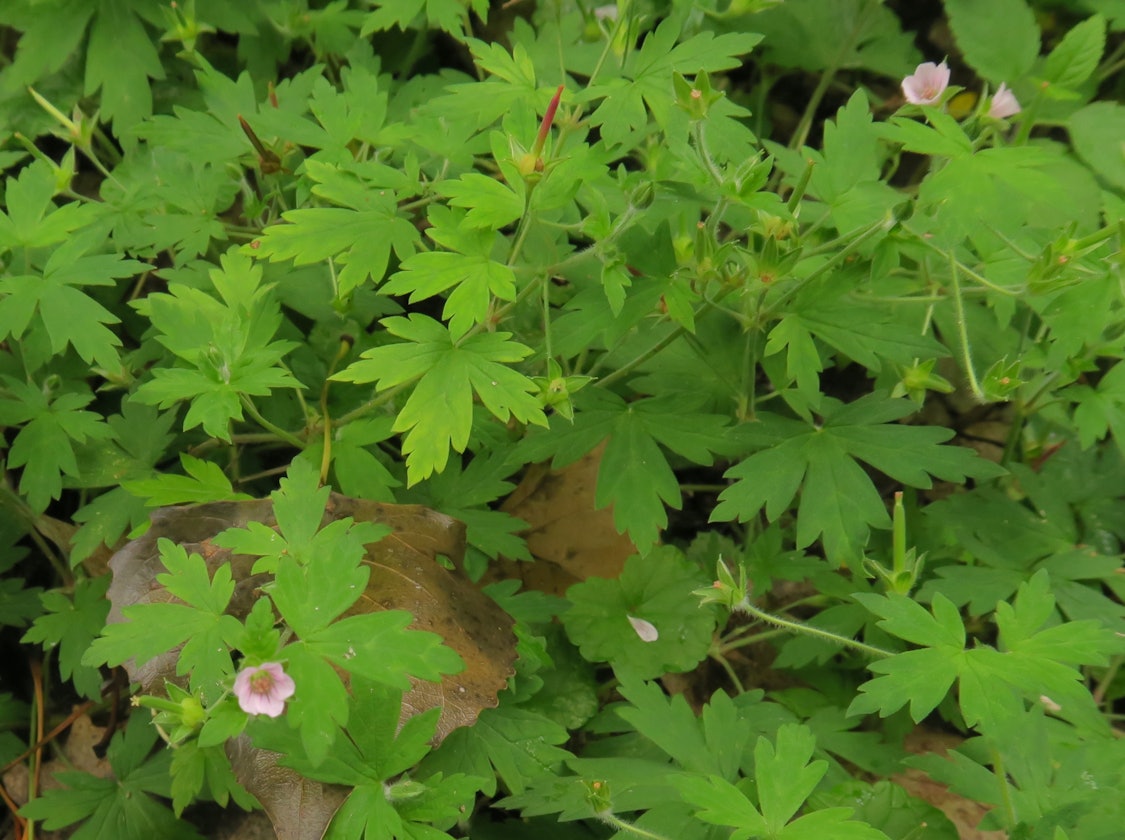 You can see the stems and bracts more clearly in this picture. 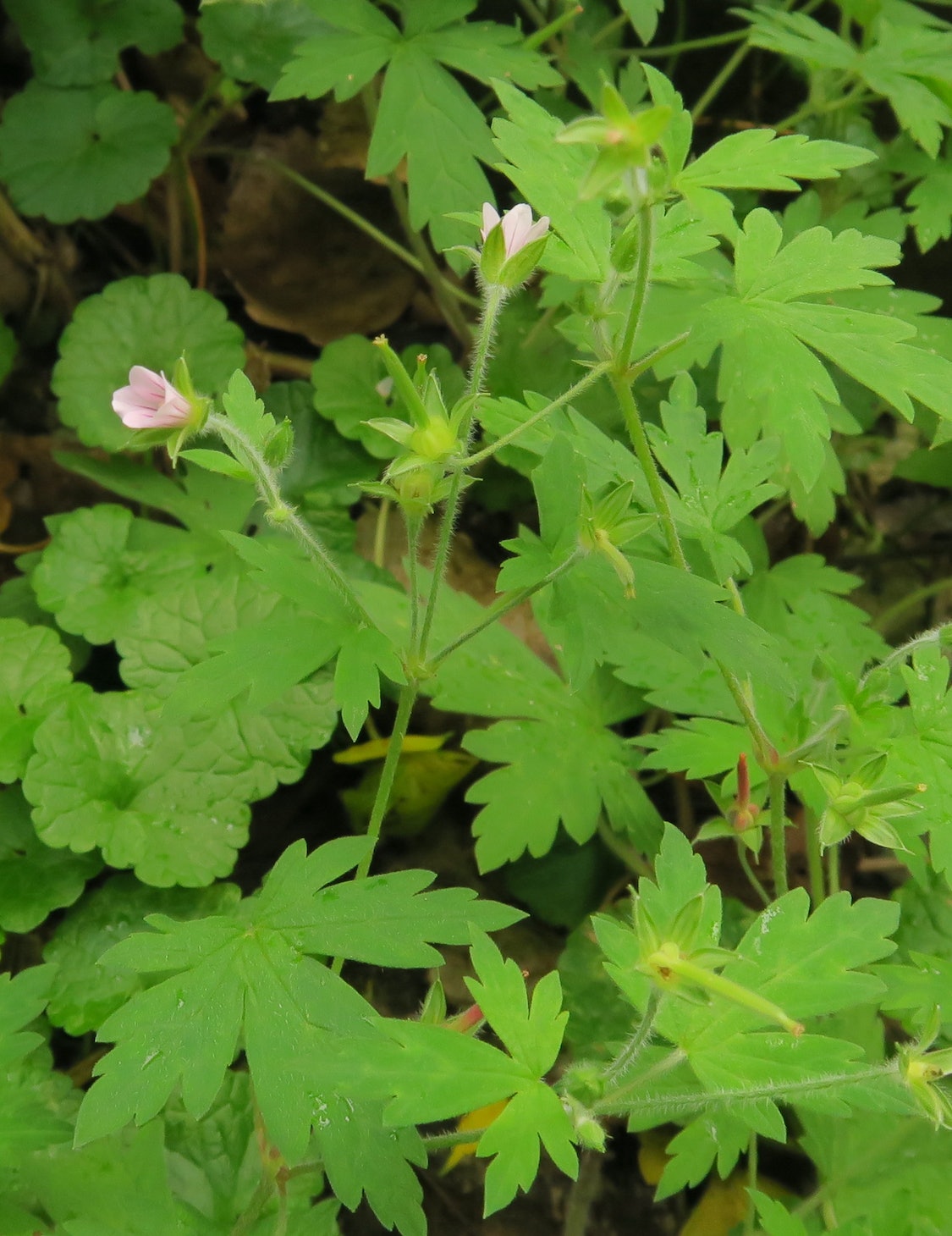 Siberian Cranesbill tends to stay close to the ground. In this patch, few plants were more than one foot tall. 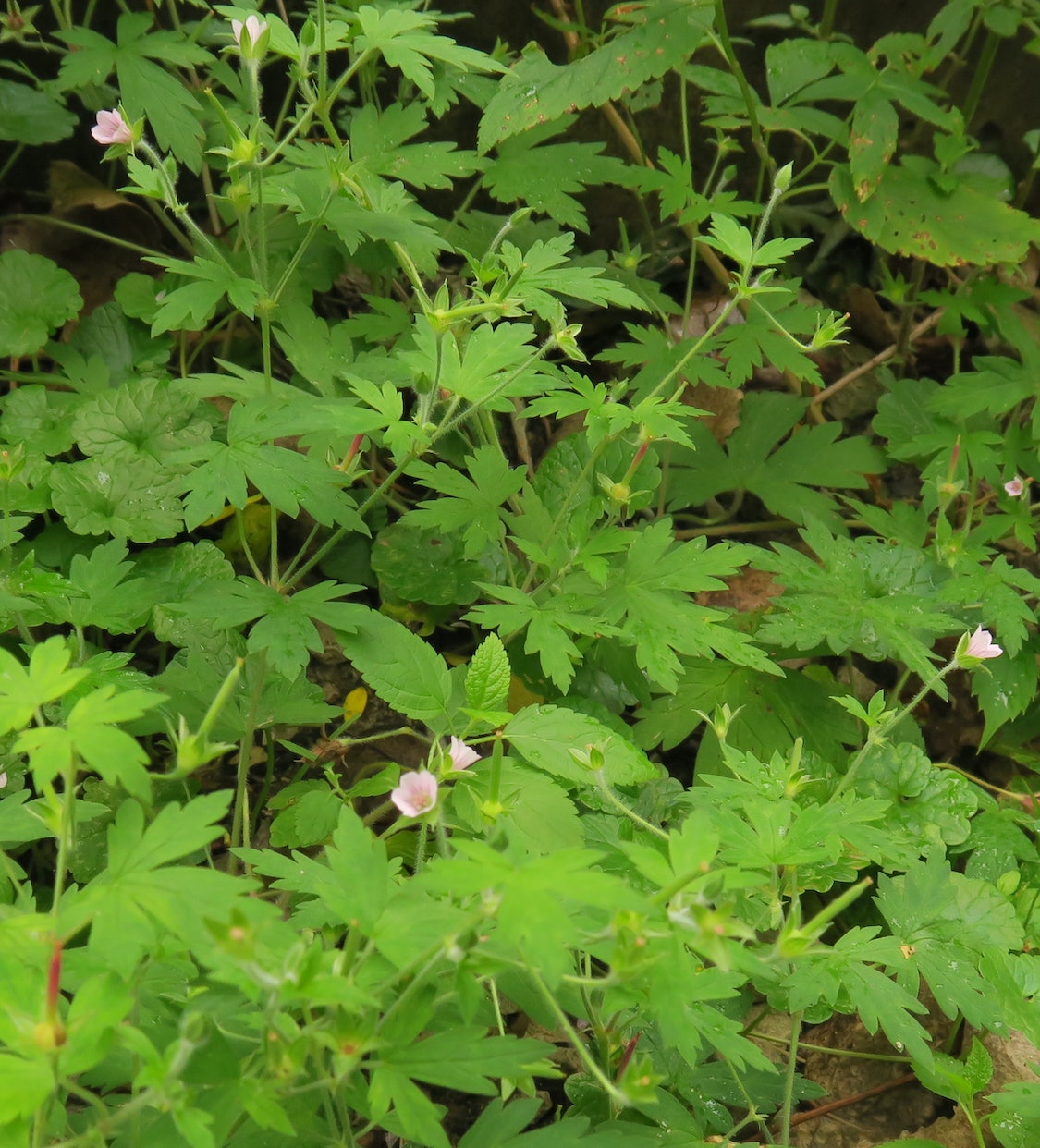 Wingstem are abundant in this area of Windsor Heights. Those plants usually reach heights of four to seven feet, but a few had recently blown over near the Siberian Cranesbill, so the flower heads were at roughly the same level. 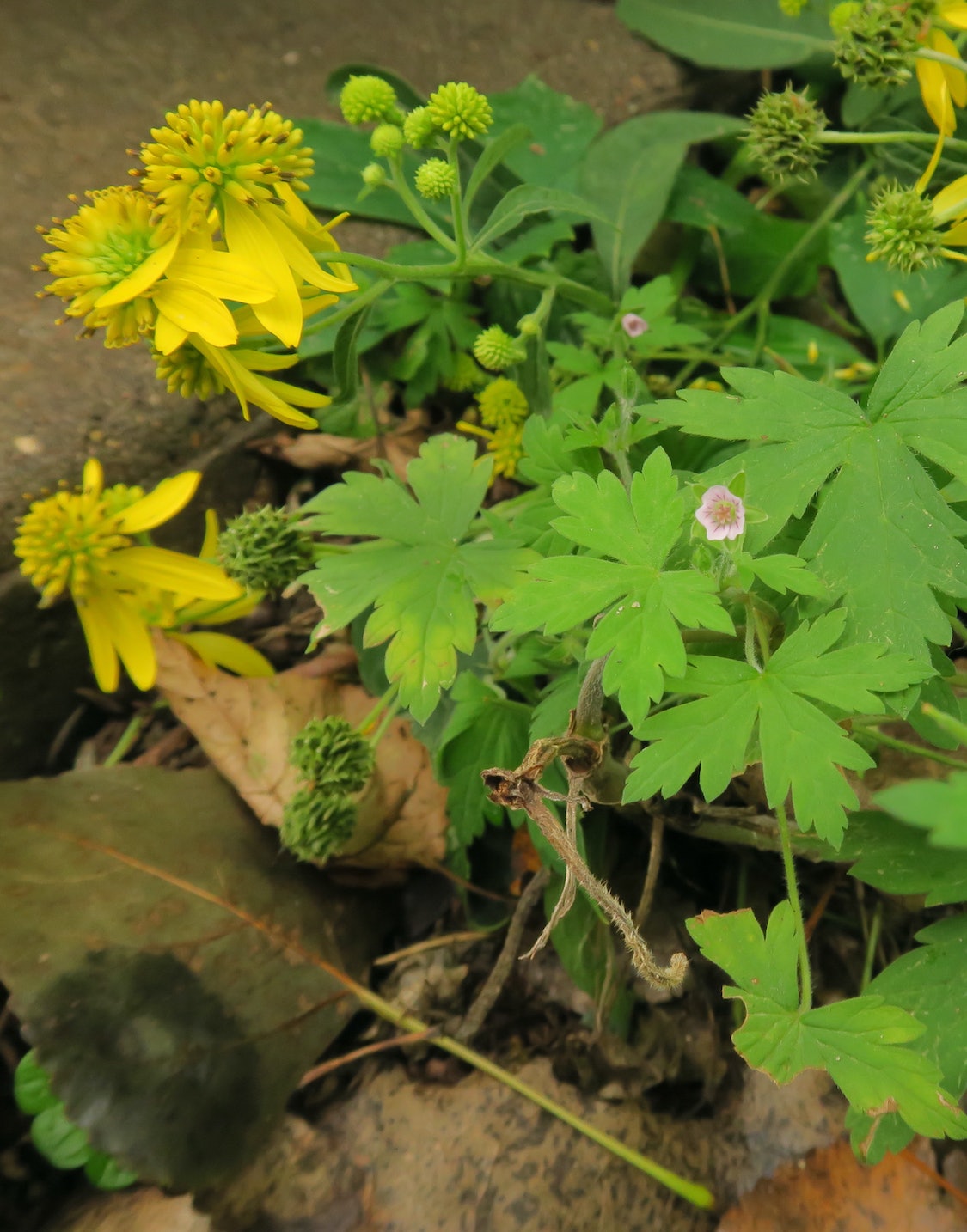 Fruit is an erect capsule-like structure ½ to 1 inch long with the persistent sepals around the base. In the center is a slender column divided into five sections, each attached at its base to an oval shaped carpel containing a single seed.

As the column drys and splits apart along its seams, the carpels are sprung upward, ejecting the seeds outward.

You can see lots of fruit developing in the next photo.

When I went back to this area on September 19, almost all the flowers were gone, and some fruit capsules were starting to turn brown. 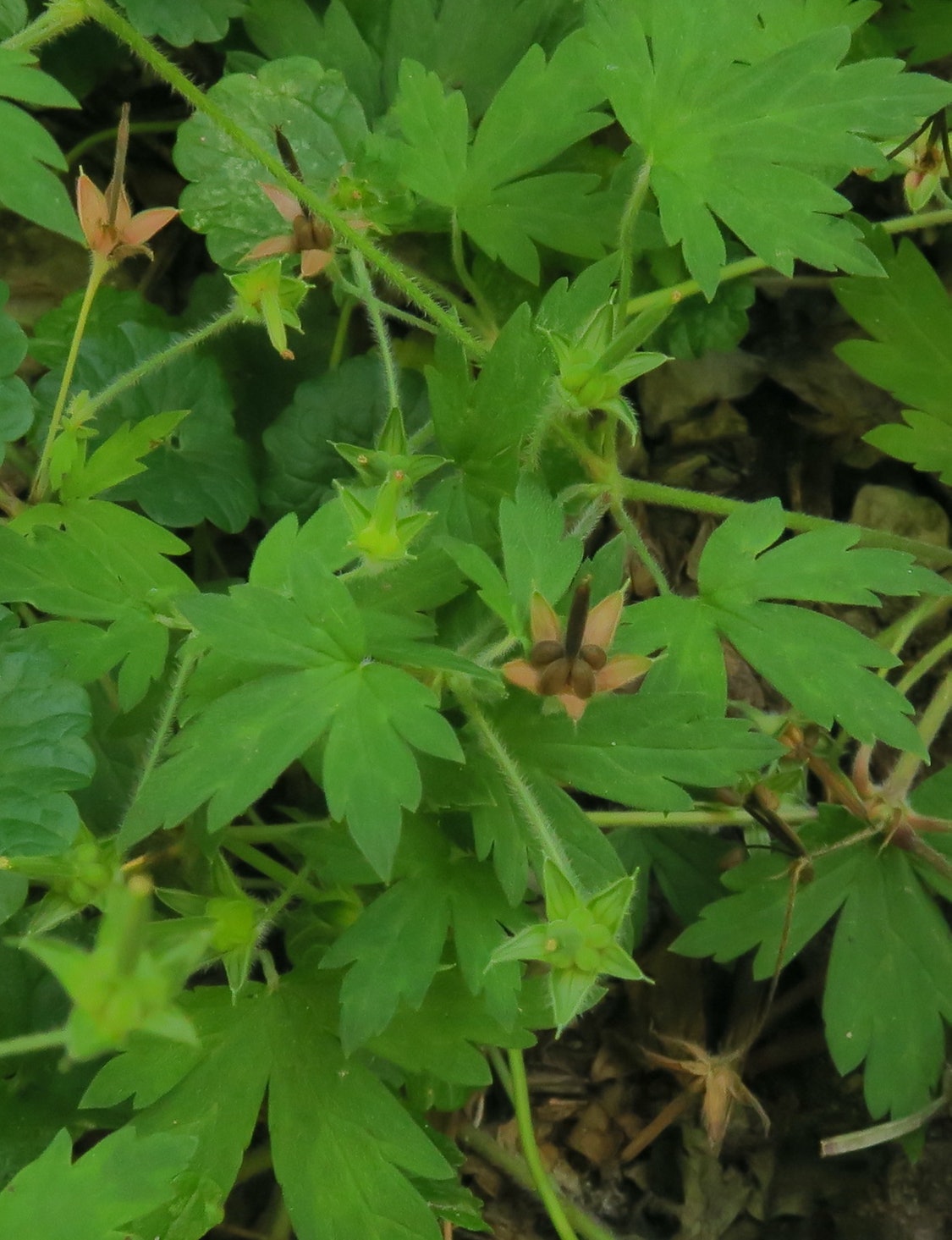 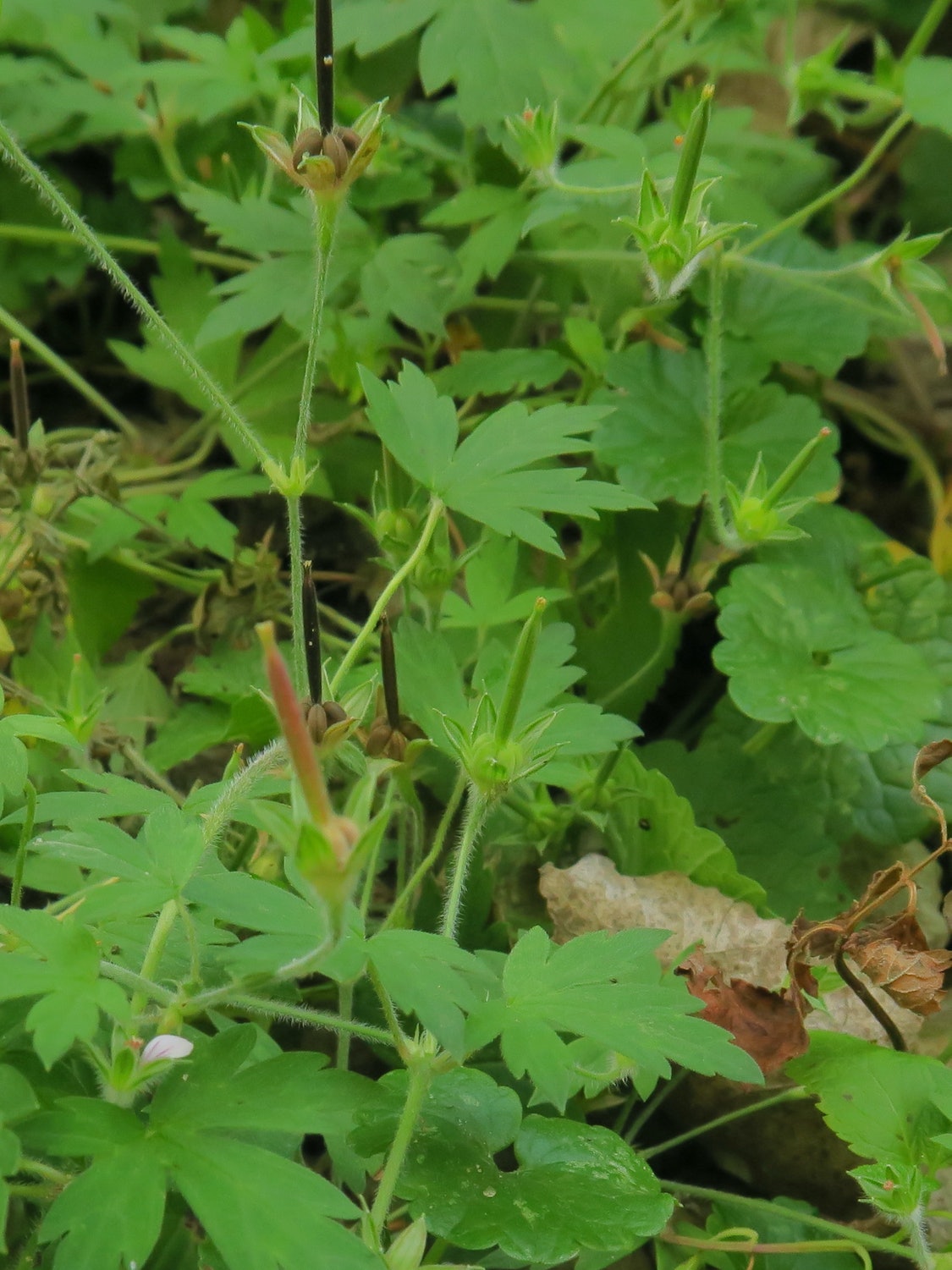 LATE UPDATE: I returned to this area in early October to photograph the fruit capsules that had split off from one another. 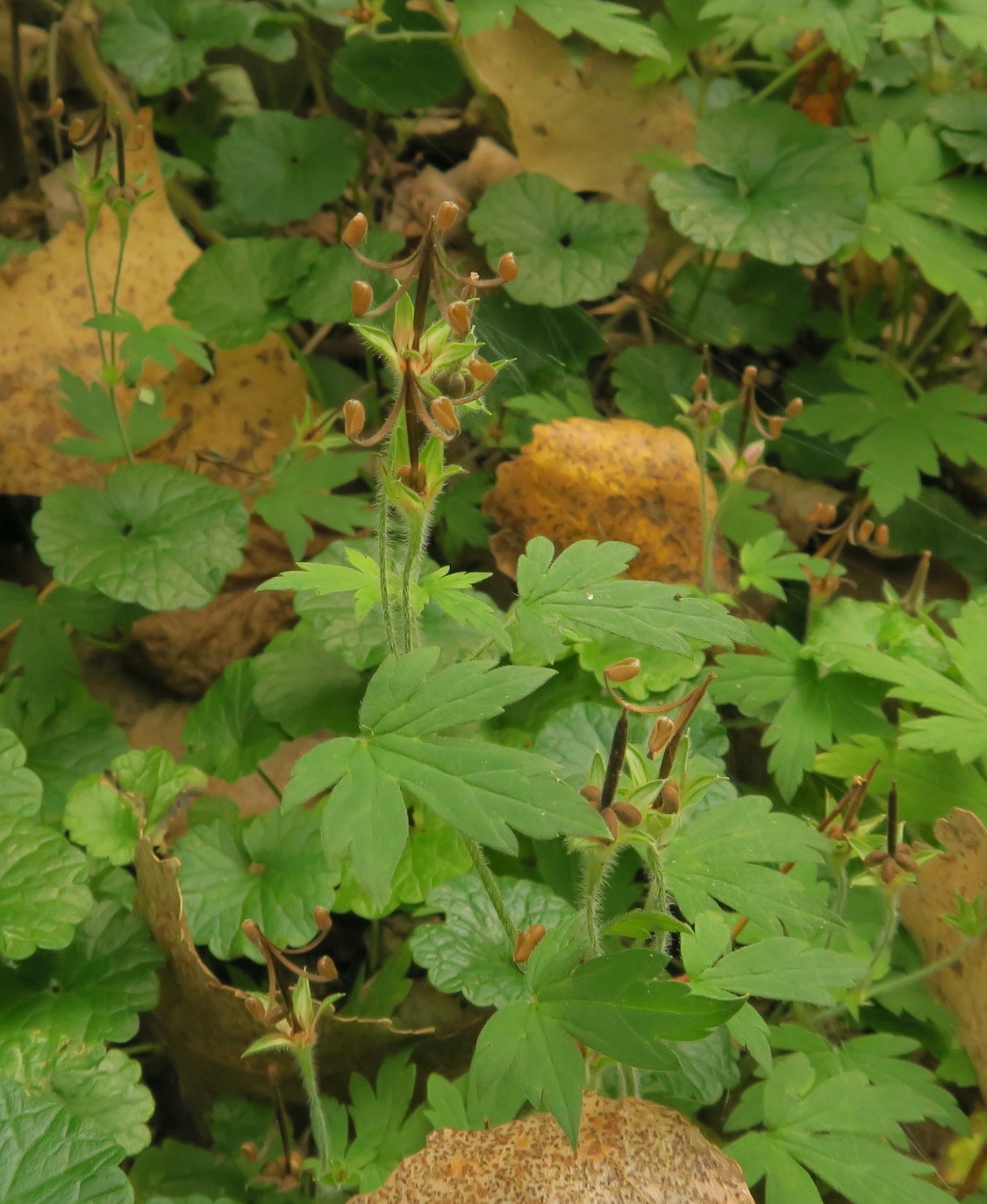 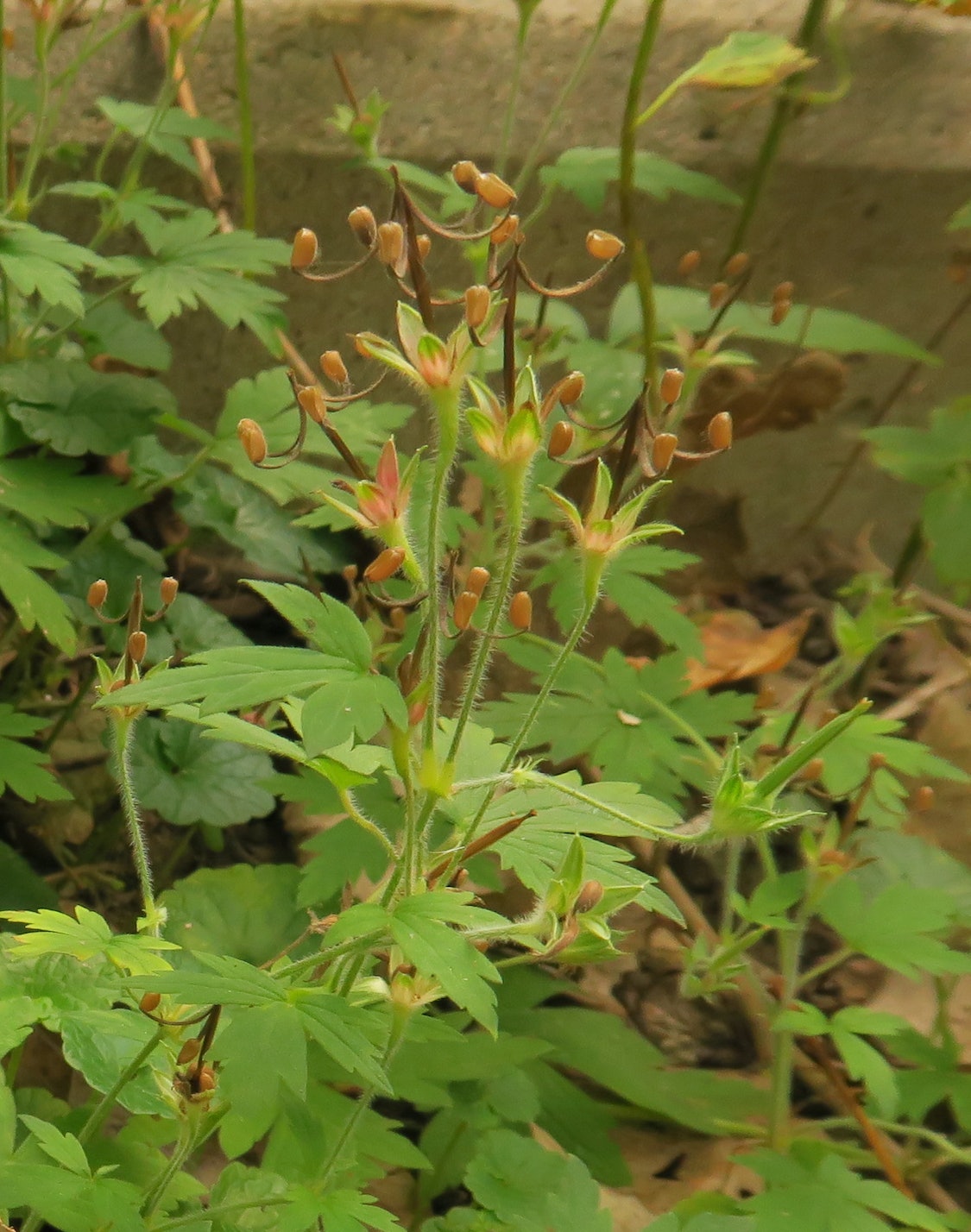