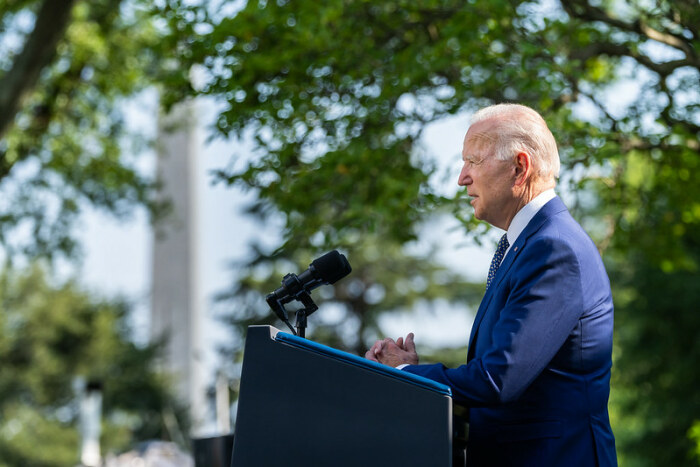 America’s best pollster has bad news for Democrats. Is she right?

The latest Iowa Poll by Selzer & Co for the Des Moines Register and Mediacom is full of bad news for Democrats. President Joe Biden’s job approval in Iowa is a measly 31 percent, with 62 percent of respondents disapproving. Governor Kim Reynolds’ job approval is 53 percent, with 43 percent disapproving. U.S. Senator Chuck Grassley leads his most likely Democratic opponent, Abby Finkenauer, by 55 percent to 37 percent.

If Selzer is right, the bad news extends far beyond Iowa. This polling suggests Democratic fortunes in 2022 look abysmal.

I have the greatest respect for Ann Selzer, and the last time I suggested she was wrong, I was wrong.

So why do I think she is wrong now?

I created this table to show how well Biden did nationally versus Iowa in 2020, and to compare the latest Selzer poll with what you would expect given Biden's national job approval and his relative performance in Iowa.

Biden did 6.4 percent worse in Iowa than he did nationally (51.3 percent of the vote versus 44.9 percent)

Currently his job approval in national polls averages 46.3 percent (per FiveThirtyEight.com). Since he performed 6.3 percent worse in Iowa than in the rest of the country, you would expect his Iowa job approval to be around 40 percent (46.3 minus 6.4 = 39.9).

But Selzer finds his job approval to be 31 percent, nearly 9 points lower than predicted.

I have maintained a database of Biden's approval in every poll released during 2021. One metric I keep track of is the president's job approval number minus his 2020 vote share in any given state (or nationally).

For example, the latest YouGov national survey (released on September 22) measured Biden's approval at 46 percent. So for that poll, the calculation would be 46 - 51.3 = -5.3.

Why does this matter?

It is clear that Biden's job approval declined in the aftermath of the Afghanistan evacuation and a sustained period of negative media coverage. The evacuation started on August 16. My database includes 70 polls released since August 20 that measured Biden's approval.

Only six of those 68 polls found a swing of more than 10 percent. Of those six polls, two were California surveys that significantly underestimated the No vote in the September 14 recall election. The other two were from Republican pollsters.

All of the above suggests that Selzer's latest Iowa poll is too pessimistic for Democrats. The question is why. 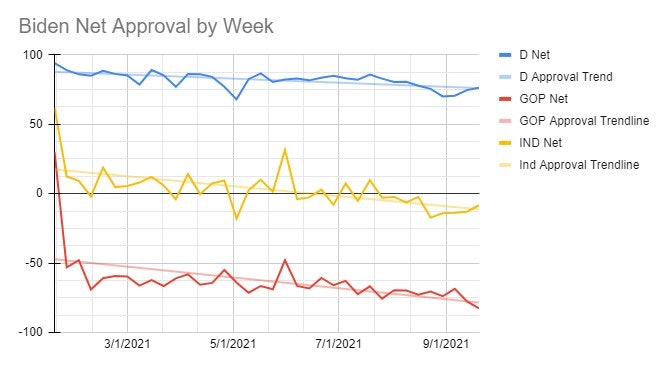 But even taking that trend into account, no other recent poll shows such low support for the president among independents as the new Iowa poll. Only 29 percent of Selzer's respondents with no party affiliation approve of Biden's job performance, while 62 percent disapprove. No other pollster is finding such large disapproval among independents.

This, then, is why I suspect the Selzer poll is out of step with the rest of the polling since August 16.

To be clear, Biden's average job approval represents a significant problem for Democrats in 2022. Indeed, it predicts the president is unpopular in Iowa and in similar places with potentially competitive U.S. Senate races, like Ohio and Wisconsin. Donald Trump's job approval was strongly correlated with the results of the 2018 Senate races.