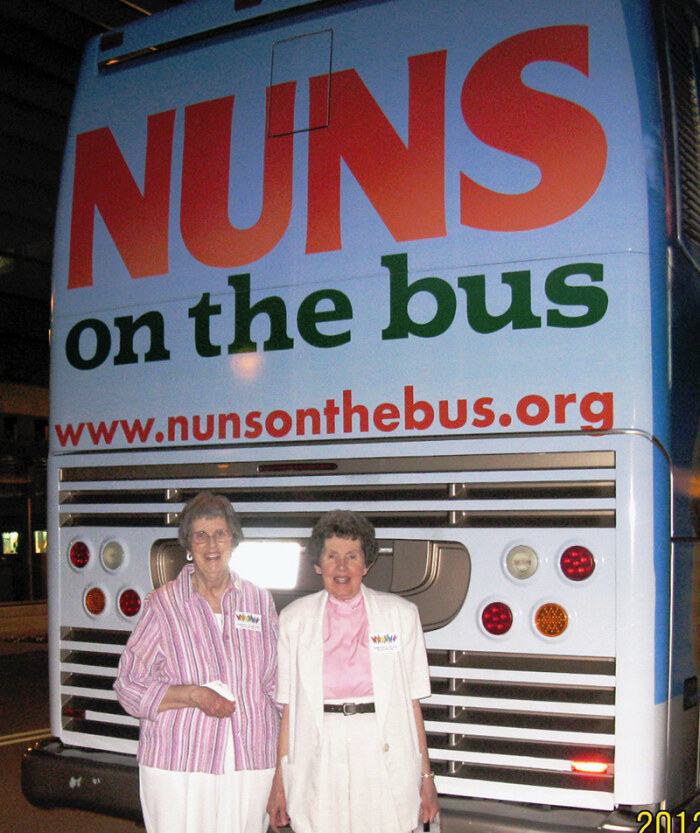 Sister Jeanie and Sister Elaine Hagedorn, who co-authored this post, are Catholic sisters with the Congregation of the Humility of Mary. They live in Des Moines and are longtime advocates for Catholic social justice with groups like NETWORK.

No matter where we come from or what we look like, Iowans believe that working families deserve a fair shot. All work has value, and all working people have rights, from farmworkers in vibrant rural towns to factory workers in our bustling cities. But for too long, a greedy few corporations and CEOs have rigged the game in Iowa and across the world, taking from working people to make sure that a powerful few can get rich off the profit that working Iowans, particularly Black and Brown working Iowans, produce.

For years, wages in Iowa have stagnated for everyone, and the racial wealth gap has exacerbated inequalities embedded in our economic system. In particular, Black, Brown, and Indigenous workers have been pushed to the economic margins by systemic inequality in our tax code. Meanwhile, the climate crisis continues to put all Iowa families at risk as storms like the 2020 derecho devastate working neighborhoods.

As Catholic nuns with decades of ministry experience in Iowa, we have worked closely with those most impacted by Iowa’s inequities. Union workers, immigrant communities, hungry children, and houseless families have turned to social services, religious communities, and mutual aid efforts because of our state and federal government’s misplaced priorities.

For too long, our governments have spent money on tax breaks for corporations and bloated military and police budgets. These reckless spending priorities promote two great social sins: inequality and violence.

Pope Francis has long spoken out about the need for governments to address the evils of inequality and violence as we recover from the COVID-19 pandemic. In place of these injustices, he has called for solidarity with workers and nonviolence to be at the center of all public policy. He has called on all people to build solutions “based on decent and dignified working conditions” so we can build an economy that puts people before corporate profits and the global weapons trade. Imagine what an Iowa that puts workers first could look like: thriving communities and strong neighborhoods where we work together for a better future.

A re-alignment of our nation’s policies with our moral priorities is long overdue, and this week, Iowa’s U.S. House representatives have an unprecedented opportunity to act. The Build Back Better Act being considered by Congress is a once-in-a-generation recovery package that can be passed through the budget reconciliation process, and Iowans need U.S. Representative Cindy Axne (IA-03) to support the full package, with all of its investments in climate, care, and community.

The Build Back Better Act would make health insurance, child care, housing, and college more affordable, and would ensure that all of Iowa’s workers have paid family and medical leave. It would expand affordable home- and community-based care for Iowa’s seniors, and it would offer tax credits for Iowa parents and workers to put food on the table. Preschool would be available to all 3- and 4-year-olds, and we would see unprecedented investments in renewable energy, offering a livable future to Iowa’s children.

This much-needed plan would be paid for by raising taxes on corporations and those earning more than $400,000 a year, and it would not raise taxes on anyone making less than $400,000 a year. This plan would be fully paid for by creating a tax code that lets us care for one another. In Iowa, we believe in rewarding work, not wealth, and we need our Congressional Representatives to reflect Iowa values.

Congress has never shied away from reckless spending to prop up forever wars and tax giveaways for the top 1 percent, but this package is paid for by ensuring that corporations and billionaires can’t continue to cheat on their taxes. The mega-wealthy who earn their income from stocks currently pay a lower tax rate than Iowa’s teachers and nurses. That can change, and it must.

So, in this busy Congressional week, we offer a prayerful challenge to our fellow Catholic Cindy Axne and all members of Congress: put people and the planet ahead of big corporate profits. Invest in solutions that serve people of color, families, and the working poor in Iowa. Pass the Build Back Better Act without delay.

Axne has already publicly endorsed the Build Back Better Act’s drug cost reforms. Now Iowans need her to hold the line, voting against the bipartisan infrastructure bill until the House passes the bold investments we deserve. If you agree, you can call Axne at 888-738-3058 and urge her to vote for a bold Build Back Better plan.