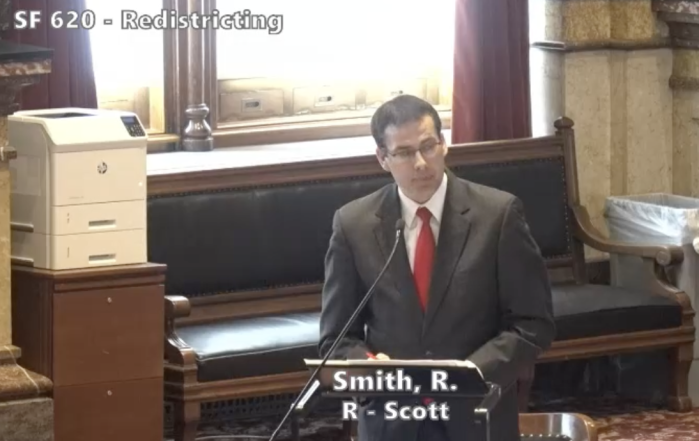 Republicans couldn't say that out loud, though, because Iowa's redistricting law states, "No district shall be drawn for the purpose of favoring a political party, incumbent legislator or member of Congress, or other person or group [...]."

So in Senate floor speeches and a resolution approved along party lines, Republicans asserted that the Legislative Services Agency could better balance compactness and population equality standards. They provided little evidence in support of those vague complaints.

You can watch the whole Senate debate here, beginning at 12:11:25. The floor manager was State Senator Roby Smith, who chairs the Iowa Senate State Government Committee. In brief opening remarks, he stated, "There are clear indications that plan 1 can be improved by a second iteration addressing compactness and population deviation."

Democratic State Senator Pam Jochum pointed out that the Legislative Services Agency's proposal conformed to all standards outlined in state law. This clip shows the entirety of Smith's closing remarks.

While Smith acknowledged the redistricting plan met Iowa's statutory requirements, he asserted "there are opportunities for these maps to be improved on compactness and population deviation." He noted that Iowa Code Chapter 42 states, "In general, reasonably compact districts are those which are square, rectangular, or hexagonal in shape, and not irregularly shaped." But "this map includes a triangle, a pyramid, a figure 8, and a district that is so irregular, it looks like the 1800s salamander known for gerrymandering." 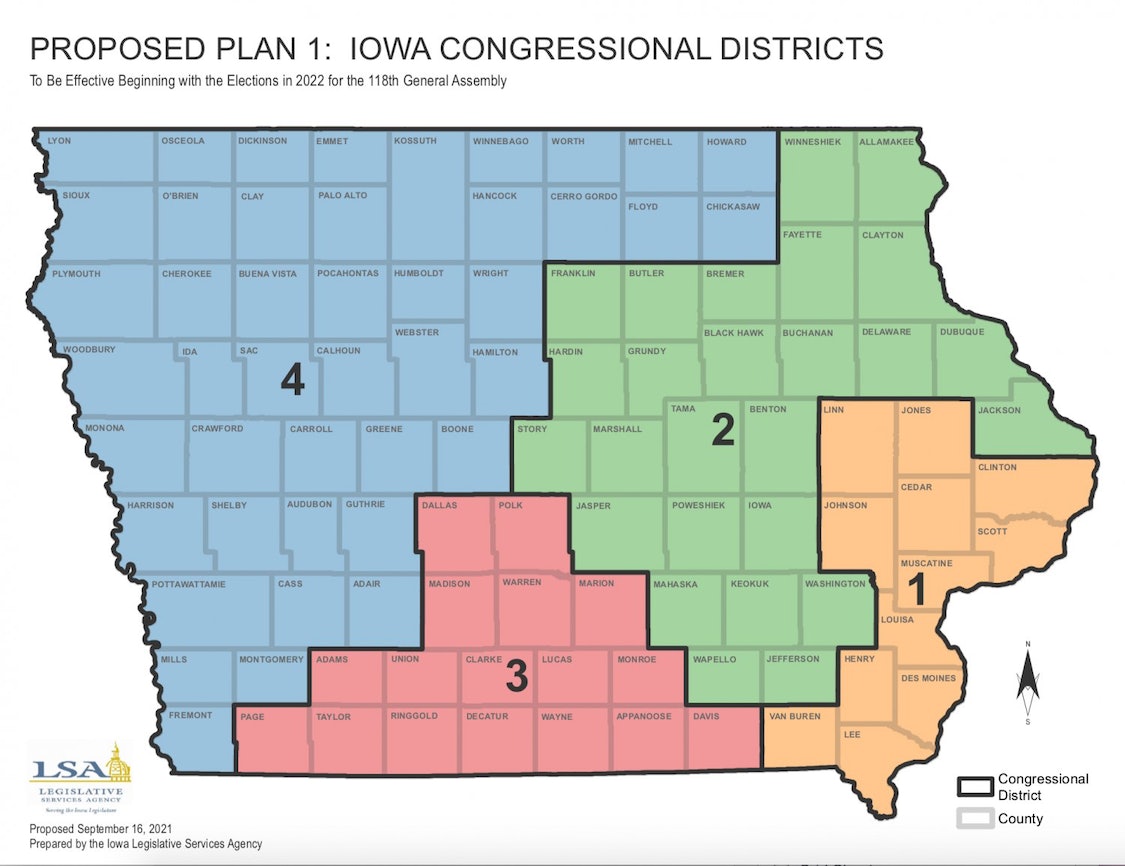 Those are no more strange-looking than the third Congressional district from the plan adopted in 1991 (in yellow on this map from Wikimedia Commons): 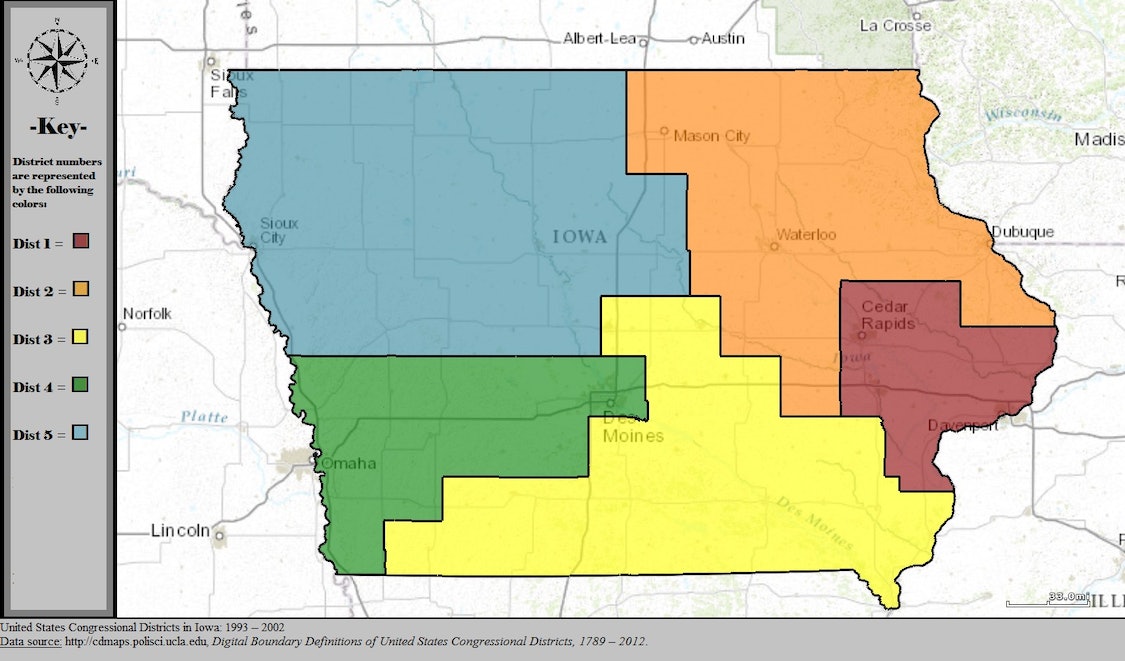 Or the fourth district from the plan adopted in 2001 (in green on this map from Wikimedia Commons): 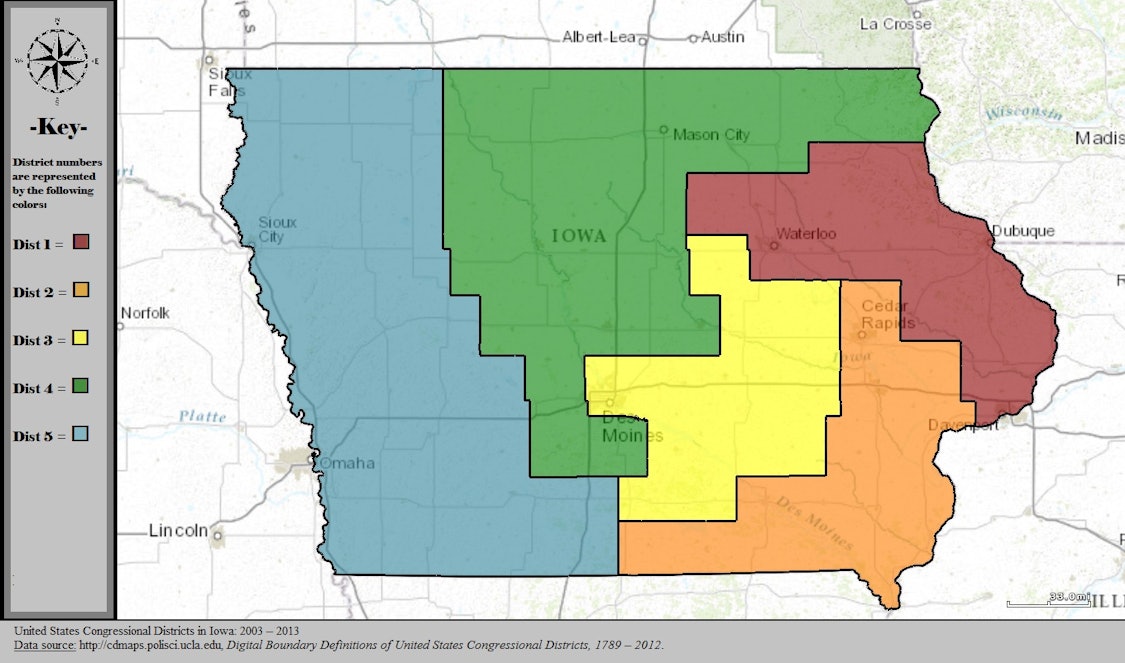 UPDATE: According to the Des Moines Register, Senate Republican staff said lawmakers had concerns about the proposed Senate districts 12 and 26. Here are the images: 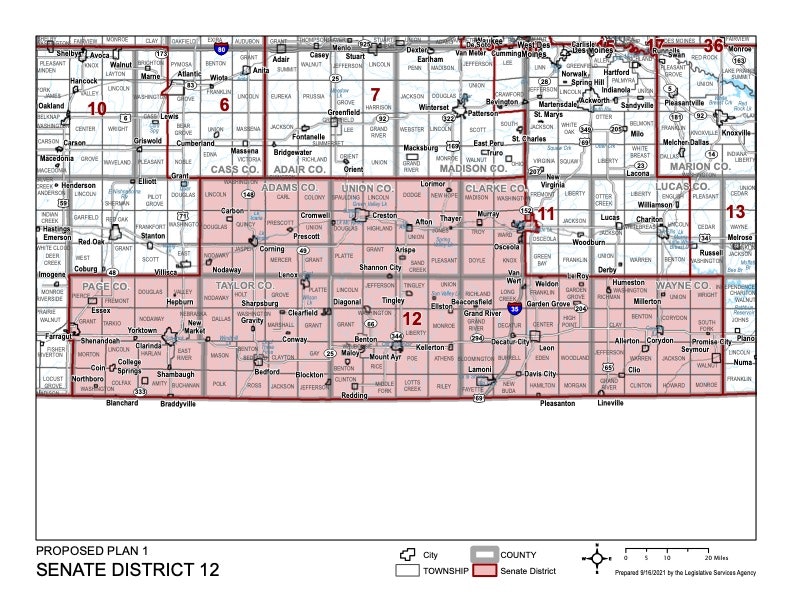 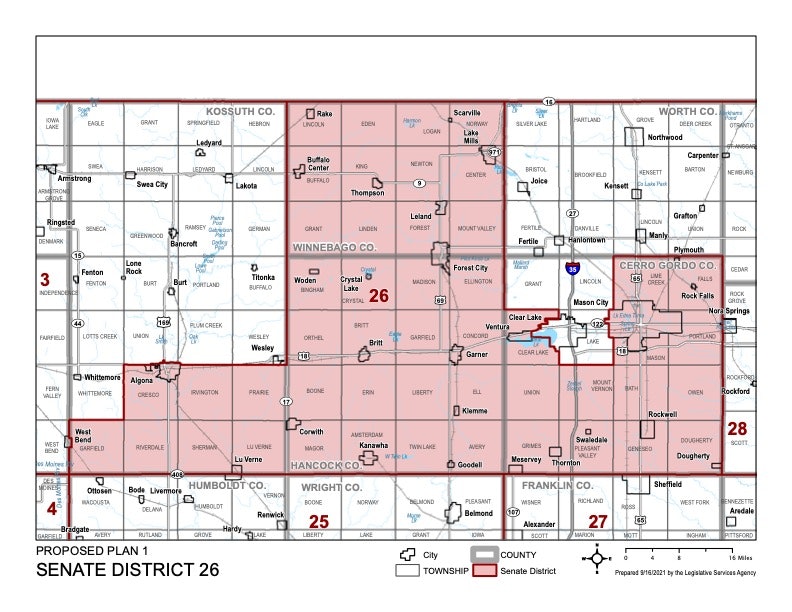 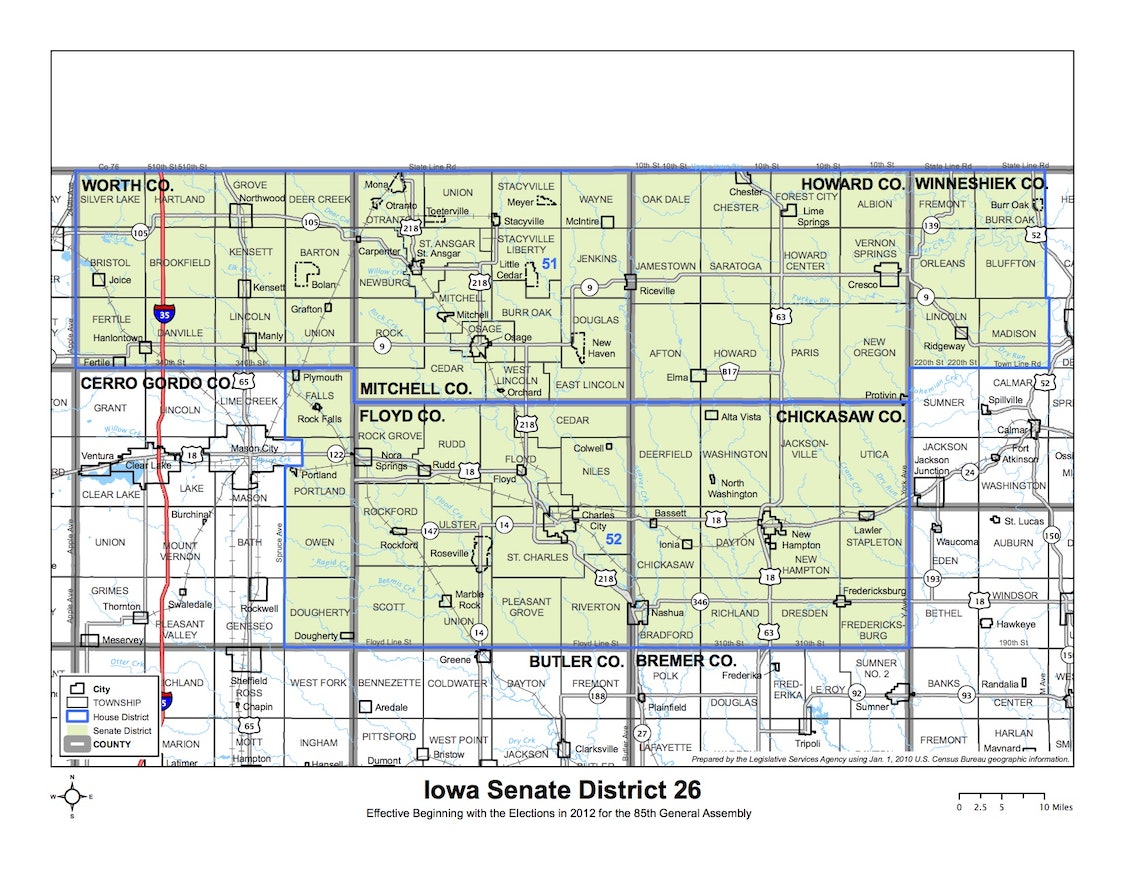 The "figure 8" district is the proposed Senate district 49. It does look odd, and according to John Deeth, would have been Iowa's first doughnut-shaped legislative district since the early 1970s. However, the district made sense in terms of communities of interest. Deeth observed that "it's easy to describe: 'All of rural Johnson, all of rural Linn.'" 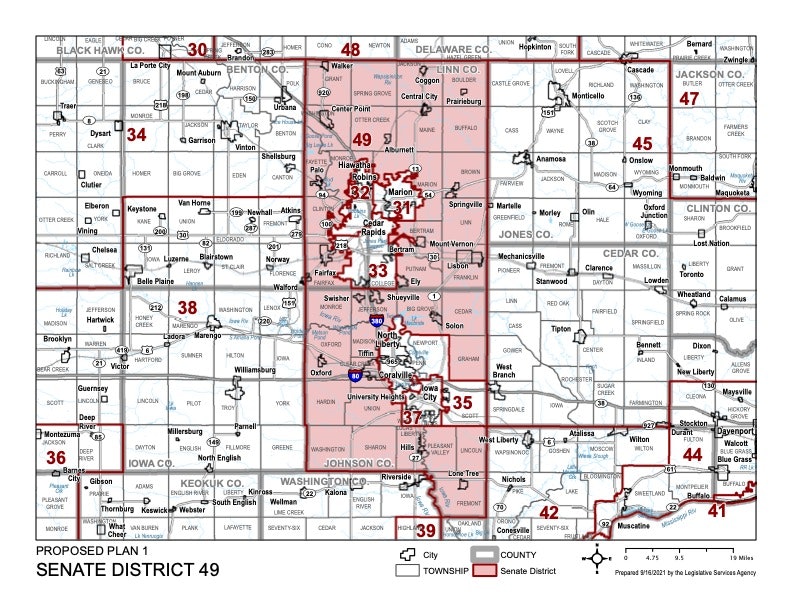 I'm not sure what Smith meant by the salamander. No Iowa House or Senate district in this plan has anything like the twists and turns of some gerrymandered districts on Pennsylvania or North Carolina maps that courts struck down in recent years.

I thought Smith might be alluding to Senate district 20, which covers parts of the northwest suburbs of Des Moines. But according to Republican State Representative Chad Ingels, the so-called salamander was House district 60, which includes part of Cedar Falls and wraps around the Waterloo metro area to include much of rural Black Hawk County.

Granted, this is not a compact district, but it doesn't scream gerrymander to me. (It's also not a great district for Democrats.) 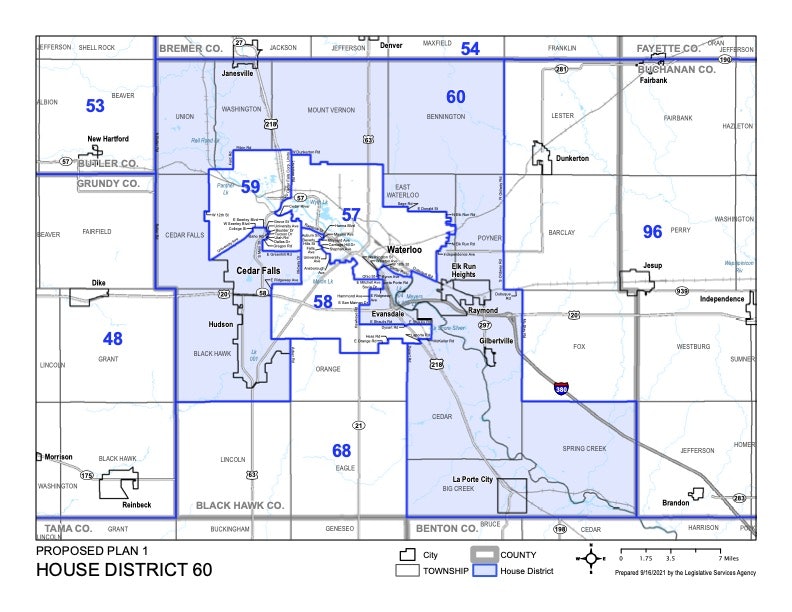 UPDATE: The Des Moines Register cited Senate Republican staff as pointing to Senate district 17 as the "salamander." That's mostly about odd city boundaries near the Des Moines metro. This district would contain a bunch of small cities and rural precincts in Polk and Dallas counties. 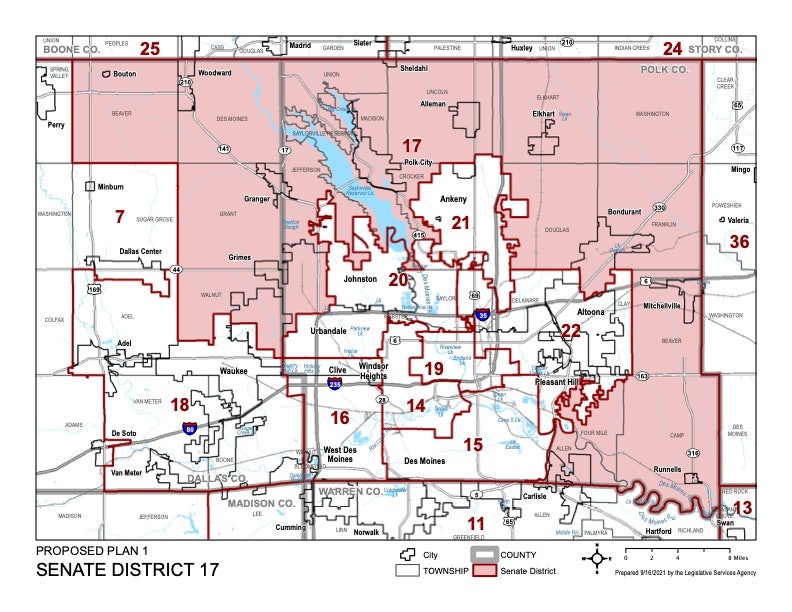 Smith went on to say that the proposed House district 18 is more than 300 miles in perimeter and "would be the seventh-largest Senate district in perimeter--as a House seat." This seat would have included all of Ida and Monona counties, most of Harrison County, and much of rural Woodbury County. It doesn't look absurd to me. Given the number of small-population rural counties in Iowa, we're going to have some large legislative districts. 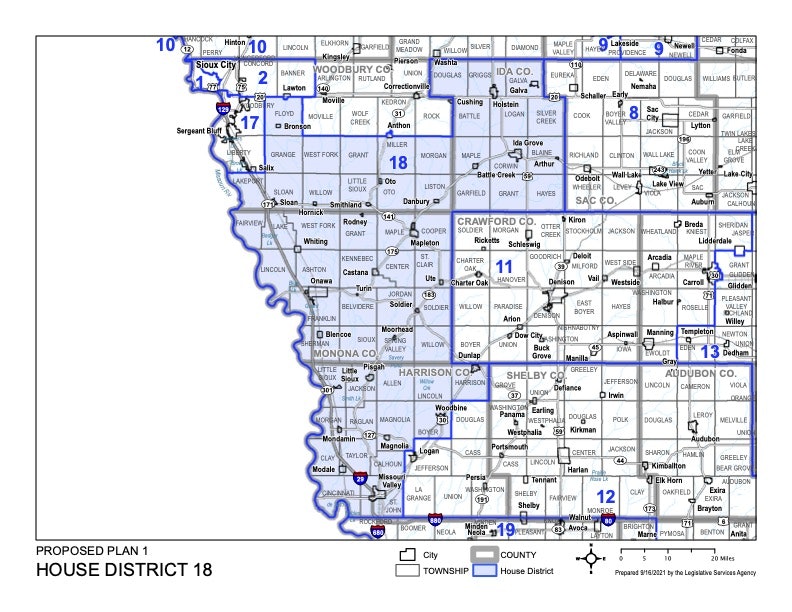 UPDATE: A reader pointed out that the proposed House district 18 is similar to the current House district 17, represented by House Majority Leader Matt Windschitl. Here's that district, part of the map adopted in 2011: 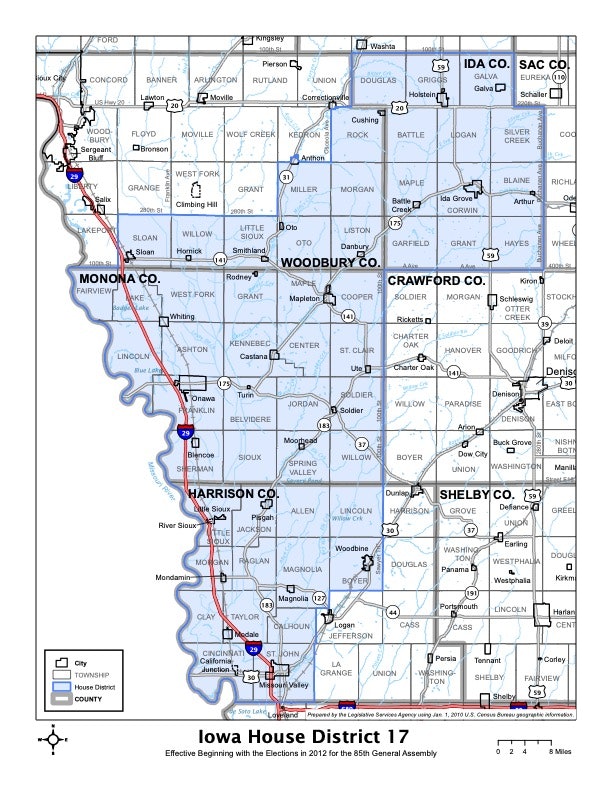 Furthermore, the proposed Senate district 9 (which would contain House district 18) is smaller in perimeter than it might have been, because the companion House district includes the south side of Sioux City, rather than one or more whole rural counties.

Smith told senators that eighteen districts would be within 100 people of exceeding the ideal population by 1 percent. One of those is close to the edge at 0.97 percent above the ideal population. (That's House district 32, covering part of the western suburbs of Des Moines.)

I asked Evan what he thought of today's Senate proceedings. He told me,

I would challenge Republicans to draw a better map -- one that is better on either measure of compactness without throwing out population equality.

And I would challenge reporters to pin Republicans down on what exactly they don’t like about the first map. Was the legislative map the problem or the congressional map? Which of the two measures of compactness do they want the LSA to improve on?

We may yet see how Republicans would draw new Iowa maps, if lawmakers vote down the second nonpartisan plan and amend the third. But whether they can execute a gerrymander depends on how long the LSA spends drafting a second set of maps. State law gives the agency up to 35 days to submit the next plan, which legislators can't vote on for at least seven days. If that fails, the LSA has up to 35 days to submit a third plan. The Iowa Supreme Court has given the legislature until December 1 to finish the redistricting process.

P.S.—The Iowa House didn't vote on the redistricting plan on October 5. House Speaker Pat Grassley took some heat from conservatives recently for not criticizing the first set of maps. In a statement reported by the Des Moines Register, Grassley commented after the Senate vote, "As I have stated previously, I believe these maps to be fair maps for Iowa. However, I don't believe the Senate’s concerns with compactness and population deviation are unwarranted."

Appendix 1: Resolution approved by Iowa Senate Republicans regarding their reasons for rejecting the redistricting plan 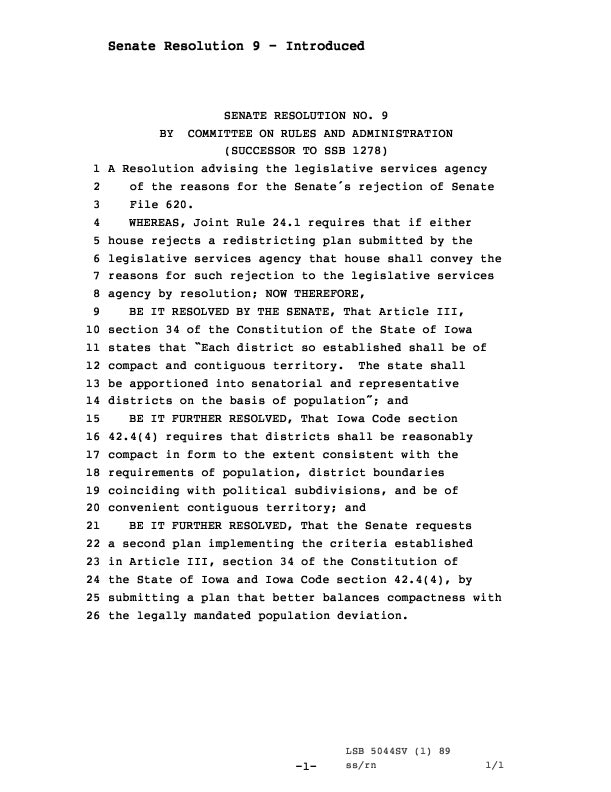 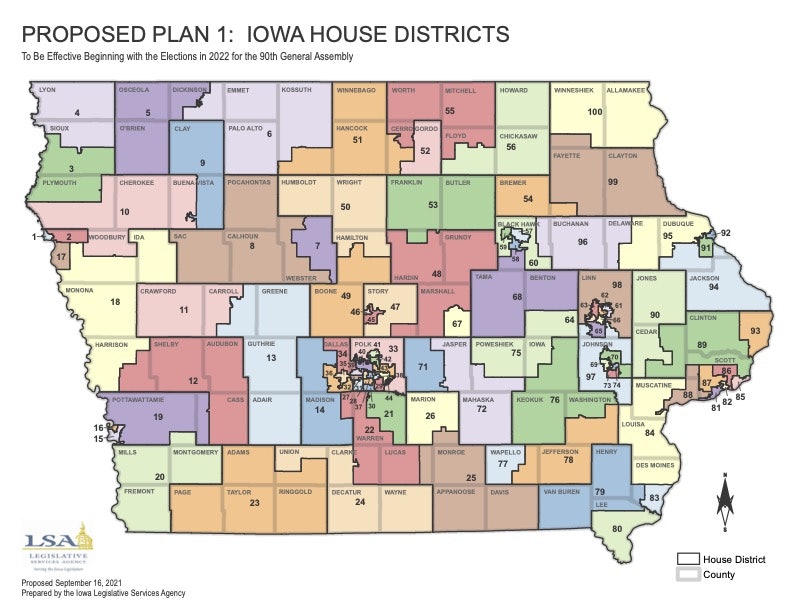 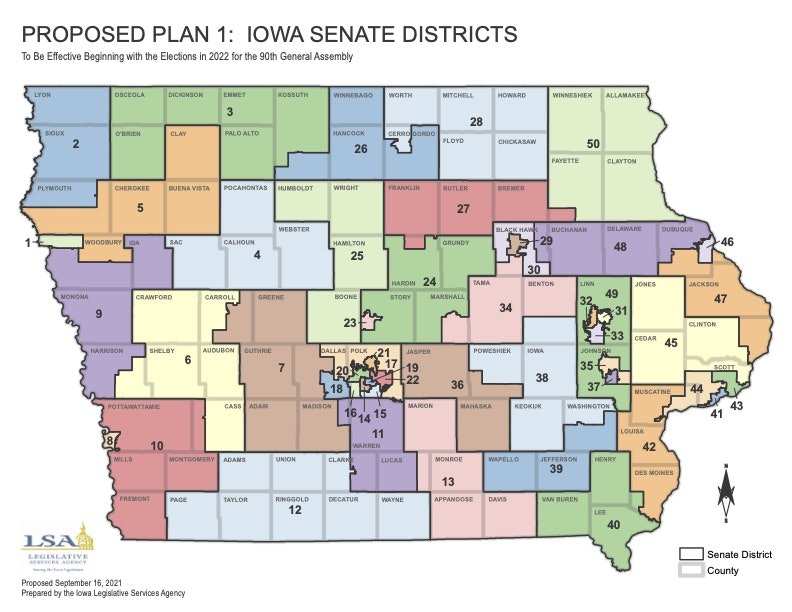