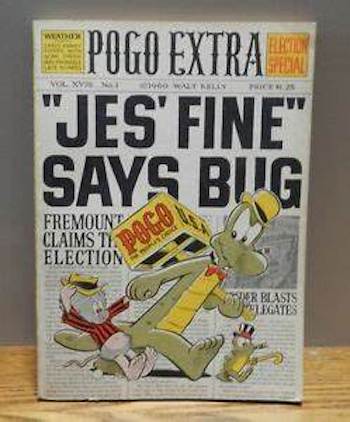 For Chuck Grassley, everything is "Jes' Fine"

Granted, “Jes’ fine” is not much of a campaign slogan. It's not as catchy as “I Like Ike,” which helped elect and re-elect President Dwight D. (Ike) Eisenhower in 1952 and 1956. Nor does it offer the hope of “Yes, We Can,” the theme of Barack Obama's 2008 presidential campaign.

But “Jes’ fine” launched a successful political career for “Fremount, The Boy Bug,” one of the Okefenokee Swamp characters in the Walt Kelly comic strip “Pogo” the possum. That was back in 1960.

Grassley is seeking his eighth term in the U.S. Senate and his nineteenth term in public office, when you add in eight terms in the Iowa House and three in the U.S. House of Representatives. Despite his longevity and ascribed Senate leadership, Grassley generally does not hold former President Donald Trump and Republicans in Congress accountable for the divisive claim of a stolen election and other political lunacy. My take is that the senator sees his duty not as repairing Trump's damage, but reassuring us things are “Jes’ fine” in Iowa.

More about “Jes’ fine,” Fremount, and Grassley in a moment. First, some context.

Few readers will recall Fremount’s celebrated time about midway in Pogo's run from 1948 to 1975. But many may have heard of Pogo’s assessment of pollution and despoilment of the environment (messes we’re still dealing with). He proclaimed from the comic strip on Earth Day in 1971, “We have met the enemy and he is us!”

That’s as relevant today as it was 50 years ago. Just as relevant are many other characters Kelly created.

For example, the family tree of today’s religious political right can be found in the sanctimonious Deacon Mushrat of the Pogo strip. The deacon’s pronouncements were always in Gothic Blackletter typeface. The Deacon founded the Jack Acid Society, a parody of the John Birch Society of the 1950s. His accomplice often was the sinister Molester Mole.

The Pogo comics had the divisive figures of Simple J. Malarkey, a parody of Senator Joe McCarthy of the 1950s, and the hate-filled Wiley Catt. They can be viewed as precursors of today's conservative bomb-throwers, U.S. Representatives Marjorie Taylor Greene and Matt Gaetz.

So it's fitting for Grassley to take a page from the playbook of “Fremount, The Boy Bug.” The Boy Bug’s campaign manager was a flim-flam political operative, the bear P.T. Bridgeport. He knew that “Jes’ fine” was all Fremount could say, and all he needed to say to get votes. A YouTube video gives credit to Mushrat and Mole, too, for recognizing how Fremount’s “Jes’ fine” would appeal to voters.

While he’s not on record as literally saying “Jes’ Fine,” that phrase captures how Grassley tolerates Trump's ongoing ravings about the 2020 election. Laura Belin reported recently on the senator's attempt to spin the evidence about the president's efforts to pressure the Justice Department, and on Grassley's five-year pattern of covering for Trump's abuses of power.

At Trump's Iowa rally last weekend, Grassley was unperturbed as Trump again sounded the insurrection trumpet, figuratively speaking, and urged citizens to throw the rascals out because Democrats stole the presidential election.

Indeed, in comments to reporters on October 14, Grassley tacitly endorsed Trump’s lies with this absurd assessment: “He is a private citizen. He can say whatever he wants. I am watching the 2022 election and presenting my case to the people.”

In that focus on his re-election, the senator welcomed Trump’s endorsement in Des Moines. He was not mindful of the op-ed he wrote for the Quad-City Times and Waterloo/Cedar Falls Courier in January. In that commentary, published on Joe Biden’s inauguration day, Grassley wrote:

[W]e can’t ignore the facts. Every state, every lawsuit and every investigation have delivered the same outcome: Joe Biden will be America’s next president. It is wrong for anyone in a position of public trust to mislead the public about the results of the presidential election, which despite some minor irregularities that we should investigate and address, produced a conclusive result.

In remarks on the Senate floor in May, Grassley again sought to reassure us: "America’s elections are free and fair. That’s true in Iowa, in Georgia, and all 50 states. It was true in 2018 and in 2020, and I am confident it will be true in 2022."

In that speech, he asserted that both political parties were raising election issues for partisan reasons: “Casting doubt on elections may be fine politics in the short run, but it does real damage in the long run.”

To say we face “real damage in the long run” is an understatement of the threats Trump and his supporters pose to our self-government. Citizens and public officials need to do more than conduct annual tours of their states with “Jes’ fine” messages.

Op-eds published in the New York Times and the Washington Post on October 11 drove home that point again. Here’s how the thoughtful blogger Heather Cox Richardson took note of our crisis:

Both the New York Times and the Washington Post today ran op-eds from Republicans or former Republicans urging members of their party who still value democracy to vote Democratic until the authoritarian faction that has taken over their party is bled out of it.

In the New York Times, Miles Taylor and Christine Todd Whitman wrote, “We are Republicans. There’s only one way to save our party from pro-Trump extremists.” Taylor served in the Department of Homeland Security and was the author of the 2018 New York Times piece by “Anonymous” criticizing former president Trump. Whitman was governor of New Jersey from 1994 to 2001, after which she headed the Environmental Protection Agency under President George W. Bush. [...]

Taylor and Whitman note that “rational Republicans” had hoped after Trump’s defeat that they might take back the party, but it is clear now, they write, that they are losing the party’s “civil war.”

Nothing “Jes’ fine” about that.