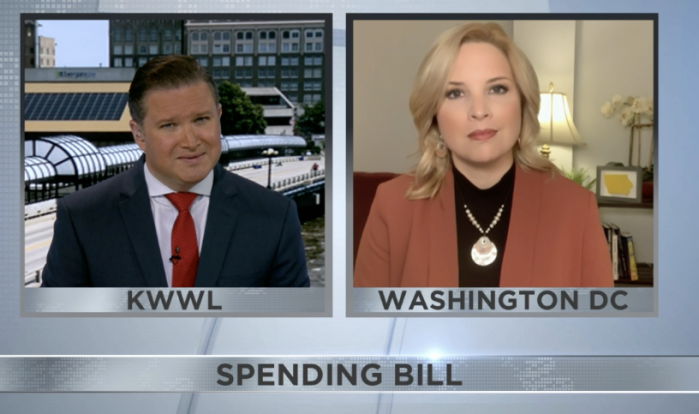 U.S. Representative Ashley Hinson gives a lot of television interviews. The first-term Republican is comfortable on the air, thanks to her broadcast journalism background. She is guaranteed friendly treatment from conservative networks like Fox News and Newsmax, and Iowa stations usually let her set the agenda with questions like, "What are you most proud of?" or, "You introduced a bill in the House. Just tell me more about that bill and what it does."

Waterloo-based KWWL is the NBC affiliate in the Cedar Rapids market and reaches most of the counties in Hinson's current district, as well as fourteen of the 22 counties in the new second district, where the first-term Republican will seek re-election next year.

The station's morning news show aired its latest interview with Hinson on November 3. The four-minute segment focused entirely on issues the politician has highlighted recently through news releases and her social media feeds.

Winn began with a question about "the president's social spending bill," framed in a helpful way for Hinson. The politician spent about 45 seconds talking about "rampant inflation," "the Democrats' incessant spending," and what Congress should be doing instead.

Winn: Yeah, you mentioned the border right there, I do want to talk about that as well. So, I—I don't know where to go with this. There have been reports that the White House (chuckles) wants to give 450 thousand dollars to illegal immigrants who were separated at the border.

To you I ask, is this real? Because this seems pretty crazy.

Hinson: Yeah. It's really an America last proposal. And spending $450,000 on people who came here—breaking the law as their first act, I might add—what a slap in the face to the people who have waited in line to come into this country the right way.

Hinson has been eager to tell the world about this so-called "America last proposal." On her social media and in an op-ed column, she has wrongly implied that every immigrant "who broke our laws" is going to get $450,000 from the federal government.

The alleged payments (President Biden has said they are not happening) were only floated for families that had children separated from their parents for months or years. Many of those families were seeking asylum in the U.S., which is not illegal. At least 1,000 children "still haven't been reunited with their parents," due to poor record-keeping under the Trump administration.

If Winn had done his homework, he would have known that possible settlements of $450,000 per individual or $1 million for a family could be less costly for the federal government than letting trials play out. Juries might award some families millions of dollars, recognizing that family separation inflicted long-lasting trauma on those affected, some of whom had legitimate asylum claims.

An American Academy of Pediatrics report published this year said the Trump administration "policy met the criteria for torture because it inflicted physical and psychological abuse on children, causing them painful, severe suffering and represented 'a purposeful' government strategy designed to use children to reduce border crossings."

But Winn didn't do his homework. He didn't challenge Hinson's false claim that these negotiations to settle lawsuits are the Biden administration's "only policy proposal" to address border issues, for instance. And after Hinson finished what she wanted to say about immigration matters, Winn responded, "450 grand, seems like a crazy amount of money there."

He then pivoted to supply chain issues, another topic the member of Congress is happy to blame on the Biden administration. Winn closed out the segment by seeming to agree with Hinson's assessment.

KWWL might as well have had Hinson's press secretary conduct the interview.

I'm transparent about my political views and don't conceal my opinions about issues covered here. In contrast, local television stations purport to be neutral about partisan politics. Their reporters and anchors are not supposed to editorialize during newscasts, unless part of their job involves delivering commentaries.

Winn didn't respond to my email about this segment. Among other things, I wondered, is this a typical thing for him to say when interviewing newsmakers? Has he ever framed a Republican policy as "crazy" on the air? Does he feel that's good journalistic practice?

Political bias aside, advocates for people with disabilities discourage the use of terms of abuse like "insane," "crazy," or "dumb" in daily life, because those words reinforce harmful stereotypes, even if that wasn't intended.

I've been striving to remove stigmatizing vocabulary from my own writing and not to call a misguided plan or outlandish statement "insane," even in casual conversation. Whether they are discussing politics or any other topics, KWWL's reporters should avoid ableist language.