With the state's Comprehensive Annual Financial Report and Single Audit for the 2020 fiscal year in the rear view mirror, the State Auditor's office has been churning out its annual "reports of recommendations" for state government agencies and other entities. The majority of reports issued so far have cited no concerns related to internal control or compliance with statutory requirements.

However, the latest report for the Iowa Department of Agriculture and Land Stewardship (IDALS), published on November 23, pointed to several practices "for which we believe corrective action is necessary."

A news release noted that State Auditor Rob Sand "recommended the Department strengthen internal controls over receipts in certain Bureaus," adding, "The finding discussed above is repeated from the prior year."

That's an understatement. Sand and the previous two state auditors have been warning IDALS about the same internal control problems for more than ten years.

Two routine IDALS practices continue to concern the auditors: insufficient segregation of duties, and inadequate review of some accounts and transactions.

The latest report explains, "A good system of internal control provides for adequate segregation of duties so the authorization, custody and recording of transactions are not under the control of the same employee. This segregation of duties helps to prevent losses from employee error or dishonesty." State reports of recommendations on IDALS have included similar language since 2010.

In the Commercial Feed and Fertilizer Bureau and the Animal Industry Bureau, one person is responsible for opening mail, recording receipts in the Bureau’s database, preparing the deposit and taking the deposit to Accounting. [...]

In the Weights and Measures Bureau, one person is responsible for opening mail, recording receipts in the Bureau’s database, preparing the deposit and taking the deposit to Accounting. The person who collects the fees is also responsible for mailing renewal notices for licenses, updating the outstanding license listing and mailing past due notices. [...]

IDALS also doesn't have systems in place to ensure certain bureaus are collecting and depositing the right amounts.

The Commercial Feed and Fertilizer Bureau does not prepare a reconciliation of Bureau records to determine whether the appropriate fees were received and deposited. [...]

The [Weights and Measures] Bureau does not perform a reconciliation of licenses issued to fees collected. [...]

None of this should be news to Iowa Secretary of Agriculture Mike Naig, because state auditors have been flagging the same issues since he became deputy secretary of agriculture in 2013. Annual reports of recommendations repeated the advice after Naig rose to his current position in 2018.

The initial listing of receipts should be compared to the deposits by an independent person. In addition, the Bureaus should reconcile collections per the Accounting Bureau to licenses issued to determine whether the appropriate fees were received and deposited. Also, data entered in the databases should be reviewed to ensure accuracy. The Pesticide Bureau should consider verifying gross retail sales information, at least on a test basis, for dealer license renewals and product registration renewals.

The Department continues to make significant investments to better segregate duties. Within the past year, the Department developed and implemented an e-payment option in the Entomology Bureau for Hemp fee collection. This is in addition to e-payment systems that have been implemented in the two bureaus that have the highest volume of incoming checks, the Pesticide Bureau and Feed and Fertilizer Bureau. This will help reduce the number of checks received by those Bureaus and free up staff time to allow for additional segregation of duties. This is a more efficient method and allows for better controls than the previous process. We plan to implement an e-payment option for our Animal Industry Bureau and continue to evaluate other Bureaus that may be able to transition to an e-payment option.

The official IDALS response to state auditors repeated that language and touted a few other new procedures, like having more reconciliations of collections, deposits, licenses, and fees. It also rehashed excuses used in the past about lacking enough staff to fully segregate duties.

When Bleeding Heartland covered this story in 2019, public finance consultant Randy Bauer commented that many government bodies face similar challenges. He suggested that a "shared services" model for accounting across state government could address the problems. Another option would be for IDALS bureaus to "swap" accounting duties so that staff in one unit either prepare deposits or reconcile for another unit.

It's hard to understand why Naig doesn't make that happen. Republicans often claim to believe in running government like a business. What business with nearly 350 employees would operate with substandard accounting procedures year after year?

As state auditors noted in the latest report, "Management of the Iowa Department of Agriculture has a fiduciary responsibility to provide oversight of the Department’s operations and financial transactions."

Appendix: Relevant portion of the State Auditor's Report of Recommendations to the Iowa Department of Agriculture and Land Stewardship for the 2020 fiscal year 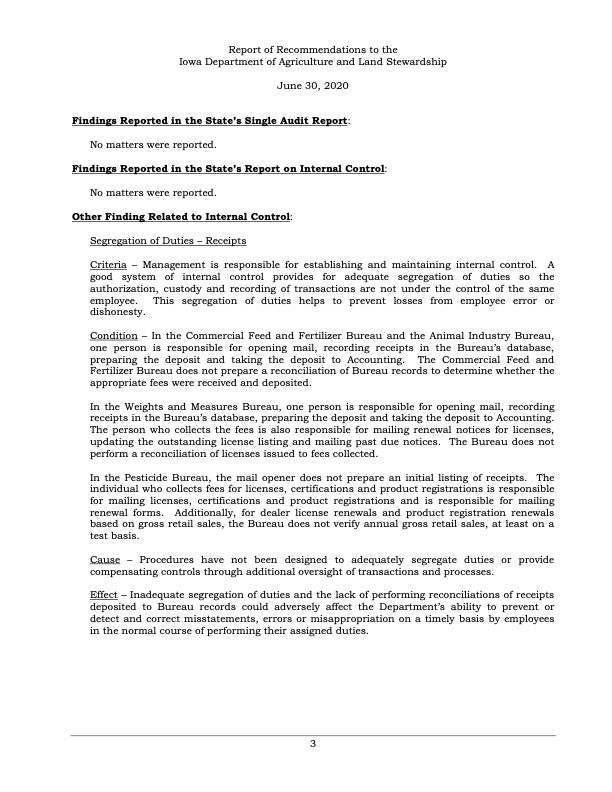 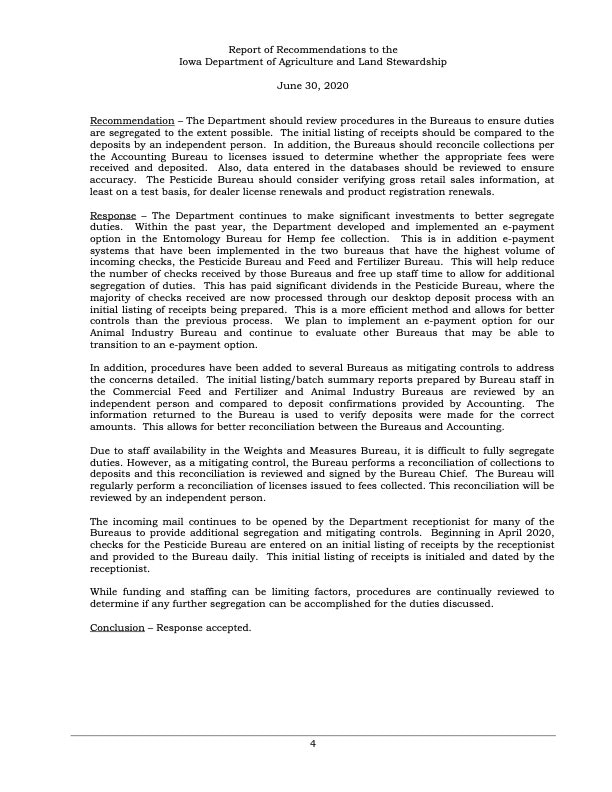