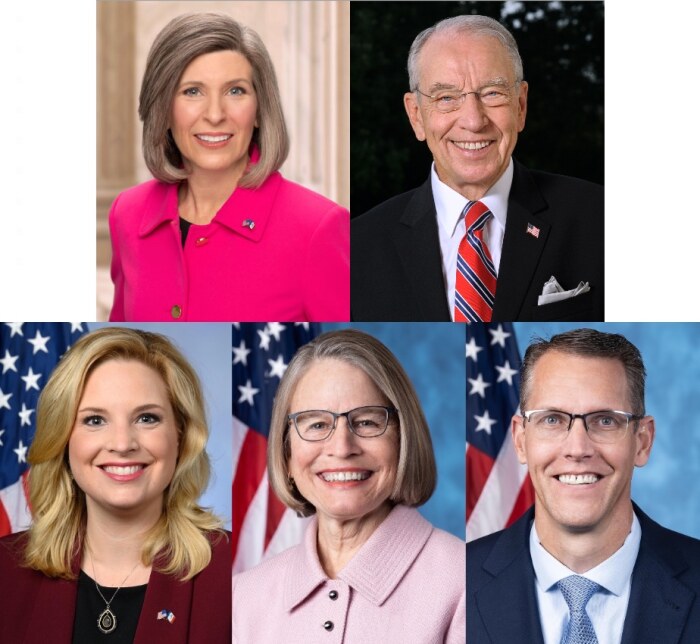 Iowa Republicans say little about voting to shut down government

The federal government will stay open until at least February 18, after the U.S. House and Senate passed a continuing funding resolution on December 2. Only one House Republican crossed party lines to support the resolution, which mostly maintains spending levels agreed during the Trump administration. Iowa's Representatives Ashley Hinson (IA-01), Mariannette Miller-Meeks (IA-02), and Randy Feenstra (IA-04) opposed the bill.

In the upper chamber, nineteen GOP senators joined Democrats to send the legislation to President Joe Biden. Notably, Iowa Senators Chuck Grassley and Joni Ernst voted against the bill, even though they had supported resolutions setting federal spending at these levels while Donald Trump was president.

The most significant change in the continuing resolution was an extra $7 billion in appropriations related to Afghanistan. Emily Cochrane reported for the New York Times,

All of Iowa's Republican members of Congress have expressed support for helping those who assisted the U.S. military campaign in Afghanistan. Yet they all voted against this spending. Why?

Grassley told Iowa reporters on December 1 that he didn't support shutting down the government in order to block one of Biden's COVID-19 vaccine mandates. But his office didn't release any statement about the continuing resolution, nor did he mention the funding bill on his Twitter feed. (He did tweet about opposing vaccine mandates.)

Ernst also didn't mention her vote against keeping the government running in any news release or on her social media feeds. The same was true for Feenstra and Miller-Meeks.

Hinson was the only Iowa Republican to release a statement on the matter.

“Iowans are sick of Speaker Pelosi's out of touch policy pipedreams taking priority over the real issues that impact real people. Congress has known about this deadline for months, but Speaker Pelosi shut down government funding negotiations to focus on passing the reckless $1.7 trillion reconciliation bill. We need to do our job and fund the government in a way that respects working families who pay taxes. Iowans sent me to Washington to stop the chaos and dysfunction in Congress, not enable it further."

Those comments don't make a lot of sense, because:

But I will say this for Hinson: she made some effort to explain her position on an important Congressional vote. Miller-Meeks, Feenstra, Ernst, and Grassley couldn't be bothered.