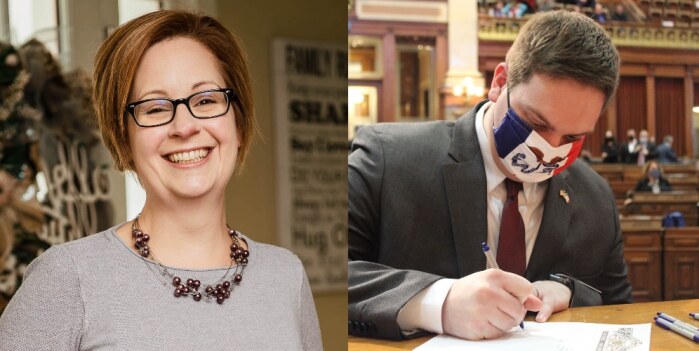 A rematch is coming in one of the last cycle's closest Iowa House races.

Heather Matson announced on December 17 that she will run in the new House district 42, covering part of Ankeny. The Democrat represented the current House district 38 for two years before losing to GOP challenger Garrett Gobble in 2020.

While Gobble has not formally launched his re-election campaign, he posted on Facebook in October, "I look forward to getting to know the constituents of my new district!"

Both parties will likely spend heavily on this race.

House district 42 includes the Des Moines Area Community College Campus and several other neighborhoods in the booming suburb to the north of the capital city. 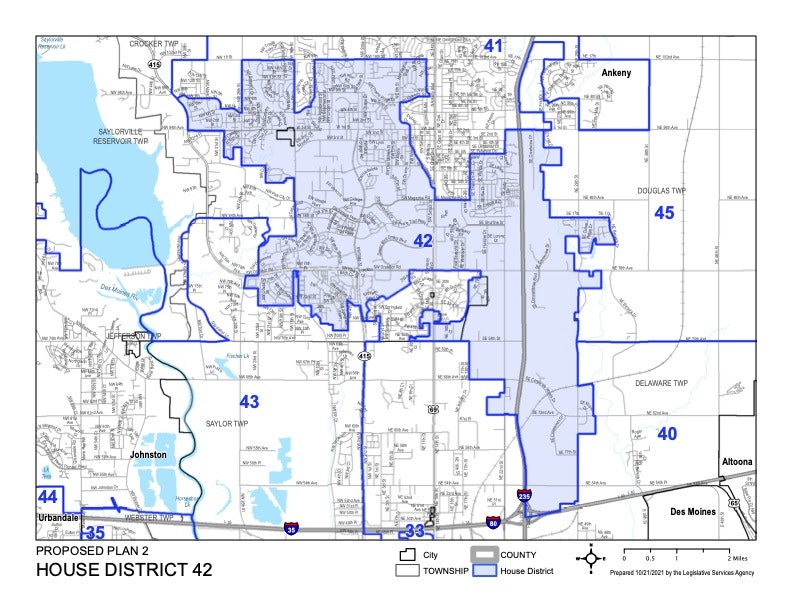 I don't have voter registration totals for the new state legislative districts, but this looks like a classic example of a suburban swing district. According to a map Josh Hughes created on Dave's Redistricting App, voters living in the new House district 42 preferred Donald Trump to Hillary Clinton in 2016 by 48.0 percent to 42.6 percent. Two years later, Democrat Fred Hubbell slightly outpolled Governor Kim Reynolds by 50.0 percent to 48.1 percent. And in 2020, Joe Biden edged out Trump by 49.1 percent to 48.5 percent, but Republican Senator Joni Ernst carried the same area by 49.3 percent to 48.0 percent.

Note that the new district lies wholly within the Ankeny city limits. In contrast, the district Gobble now represents included parts of Ankeny but also Crocker, Saylor, and Delaware townships, and even some streets in the city of Des Moines. 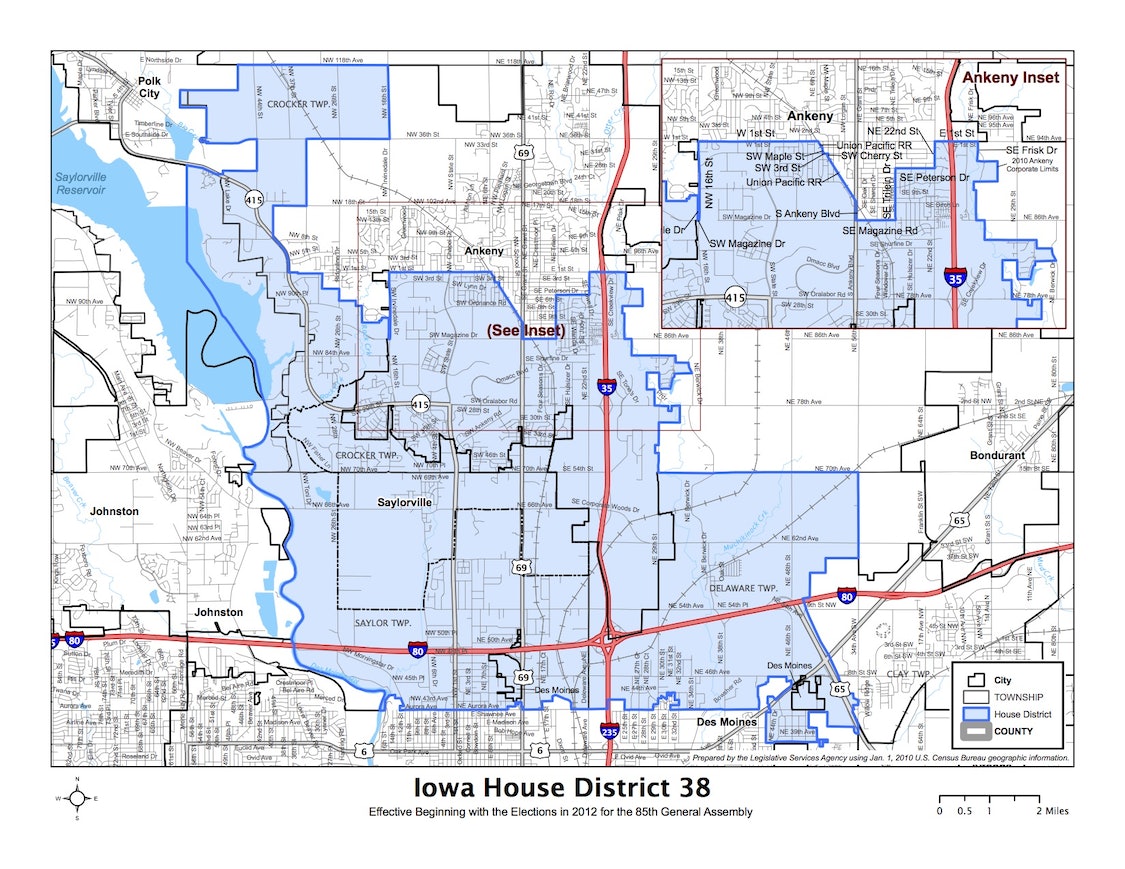 The Daily Kos Election team's indispensable spreadsheet of results by state legislative district shows that this area tilts slightly more to the GOP than the terrain where Matson and Gobble will face off next year. In the current House district 38, Trump outpolled Clinton by 49.8 percent to 42.9 percent in 2016 and gained 50.2 percent of the vote in 2020, to 47.8 percent for Biden.

Trump almost certainly pulled Gobble over the line. He defeated Matson by 10,084 votes to 9,927 (50.3 percent to 49.5 percent), a result not anticipated by insiders in either party. Gobble and Eddie Andrews were the winning state House candidates one GOP operative had in mind when he told the Des Moines Register right after the election,

He wasn't the only one. Matson wasn't seen as one of the most vulnerable Iowa House Democrats in 2020. Gobble, a young teacher in the Ankeny school district, was viewed as a weak recruit. He raised little money for his campaign. The GOP spent less than $30,000 on Gobble's behalf, and Democrats spent only about $62,000 defending the seat. Neither party aired television commercials on behalf of their candidate.

In contrast, each party spent more than $300,000 in House district 38 in 2018, when Matson challenged GOP incumbent Kevin Koester for a second time. The combined Democratic and Republican spending on that race exceeded $700,000.

Given how much Republicans and Democrats spent before the recent special election in an Ankeny-based House district, next year's race in House district 42 should be a top target.

Some factors favor the GOP; several recent midterm elections were waves for the party out of power in Washington. On the other hand, the suburbs have changed markedly in the past decade, and the new lines are a bit better for Democrats.

In addition, Gobble hasn't differentiated himself from his party's leadership in any way, making it difficult for him to campaign as a moderate. He may cast more extreme votes during the 2022 legislative session. For instance, a near-total abortion ban would probably not be a winning issue in a suburban district.

Final note: The redistricting plan put newly-elected GOP State Representative Mike Bousselot in House district 42 as well, but Bousselot announced early this month that he will run for Iowa Senate district 21 next year instead. That seat is open because Senate Majority Leader Jack Whitver is fleeing from Ankeny to safer Republican territory.

Community leader will bring experience of building trusted partnerships with constituents back to the Capitol.

Ankeny, IA | December 17, 2021 - Former State Representative Heather Matson of Ankeny announced today that she will run for the Iowa House of Representatives in the new House District 42. Matson previously represented Ankeny in the State House from 2019-2021.

“My commitment to the people in my community has not wavered,” said Matson. “People across the political spectrum feel like they aren’t being heard and they deserve a representative who is committed to building trust and has a proven track record as their partner.”

Matson has spent the last 23 years working and volunteering as a public policy advocate, community leader, state legislator, and development professional. Currently, she is a founding partner of a new 501c3, nonpartisan, non-profit organization created to provide formative civic education to adults paired with organizing and coaching for sustained civic engagement and communal problem solving.

“I’m running because I am passionate about fairness and solving real problems. Now more than ever, Iowans deserve an honest conversation about the challenges and opportunities we face as a state,” said Matson. “The last two years have exposed the cracks in the system that current leadership is choosing to either play politics with, or simply ignore. I am running to invest in Iowans and bring a balanced approach back to solving our most difficult policy and budgetary challenges.”

Matson, 45, is married to Dr. Chris Matson, a family practice physician at Broadlawns Medical Center. She is a proud mom of twins who are in 6th grade in the Ankeny Community School District. Matson is an active member of her community where she serves on the board of directors of the Ankeny Service Center and the Ankeny Kiwanis Club.