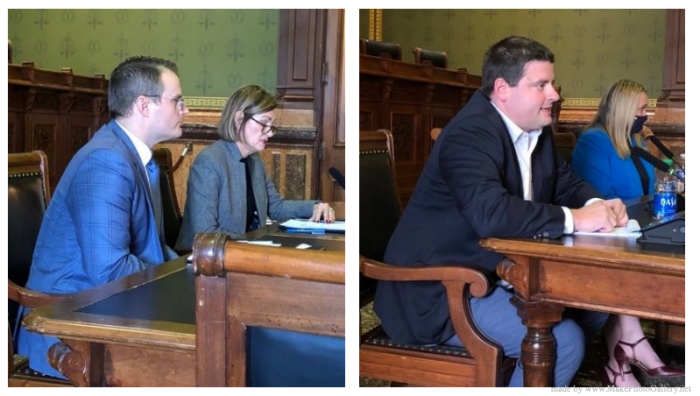 Iowa's COVID-19 cases are exploding, and leaders of major hospital systems and clinics are pleading with the public to get vaccinated and take other precautions, including "masking up—even if you're vaccinated."

Meanwhile, Governor Kim Reynolds and top Republican lawmakers prioritize the concerns of those who refuse to do the bare minimum to combat the state's third leading cause of death over the past two years.

During a January 4 forum organized by the Iowa Capitol Press Association, Reynolds again touted legislation passed in October opposing vaccine mandates. Speaking about health care workers specifically, "these are individuals that have been on the front lines since day one. And to now go in and tell them, if they're going to be in a health care setting, that they have to get a vaccine or lose their job, I think is wrong."

Overcrowded hospitals and dozens of nursing homes outbreaks matter less to the governor than standing up for Iowans who won't get a free, effective, safe vaccine. As Kathie Obradovich commented last month,

What about Iowans’ right to seek medical care or live in a nursing home without having to risk catching COVID-19 from an unvaccinated staff person? Guess what, you have no such right. Staff at state-run care facilities have been notoriously lagging at getting vaccinated. […]

Reynolds could stand up for Iowans’ right to choose whether to be vaccinated while making it clear that skipping the vaccine is the wrong choice. It’s a choice that has prolonged the pandemic at the cost of thousands of Iowans’ lives and economic upheaval. It’s a choice that has provided a wealth of opportunities for COVID-19 to mutate, endangering everyone. But she’s instead continued to appease the misinformed and politically active ranks of the anti-vaxxers. It’s a choice that puts every Iowan in jeopardy.

Reynolds did tell reporters at the forum that before approving more restrictions on employer vaccine mandates, Iowa lawmakers should wait to see how the U.S. Supreme Court rules on a pending case related to federal government vaccine mandates.

She also claimed her administration is still promoting COVID-19 vaccines, blaming "mixed messaging" from the Biden administration for stalled progress on convincing more people to get the shots. "Mandates don't work, it digs people in."

I asked the governor whether she would encourage Iowans to wear masks in indoor public spaces on a voluntary basis. "Absolutely, if you want to wear a mask, you wear a mask."

But would she encourage more Iowans to wear face masks?

And so, you look at statistics in states that have locked down, masked up, some of the most egregious attacks on freedom and civil liberties. And their statistics are not any better than a state that has remained open and free.

Who's sending mixed messages now? Reynolds implies that letting people ignore basic public health measures is a civil liberties issue, and Americans who refuse to get vaccinated or wear masks are principled heroes.

By the way, Iowa has done worse in terms of per capita COVID-19 cases and deaths than many states that embraced CDC guidance. As for Iowans doing "the right thing," anyone who's been shopping lately can tell you few people are wearing masks, despite the Omicron surge.

Katie Akin reported for Iowa Capital Dispatch on January 4 that Republicans led by State Representative Jon Jacobsen have drafted a bill that would ban private businesses from adopting policies to keep employees or customers healthy.

If an employer violated the bill and required vaccinations, they would be liable “for any adverse reactions, injuries, disabilities or death” that resulted from the requirement. The business would also lose state licenses or permits.

The bill encompasses all vaccines, not just those against COVID-19.

While proponents of the legislation compared it to a Montana law, Akin noted that "Montana’s law allows mask mandates and incentives to receive the vaccine. The proposed Iowa bill would prohibit both things." The Iowa bill also has no exemption for health care facilities that are subject to federal vaccine mandates for some employees.

House Speaker Pat Grassley and Senate Majority Whip Amy Sinclair didn't endorse a specific bill at the press association's forum, but both condemned vaccine mandates, returning to the talking point several times. Grassley said the legislature "needs to be prepared to act," depending on how the Supreme Court rules.

During the Iowa Capitol Press Association forum, I asked Grassley whether he has been vaccinated against COVID-19. During a March appearance on the Iowa PBS program "Iowa Press," the speaker said he had "chosen not to" get vaccinated, adding that his "personal choice" had "nothing to do with a political stance or anything like that."

Grassley said today he's been "giving the same answer" for the past year: "I don't think individuals should have to share that personal health information."

Will he encourage Iowans to get vaccinated? "Absolutely, if that's a choice that Iowans have reached with their medical professional, they think it's within their best interest [...] but I don't think it's the role of the government to tell them that they shall do it to keep employment and other things like that."

I noted that the governor has promoted vaccinations and even got her shot on live television. Senator Sinclair had just mentioned a few minutes earlier that she's been vaccinated. Grassley replied, "I will continue to give the same answer. I think it's a personal choice that each individual will have to make. As far as sharing whether they're vaccinated or not, hat's their personal decision, whether they share that information."

Perhaps Grassley has protected himself and those close to him, but is afraid to alienate the anti-vaccine activists Republicans depend on. Or maybe he has ignored the best medical advice and the desperate pleas of health care professionals, and is afraid to admit he refused a vaccine most Iowa adults have accepted. Neither stance shows any courage or leadership qualities.

P.S.—To my knowledge, Iowa Senate Majority Leader Jack Whitver has not clarified whether he got one of the COVID-19 vaccines. Please let me know if you have seen otherwise.