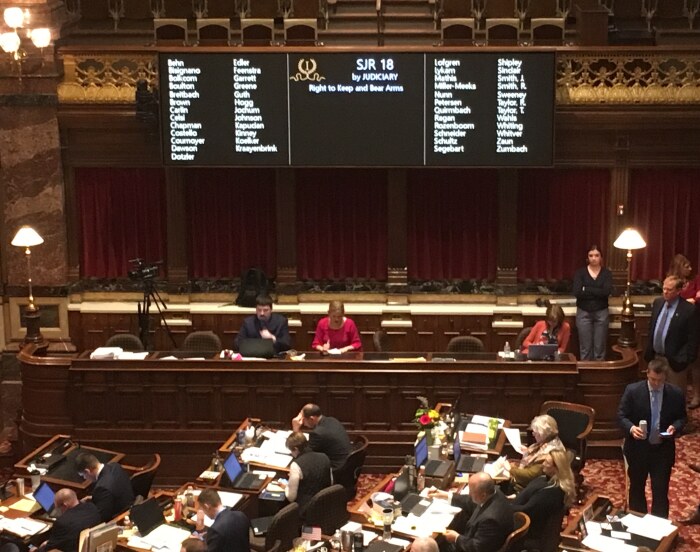 Iowa Senate kicks reporters out of chamber: Why it matters

During the five years of their trifecta, Republican lawmakers shredded a 43-year-old collective bargaining law and overhauled a judicial selection process that had been in place for nearly six decades.

Now Iowa Senate Republicans are tossing out more than a century of precedent by refusing to seat any journalists on the chamber’s press bench. For the session that begins on January 10, they are relegating reporters to public galleries far removed from the action.

Why should anyone care where reporters sit at the Iowa capitol? Take it from someone who has never been allowed to work on the press bench: losing access to the chamber will greatly hinder news gathering in the Senate.

I don’t know when Iowa media were first allowed to report from the legislative chambers, but journalists have used the Senate press desks for more than 120 years. The Iowa Senate journal from January 9, 1900, notes that a motion carried to authorize the secretary of the Senate “to assign seats in press gallery to reporters.”

A statement from the Iowa Capitol Press Association noted, “In moving reporters off the floor, the Iowa Senate becomes one of only a handful of state legislative chambers across the country to limit access in this way, according to information from the National Conference on State Legislatures.”

The desks are much more than a place for reporters to set their papers and keep devices charged. Journalists can take close-up pictures of the speakers during Senate debate. While the Senate is as ease, such as when one party is caucusing, or committees are meeting elsewhere in the building, senators often walk over to speak with reporters in the press area.

Clay Masters of Iowa Public Radio posted this picture, which he took from the Senate press gallery in 2017.

This is the view from the Iowa Senate chamber bench (taken in ’17). I was struck at how easy it was to catch lawmakers, regardless of party, and talk between hearings and floor debate when I first moved here to cover the statehouse. That’s access in the senate is ending in ’22. pic.twitter.com/7cM3JYJisS

Masters added, “There were subtleties during floor debate that helped me follow issues when I was a statehouse reporter that you can’t get up in the gallery watching the backs of lawmakers. From the bench, you could also catch a legislator’s eye and request to talk with them later.”

Retired Des Moines Register reporter William Petroski, who covered the statehouse for the Register for many years, described the decision as “terrible for the public and terrible for readers.” He told the Washington Post,

Under the old rules that let reporters work from the chamber floor, reporters and lawmakers could quickly hold one another accountable, Petroski said.

“You could whisper someone a question; the number one thing is just clarifying what is going on,” he said. “I would routinely get the attention of senators and say, ‘Hey, did you really do this? Does this bill really say that?’ You avoid a lot of mistakes, a lot of misunderstandings. It’s not a gotcha situation, but it’s better for the flow of information.”

In contrast, from the public gallery, there is no way to communicate with legislators. And since the view of speakers is often obstructed, the balcony is a poor place to capture quality photographs or video of Senate proceedings. Nor is it a secure place for journalists to keep computers, cameras, or recording equipment.

I took this picture from one of the Senate’s public galleries in March 2019, during the floor debate on a pro-gun constitutional amendment. (My request to use one of the seats assigned for single day media visitors was denied, even though those desks on either side of the reporters in black and red were unoccupied.) 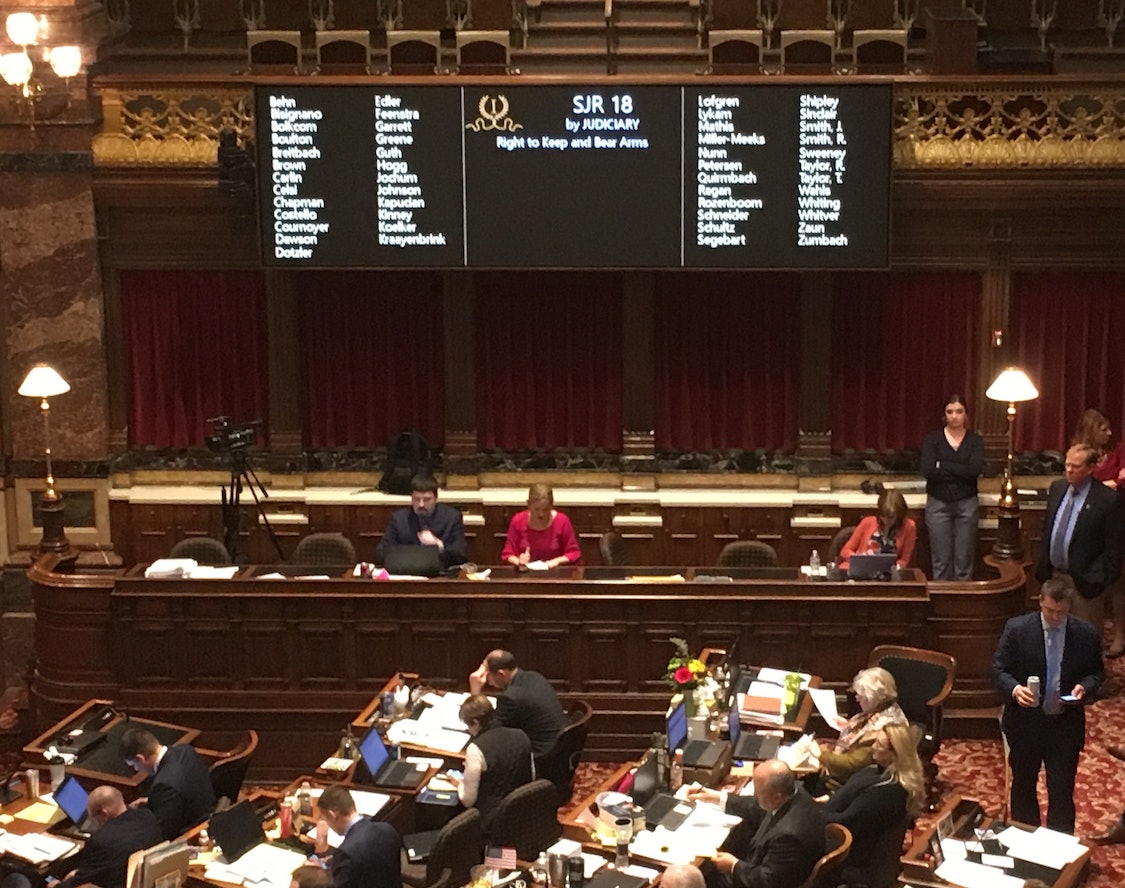 Barbara Rodriguez, who covered the legislature for the Associated Press and the Des Moines Register, tweeted, “Seeing chatter about fact that press can sit in second-floor public gallery. Ask any statehouse reporter in America, there’s zero comparison to real-time access to lawmakers, who often walk by to give reporters clarification/context about bills + process.”

OFFICIAL EXCUSE IS NOT PLAUSIBLE

Caucus spokesperson Caleb Hunter put a different spin on the decision in a December 28 email to the press association’s officers.

As it relates to media seating, the principle [sic] dilemma faced by the Senate is the evolving nature and definition of “media.” This is especially true in light of 1st Amendment concerns. As non-traditional media outlets proliferate, it creates an increasingly difficult scenario for the Senate, as a governmental entity, to define the criteria of a media outlet. Delegating the ability to define “media” to another entity is ultimately still government action. For that reason media seating will remain in the designated areas in the galleries. […]

Hunter’s pretext can’t withstand scrutiny. Senate staff will decide who qualifies as “media” when they determine which questions to answer and which interviews to arrange.

In any event, defining media is not so complicated. The Iowa Judicial Branch’s definition could easily be adapted for this purpose: “’News media’ includes any person who regularly gathers, prepares, photographs, records, writes, edits, reports, or publishes news or information about matters of public interest in any medium […].”

Hunter’s reference to “1st Amendment concerns” and “non-traditional media outlets” may stem from a legal memo the Institute for Free Speech commissioned in 2019 regarding the legislature’s denial of press credentials to me. The memo sent to Iowa House and Senate leaders and top staff in Governor Kim Reynolds’ office cited numerous court cases supporting this conclusion: “Because bloggers are covered by the same legal protections as traditional journalists, denying them press credentials to cover state government institutions has clear First Amendment implications.”

Longtime statehouse reporter James Q. Lynch of the Cedar Rapids Gazette, whose coverage often favors Republican perspectives, commented on Twitter that he wasn’t sure whether GOP leaders “are trying to keep reporters away from their members or keep their members away from reporters. Either way, it completely negates all their talk about transparency.”

Many Democratic state legislators have criticized the Senate’s policy on social media. Senate Minority Leader Zach Wahls told the Washington Post that Democrats were not informed about the planned change. He tweeted, “Democrats strongly oppose this decision and are exploring all options to reverse this astonishing attack on the public’s right to follow government activity.” Unfortunately, with only eighteen of the 50 Senate seats, Democrats are not in a position to change chamber rules.

Final note: The Iowa House and Senate press galleries were both closed to reporters during the 2021 legislative session, ostensibly due to the COVID-19 pandemic. However, unmasked Republican legislative staff routinely sat at those desks.

UPDATE: Rod Boshart, who just retired from the Cedar Rapids Gazette at the end of December, tweeted on January 9, “For more than 30 years I had the privilege of sitting in the first chair on the west press bench in the Iowa Senate chambers at the Capitol to witness and document the workings of democracy. I never realized what a privilege that was or how fragile that democracy was until now.”

It is true that non-traditional media are increasingly interested in covering the Iowa Legislature. Some would call Iowa Capital Dispatch “untraditional,” even though we publish in traditional newspapers and TV and radio websites all over the state as well as on our website. What Senate Republicans aren’t saying is they have tried, unsuccessfully, to exclude certain nontraditional media that report from a partisan point of view. This concern is shortsighted and misplaced, because shutting reporters out will never lead to more accurate or fairer reporting. […]

If Senate Republicans can’t manage to write a definition of media that passes constitutional muster, how can Iowans trust them to write complex legislation that overhauls the income tax, regulates controversial issues like gun rights and abortion, defines criminal behavior or addresses technical legal, medical and environmental issues?

Media access to the people who make laws is a critical component of representative government. Primarily for this reason, the Iowa Capitol Press Association is extremely disappointed in the Iowa Senate’s decision to move reporters out of the press work stations on the chamber floor and into the upstairs gallery.

In moving reporters off the floor, the Iowa Senate becomes one of only a handful of state legislative chambers across the country to limit access in this way, according to information from the National Conference on State Legislatures. For more than 100 years, reporters have worked from the press work stations on the chamber floors in the Iowa House and Senate to cover the Legislature and the taxpayer-financed officials who make state laws. For more than 100 years, the setup has served all parties well: the press, state lawmakers, and most importantly the public, which has benefited from the reporting that comes from that access.

Having real-time access to lawmakers allows reporters to provide important clarification, context and additional information to the public. Lawmakers who have real-time access to reporters can pass along news that might not otherwise be reported, and also hold journalists accountable for errors or unclear information in stories. Putting reporters in the upstairs galleries puts up new barriers to this process, and makes it more difficult for reporters to serve as the eyes and ears of the public. The better we can do our job, the better understanding the public will have of what their elected representatives are doing on their behalf.

We are pleased the Iowa House has pledged to maintain press work stations on the House chamber floor, and we hope the Iowa Senate reconsiders, and works with the press to return reporters to the Senate floor. In the meantime, the Iowa Capitol Press Association will continue to advocate for conditions in which press corps members can, for the benefit of the public, conduct their work safely and effectively.

Supporting the Iowa Capitol Press Association on this issue are the Iowa Broadcast News Association and the Iowa Freedom of Information Council.

We appreciate the recent discussion regarding media seating for the Iowa Senate. The media plays an important role in the function of our republic and we respect that role.

As it relates to media seating, the principle dilemma faced by the Senate is the evolving nature and definition of “media.”  This is especially true in light of 1stAmendment concerns.  As non-traditional media outlets proliferate, it creates an increasingly difficult scenario for the Senate, as a governmental entity, to define the criteria of a media outlet. Delegating the ability to define “media” to another entity is ultimately still government action.  For that reason media seating will remain in the designated areas in the galleries.

The main concern about gallery seating for members of the media is access to Senators. We acknowledge that concern and will endeavor to maintain a sustainable level of access to Senators. Committee meetings will all be held in Room 116. Subcommittees will be held in several rooms on the Senate side of the building increasing the movement of members throughout the building.

For the security of equipment and personal belongings, we would like to continue discussions in an effort to adequately secure your belongings and your employer’s equipment. Whether that solution is in the galleries or the media room on the ground floor, we will continue to work to find an agreeable solution.