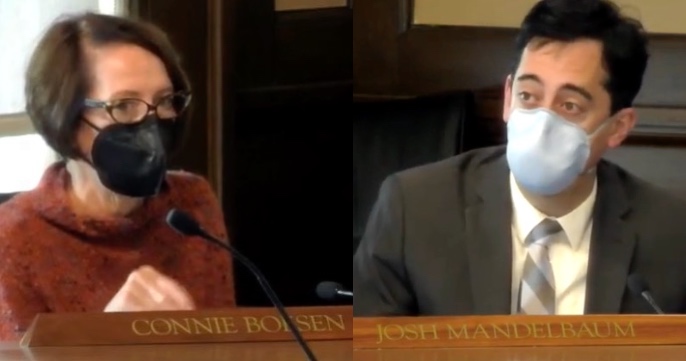 Natalie Harwood: Most of the Des Moines City Council left our most vulnerable open to frostbite and death in the elements.

This week in Des Moines, temperatures are anticipated to plummet into the negatives. Despite this fact, and even in light of the freezing death of a Des Moines citizen last year outside of a closed warming center, the Des Moines City Council is refusing to act on opening a 24-hour emergency warming center. In doing this, they are condemning the most vulnerable people in our community to suffer in the frigid temperatures, or worse, and are in direct opposition to their own campaign promises.

At the January 10 city council meeting, newly elected council member Indira Sheumaker called on the body to hold an emergency meeting to move on the issue of a warming center. A special session was called for Friday, January 14.

During that session, council member Connie Boesen, who explicitly campaigned on helping houseless people, asserted that unhoused folks should be going to Central Iowa Shelter Services (CISS), and if they aren’t, it’s because they “do not want to follow the rules”.

Sheumaker explained that she went out and spoke to unhoused community members who weren’t staying at CISS. They expressed concerns about the conditions at the shelter. One individual said the crowding is a trigger for their PTSD. Another said the shelter conditions are not sanitary and don’t allow people to take precautions needed against COVID-19.

Sheumaker presented research about how other similarly sized Midwest cities are managing warming centers, and put forth a motion for the creation of a 24-hour, no-barrier emergency shelter. While she was speaking, council member Josh Mandelbaum put forth a motion to adjourn and the meeting ended abruptly. The entire council, save Sheumaker, abandoned their duty to the community and left our most vulnerable open to frostbite and death in the elements.

The unhoused people in our community are just that: people. Human beings don’t “choose” to risk a brutal death in the elements because they simply don’t want rules. Houseless people weigh the options, and some determine the restrictions and conditions at CISS are simply not bearable. It is not that they do not want to follow rules; it is that the risks of the conditions at the shelter are too high.

That is not to say that CISS is a bad place. But it does not fill the role of a 24-hour emergency warming center. The city should provide that service.

Houseless people live here. They pay taxes on the goods they purchase. They are part of the fabric of our community. But in exchange, they don’t get trash service to their camps like those who lives in houses do, nor water, nor sewer, nor snow cleanup. Their camps get mowed down by the city, and their only possessions thrown away.

In December, there were six “emergency encroachment cleanups," meaning the camps in which people live were mowed down with no 10-day notice or possibility of an appeal process. The city stripped these individuals of their only belongings and only sources of shelter right when winter was beginning. Now, when the council is asked to help by simply providing some empty space with a roof and a cot, they walk out.

Boesen’s campaign website is still up and says, “too many citizens are left unhoused without access to homes that are both safe and affordable…it is important to me to protect the ability of every Des Moines resident to feel at home within their city."

However, when it came time to do what she was elected to do, to make the houseless residents of Des Moines feel at home, she and the rest of the council abandoned them. Council members publicly voiced dangerous myths about the moral character of houseless people and used them as an excuse to abandon their duty as community leaders. I can only hope they change course before our community experiences yet another tragedy.

Natalie Harwood is a Des Moines resident, podcaster (Rock Hard Caucus), and activist. She can be reached at natalieaharwood@gmail.com.

Top images of Connie Boesen and Josh Mandelbaum are screenshots from the official video of the Des Moines City Council's January 10 work session.