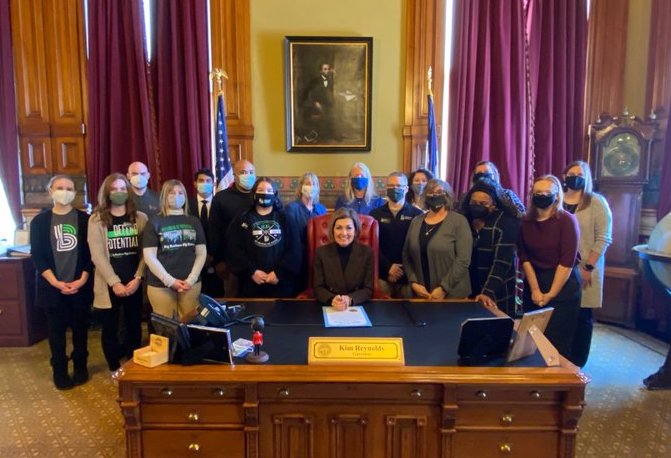 Governor Kim Reynolds returned to the capitol on January 18, after canceling her public events on January 13 and 14. Announcing those cancellations, staff said in a statement that the governor "is not feeling well, but has tested negative for COVID-19." Her spokesperson Alex Murphy did not respond to subsequent messages seeking to clarify whether Reynolds was tested again over the holiday weekend.

At least five individuals associated with the Iowa House or Senate have tested positive for COVID-19 in recent days, including Democratic State Senators Zach Wahls and Nate Boulton. (The legislature does not require lawmakers or staff to report coronavirus infections.) Reynolds, Wahls, and Boulton are all vaccinated and boosted for COVID-19.

The governor spent considerable time with her face uncovered around other unmasked people last week: at a crowded Iowa GOP breakfast on January 10, while delivering her Condition of the State address in the House chamber the following day, and while attending the Iowa Supreme Court chief justice's report to lawmakers on January 12.

Many medical experts recommend testing five to seven days after a known exposure to COVID-19. NPR's Melody Schreiber and Jonathan Franklin reported on January 18, "With the omicron variant, there have been reports that rapid tests are negative during the first day or two of symptoms." (Wahls disclosed that he tested negative one day before testing positive.)

A January 18 post on Reynolds' official social media accounts showed her surrounded by people after signing a proclamation celebrating mentors. Everyone in the frame other than the governor was wearing a mask.

Jan. marks the 20th Anniv. of #NationalMentoringMonth! Mentors are so vital for the emotional well-being and growth of our youth! Today I signed a proc celebrating and thanking our wonderful mentors in Iowa and the impact they have on our communities and state! pic.twitter.com/8ahdOtP8vS

It's rare for anyone posing in similar photos with Reynolds to be masked. For more typical examples, see images posted on Twitter or Facebook on November 10, December 1, two venues on December 7, December 8, December 16, and January 6.

A media advisory from the governor's office said Reynolds plans to attend "Veterans Day on the Hill" in the capitol rotunda on January 19. She will hold public events in Dysart, Van Meter, Monticello, and Davenport over the following two days.

Final note: Every state lawmaker who posed in this group photo of attorneys should get tested for COVID-19, if they haven't already.

Iowa's lawyer legislators - we're missing a few but you snooze you lose pic.twitter.com/LQZuorfyso

UPDATE: Speaking to reporters at the capitol on January 19, Reynolds "she tested negative for COVID again this morning in addition to a negative test last week," according to Stephen Gruber-Miller of the Des Moines Register.

Her staff still have not clarified whether she was tested over the weekend or why visitors to her office on January 18 all wore masks, which is unusual for Iowans in photo-ops with the governor.