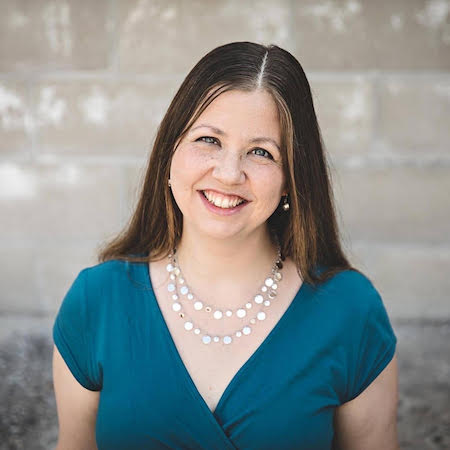 Bethany Gates is a Certified Professional Midwife from Vinton (Benton County), where she lives with her husband, Judah, and their 4 daughters.

Here in Iowa, CPMs are unregulated, and the Iowa Code does not have any section addressing their practice. While this may sound like freedom in theory, the reality is that midwives face many challenges as they strive to provide quality care, because Iowa does not license the profession.

CPMs are nationally credentialed after completing clinical requirements and passing an 8-hour certifying exam. CPM training meets the International Confederation of Midwives training standards, which is the standard globally for midwifery training and is recognized by the American College of Obstetricians and Gynecologists as the appropriate training for midwives providing care.

Like Certified Nurse Midwives and OB/GYNs, CPMs provide care to women throughout their pregnancy, birth, and postpartum period. They see clients regularly during pregnancy, assessing overall health and well-being of both mom and baby, and assessing for any risk factors that might preclude a client from planning a home birth.

CPMs go to their client’s homes when their clients are in active labor, and monitor the baby and the mother throughout the course of labor and birth. We then provide the follow-up postpartum care, often in client’s homes, to assure an appropriate recovery is taking place and to assess the baby.

In the mid-1990s, 2008, and 2013, the State of Iowa charged three different CPMs with practicing medicine without a license. Those midwives were not charged due to any poor outcome, but because a hospital-based provider did not believe the midwife should be practicing. Since no state law addresses our practice, prosecutors brought charges.

In addition to practicing with the risk of being put in jail, unlicensed midwives cannot purchase anti-hemorrhagic drugs that they are trained to use, and that are well within their scope to carry and utilize. Unlicensed midwives are very limited in where they can send their clients for prenatal lab work and ultrasounds, due to most facilities requiring the ordering provider to have a state license.

When something comes up that requires consultation with a hospital-based provider, many licensed providers are hesitant to consult with an unlicensed midwife, due to the liability concerns that come with consulting with someone the state doesn’t recognize as a licensed provider.

Most planned home births result in the birth taking place at home, but when a transfer is indicated during labor, many hospitals refuse to consult with the midwife, accept her records, or take report from her during the transfer. Some clients are treated during transfers as if they were a drug addict off the street coming in with a history of no prenatal care. In some cases, women are actually told they have to go to a different hospital or be subjected to an unnecessary cesarean, on the grounds that they are "high-risk" because they planned a home birth. Keep in mind that the vast majority of home birth transfers are not emergencies, but are are for pain relief.

PAST EFFORTS TO LICENSE CPMs IN IOWA

The history of the pursuit of licensure for CPMs is vast and long. In 1999, Iowa midwives asked the state legislature to authorize a scope of practice review. The Iowa Department of Public Health presented their scope of practice review findings in 2000, which determined that CPMs should be offered a license, and a midwifery board should be established under the state agency.

That was 22 years ago. Since then, midwives and their supporters have lobbied the state legislature almost every year, asking for a license. Of primary concern was the fact that in Iowa, midwives can be arrested and jailed for practicing without a license, despite the fact that the state has chosen neither to offer a license, nor to criminalize the practice of midwifery.

In all this time, no midwife bill ever made it to the Iowa House or Senate floor.

SAILED THROUGH THE HOUSE, GUTTED IN THE SENATE

This year, a midwifery licensure bill, House File 2547 (formerly House Study Bill 123 and House File 2291) advanced through the Iowa House, passing almost unanimously through two full committees, and receiving 93 votes on the floor, with only two votes against.

Throughout that process, zero lobbyists or members of the public spoke in opposition to the bill at House subcommittee meetings. Midwives and their supporters filled the rooms both times.

The language in House File 2547 was the same as in bills from prior years, so this wasn’t a new idea. No one spoke against the midwifery bill on the House floor. For the first time, after more than two decades of work, a CPM licensure bill advanced out of an Iowa legislative chamber.

The midwife licensure bill went to the Senate, where it was erroneously assigned to the State Government Committee. The bill came out of the House as a Ways and Means bill, and that’s where it should have gone in the upper chamber.

The subcommittee set a meeting date for March 15, 22 hours after the bill was assigned to them. At the last minute, they changed the meeting location, which cut the meeting to just 30 minutes. That meant that many people who wanted to speak in favor of the bill—some in person, along with several midwives who attended via Zoom—were not given the opportunity. Lobbyists for medical groups took more than half of the allotted speaking time, and midwives did not have a chance to respond to blatant lies those lobbyists tossed out.

Less than 24 hours later, the full Senate State Government committee met and discussed the midwife licensure bill.  They proposed an amendment that none of the midwife lobbyists had seen. In fact, that amendment did not become publicly available until about 2 hours after the meeting.

The amendment deleted almost all of the bill, save three lines at the very beginning (which they amended to retitle). The revised has a paragraph about occupational licensing, and states that it will go into effect only upon the enactment of Senate File 487, a pending Senate bill on licensing. You can read the License Iowa Midwives update on that committee meeting here.

It is worth noting that most Republicans on the Senate State Government committee support the midwife licensure bill in its original form, but voted yes on March 16 to keep the bill alive. (March 18 is the legislature's second "funnel" deadline, and most bills must clear one chamber and a committee in the other chamber to remain under consideration for this year.)

The Democrats on State Government were also all in support, but voted "no" in committee due to the amendment, citing the fact that this new bill does nothing to help moms and babies. Senator Pam Jochum’s comments were entirely correct. Iowa midwives appreciate the bipartisan support and the reasons both Republican and Democratic senators gave for voting the way they did in committee.

Based on Senator Cournoyer's comments during the full committee meeting, it’s evident that Smith, the committee chair, is now using the CPM licensure bill as a political pawn. It is extremely unusual to delete a bill that passed almost unanimously out of one chamber, and to replace it with completely different language, which would go into effect only if a different bill in the other chamber is enacted.

We heard over and over from Cournoyer that "maternal health care is near and dear to my heart." But Smith's actions show a complete disconnect from the needs of Iowa women. Iowa ranks 49th in the nation for number of OB/GYN providers per capita. The maternal mortality rate has doubled over the last few decades, which means that women my age giving their babies are twice as likely to die today from pregnancy or childbirth related complications than our own mothers were when they gave birth to us.

Increasing the number of midwives who meet global training standards, as CPMs do, has consistently shown a significant decrease in maternal and neonatal mortality, as well as a decrease in billions of dollars globally in health care costs.

Women receiving care from home birth midwives who meet these standards have a 5.2 percent cesarean rate, whereas women cared for in a hospital setting see a 30 percent cesarean rate. Not only is this significant in the health of women, it represents a massive health savings when women are not subjected to surgical births unnecessarily.

Combine that with the improved health outcomes because of midwife-led care, and it’s evident that refusing to pass the very well vetted midwife bill in favor of advancing an agenda is a foolish decision, and one that Iowa women will not forget when they’re at the polls in November.

Top photo of Bethany Gates provided by the author and published with permission.