How could this happen?

Finkenauer needed at least 100 valid signatures from at least nineteen counties and hit nineteen exactly, with 100 in one county and 101 in two others. The Republicans who challenged her candidacy are seeking to reverse the outcome in court.

Miller needed at least 77 signatures from at least eighteen counties, and barely made it with 78 signatures in the eighteenth county.

Shipley needed at least 50 signatures from the Iowa House district where he is seeking re-election and was left with 52.

Many Iowa politics watchers have been wondering how these experienced candidates ended up hanging by a thread.

Bleeding Heartland asked all three campaigns why they didn't give themselves more of a cushion by collecting far beyond the minimum number of signatures. Only one candidate answered the questions.

Ask any experienced campaign staffer: you always want to submit far more signatures on nominating petitions than the law requires. Inevitably, some signatures will be struck because they are duplicates, or because the voter made a mistake like signing a petition for the wrong county.

When volunteers or campaign staff forget to fill in the top portion of a nomination petition, a whole page of up to 20 signatures may be tossed. A 2021 amendment to Iowa's election law gave the State Objection Panel (which traditionally had been generous to candidates) less discretion to let it slide when any of the fields shown here are left blank.

Iowa candidates have often relied on precinct caucuses to help them collect most of the signatures they will need. But caucus turnout in non-presidential years is always low, and Democrats in many counties held virtual caucuses instead of meeting in person on February 7, due to the surge in COVID-19 cases and hospitalizations.

That left most Democratic candidates for statewide or federal offices well short of the signatures they needed to turn in by March 18.

No one in either party should have taken this process for granted after Theresa Greenfield, a leading candidate for Congress in Iowa's third district, failed to qualify for the Democratic primary ballot in 2018.

Before this year, Finkenauer had been through the petition process twice as an Iowa House candidate and twice as a U.S. House candidate. Her next Federal Election Commission quarterly filing is due on April 15, so it's not clear how large her staff was during the main signature collection period. But her Senate campaign had raised about $1.9 million by the end of December and had seven staffers on the payroll during the fourth quarter of 2021.

This chart comes from the objection Republicans filed last month. The Finkenauer campaign cleared the 100-signature threshold in 20 counties—barely. 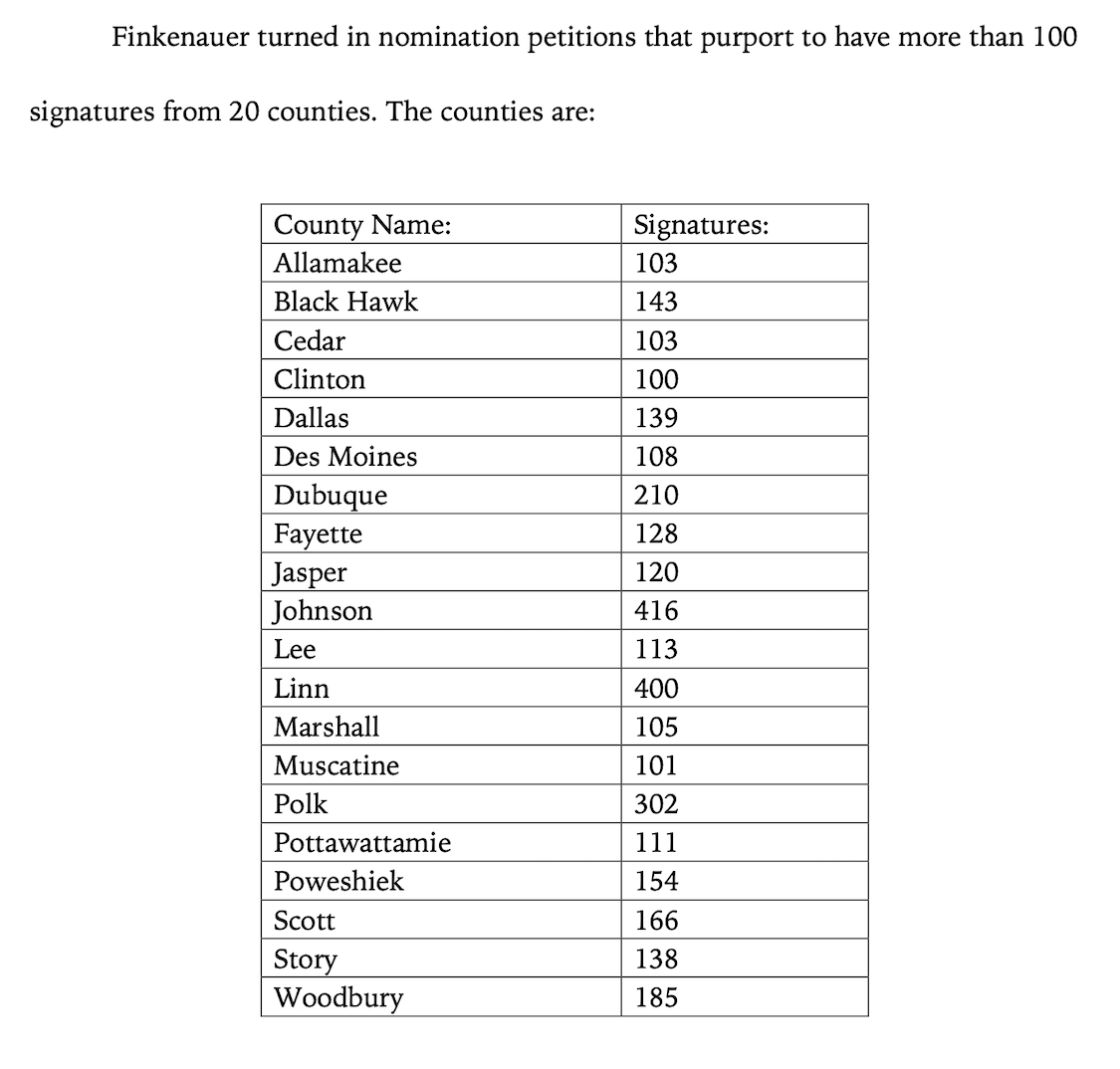 If any two of those had not withstood scrutiny, Finkenauer would be out of the race. And unlike Miller, she couldn't be nominated later at the Iowa Democratic Party's statewide convention, because two other Democrats running for Senate qualified for the ballot. One of them would have won the nomination outright on June 7.

Alan Ostergren, the attorney representing the objectors, twisted the knife during the panel's meeting after Miller described Finkenauer as a "very legitimate candidate."

Frankly, it doesn't matter if Abby Finkenauer served as a United States representative and has what anybody thinks is a legitimate campaign or not. There's actually a third candidate in this primary, who I've never heard of, and he managed to get his petitions done correctly.

Ostergren shot back: "And the way a legitimate candidate gets on the ballot is that they follow the rules" and turn in more signatures than they need.

CAMPAIGN SILENT ON WHAT WENT WRONG

Finkenauer's staff didn't respond to several messages over the past week seeking to clarify why they left themselves so vulnerable to an objection.

Adding to the mystery, the Democratic front-runner turned in her petitions on March 10, eight days before the deadline for submitting nominating papers to the Secretary of State's office. Why wouldn't the campaign spend that last week padding their totals in counties where they were barely over the line?

One theory I've heard: the candidate and her staff misunderstood the legal requirements. The election law Republicans enacted in 2021 more than doubled the mandatory signatures for U.S. Senate candidates (from 1,500 total signatures from residents of at least ten counties to 3,500 signatures including at least 100 from nineteen counties).

Although Iowa Code and the Secretary of State's primary candidate guide spelled out the new requirements, it's possible Finkenauer's staff thought they needed to meet the same threshold as other statewide candidates: 2,500 signatures including 77 from at least eighteen counties. If you were shooting for 77, then having a bunch of counties just over 100 signatures would look like a safe margin.

Whatever the reason for the misstep, Finkenauer has taken no responsibility for it. Immediately after the State Objection Panel meeting, a spokesperson for her campaign told some news organizations,

Washington Republicans and corporate special interests orchestrated this weak and partisan challenge in a last-ditch effort to save their pal Chuck Grassley from facing Abby Finkenauer and the toughest reelection challenge he’s had in decades.

The candidate has bragged about her situation with tweets pushing the same message: "The GOP just tried to knock me off the ballot. They failed. They’re scared because I'm the biggest threat @ChuckGrassley has faced in decades."

After Ostergren filed suit to overturn the panel's decision on Finkenauer's petitions, the candidate tweeted,

They're at it again: Republicans REALLY don't want Iowans to have a choice between me and @ChuckGrassley this November. Their pathetic partisan games didn't work earlier this week—and they won't work this time. We're not going anywhere.https://t.co/ZAB8N8GYUC

How about taking care of business so Republicans can't make this kind of mischief? It's anyone's guess whether Iowa courts will find the state panel properly dealt with the objections to Finkenauer's petitions.

Miller showed more humility after his brush with disaster, telling reporters, “We followed the advice of getting extra [...] Admittedly, it was pretty close.”

Miller has been elected attorney general ten times and ran for that office unsuccessfully in 1974. As a member of the State Objection Panel, he has considered dozens of challenges to nominating petitions. So he knows how often signatures can be struck for errors.

Yet his campaign submitted exactly 77 signatures from Black Hawk County, 77 from Mills County, 85 from Story County, and 80 from Warren County.

Various mistakes knocked out three of those counties, and seven signatures from Story were deemed invalid. Miller was close to losing two more signatures there, which would have put him below the threshold.

Miller's campaign didn't respond to phone messages or emails about what went wrong. His current level of staffing is unclear, since candidates for state offices won't disclose their spending during early 2022 until mid-May. CORRECTION: The Iowa Democratic Party has been paying Miller's campaign manager a full-time salary since last August. Whether he has hired additional staff since January 1 is unclear.

Bleeding Heartland user iowavoter spoke for many bewildered Democrats when he commented this week,

I'm amazed that candidates just barely meet a minimum requirement when so much is at stake. [...] This seems like basic grassroots politics to me. [...]

My own Pocahontas County is one of the smallest yet we cleared 100 signatures for Joel Miller for SoS [secretary of state] when he needed only 77. It took basically three of us volunteers working after the caucus to reach our goal.

After the panel determined he could stay on the ballot, the attorney general told reporters, "All's well that ends well."

But this drama isn't over yet. The plaintiffs seeking to reverse the panel's decision on Finkenauer claim Miller should have recused himself from considering that matter, as Ostergren had requested. (The idea is that Miller had a stake in whether the Senate candidate remained on the ballot, because some of his own signatures had been challenged on the same grounds.)

Attorneys tell me Iowa courts rarely second-guess officials' decisions on whether to recuse. Nevertheless, Miller's predicament muddied the waters. If his campaign had far surpassed the signature thresholds, he could have taken any potential objection off the table and taken one legal argument away from Ostergren.

Attorney General Miller submitted well over the number of required signatures, submitting more than 4,100 signatures for the required 2,500. He submitted 21 counties at or over the minimum threshold, more than the 18 counties required. The ultimately meritless challenge to the petitions was purely partisan, and an unseemly attempt to disenfranchise Iowa students.

I also opposed the Republican effort to disenfranchise Iowa State University students. I still wonder why four of the campaign's 21 counties were less than ten signatures over the minimum.

Ostergren also drafted the objection to Shipley's nominating papers, which claimed five of the House Republican's 53 signatures were invalid for various reasons. During the panel's meeting, Shipley conceded one voter did live just outside his new district, describing the mistake as an "oversight."

Two signatures came from residents of multi-unit buildings who had not written down the unit number. Echoing arguments raised earlier in the day, Shipley said Iowa Code does not require apartment numbers, and neither did the official petition form or candidate guide produced by the Secretary of State's office. For that reason, Shipley said, the signatures were "fully compliant" with state law.

One improperly dated signature was written as 3-13-52 (presumably the voter was writing his birth date). Shipley described that as a "scrivener's error."

Miller and State Auditor Rob Sand voted to count the signatures with missing unit numbers and the one with the wrong year, outvoting Secretary of State Paul Pate. All three panel members agreed to count one signature where the objector had claimed the city name (Fairfield) was not legible. That left Shipley with two more signatures than he needed.

Like many Iowa politics watchers, I wondered why on earth a two-term state lawmaker in a tough GOP primary race would turn in just 53 signatures.

Shipley explained via electronic message that he "initially submitted paperwork that was rejected because I had not checked the box [near the top of the petition form] indicating if I was filling a vacancy."

For that reason, he had to start over with petitions the weekend of March 12 and 13. He turned in more than the minimum, but an entire page was tossed out because he "accidentally indicated the wrong district number in the header." (District numbers changed when the legislature approved new political maps.) That's why he had only 53 signatures to begin with.

Shipley added that he appreciated that the attorney general and state auditor provided "a fair and just hearing."