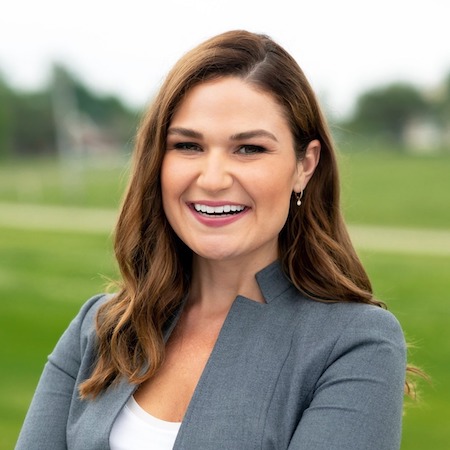 Judge rules Abby Finkenauer should be off primary ballot

A Polk County District Court has handed a big win to Republicans seeking to knock Abby Finkenauer off the Democratic primary ballot for U.S. Senate.

Judge Scott Beattie ruled on April 10 that the State Objection Panel used the wrong legal standard when it counted signatures with missing or incorrect dates. Consequently, the court found, Finkenauer's campaign "has failed to submit at least 100 signatures from at least 19 counties" as required by Iowa law.

Here's the full text of the District Court's ruling:

The Attorney General's office has not confirmed whether the state will appeal, but that seems likely, based on how it defends other lawsuits against state entities.

Plaintiffs Kim Schmett and Leanne Pellett challenged one signature from Allamakee County, where a voter had listed the zip code instead of the date, and two signatures from Cedar County: one with no date, and another apparently dated "6-6" instead of "2-6."

Judge Beattie's opinion rejected the state's argument that the State Objection Panel's decisions are not reviewable under the Iowa Administrative Procedure Act, "as the Panel is not an agency" under the relevant code chapter.

The court also rejected an argument the Finkenauer campaign raised as an intervenor in the case: that Schmett and Pellett lacked standing to bring the suit, since registered Republicans can't vote in Iowa Democratic primaries. (Schmett is a former Polk County GOP chair and Pellett is the Cass County GOP co-chair.)

The court rejected the plaintiffs' argument that Attorney General Tom Miller and State Auditor Rob Sand should have recused themselves from considering the objection to Finkenauer's petitions. Plaintiffs asserted that Sand was biased because last year, a staffer in the State Auditor's office referred to attorney Alan Ostergren as a "political hack." However, the court found "there was no other evidence of bias or prejudice on Sand’s part. It should also be noted that Sand even ruled in favor of some of Schmett and Pellett’s objections during the hearing."

The lawsuit asserted that Miller should have recused because a separate objection filed regarding his own nominating petitions raised several of the same points. But the court found,

For decades, the State Objection Panel has used a "substantial compliance" standard when considering challenges to candidates' nominating petitions. A 1988 determination in the Dvorak case was directly on point: signatures with missing dates were counted, because the date the voters signed could be inferred by the signatures that came immediately before and after on the petitions.

But Judge Beattie ruled, "Other than the Panel’s own limited precedent, the Panel cannot point to any clear statutory language or judicial precedent supporting this contention."

Iowa's election law contains provisions that are seemingly in conflict with one another. Code Chapter 43.15(2) states, "Each signer shall add the signer’s residence, with street and number, if any, and the date of signing."

But Iowa Code 43.14(2) enumerates the allowable reasons for not counting a signature.

d. A signature line shall not be counted if any of the required information is crossed out or redacted at the time the nomination papers are filed with the state commissioner or commissioner.

Judge Beattie sided with the plaintiffs, saying the court "is not bound by the Panel’s statutory interpretation, which gives rise to the idea of 'substantial compliance.'" No appellate court in Iowa "has adopted 'substantial compliance' in voting matters which could support the Panel’s interpretation." The opinion acknowledged a Polk County District Court did adopt that standard in a 2014 case about whether a candidate for governor qualified for the ballot, but noted that "While this opinion is instructive, it is not binding on this Court."

The "most important" part of the court's analysis was that using a "substantial compliance" standard would render the requirements of Iowa Code 43.15 "meaningless." That provision requires that eligible voters signing petitions "shall add the signer’s residential address, with street and number, if any, and the date of signing.”

The only logical interpretation of the statute, which gives it meaning, is that each signer must indicate the date they signed. It does not say that the date may be inferred or extrapolated from the context. The plain and obvious meaning is that the signature should be accompanied by a date indicating when it was signed. Failure to include the date means the signature is not valid.

The Panel did not correctly interpret or apply the law in this case.57 The Panel's decision was "[b]ased upon an irrational, illogical, or wholly unjustifiable interpretation of a provision of law," and as such, this Court must reverse the Panel decision. [...]

The Court takes no joy in this conclusion. This Court should not be in the position to make a difference in an election, and Ms. Finkenauer and her supporters should have a chance to advance her candidacy. However, this Court's job is to sit as a referee and apply the law without passion or prejudice. It is required to rule without consideration of the politics of the day. Here the Court has attempted to fulfill that role.

For that reason, Judge Beattie found the Finkenauer campaign didn't meet the signature threshold in Allamakee or Cedar County.

P.S., since some readers have asked: Governor Kim Reynolds appointed Beattie to the District Court in 2018.

UPDATE: Many people are asking how the Iowa Supreme Court will likely approach this case. I don't know. A few factors work in the Republican plaintiffs' favor: most of the justices are conservatives, one (Matthew McDermott) previously did a lot of legal work for the Iowa GOP and Republican candidates, and in a 4-3 ruling, the court's majority sided with Republicans on the biggest election-related case from 2020.

Working in favor of Finkenauer: the Iowa Supreme Court usually defers to executive branch agencies. Since at least 1988, the State Objection Panel has said a signature missing a date can be counted if the signing date can be inferred from other signatures on the same page. All this time, the state legislature has never amended Iowa Code to say a missing or incorrect date is a reason not to count a petition signature.

SECOND UPDATE: The Finkenauer campaign released the following statement on April 11 (enclosed in full below). It doesn't address why they cut it so close to the signature threshold in so many counties.

THIRD UPDATE: A spokesperson for the Iowa Attorney General's office told Bleeding Heartland, "Our office is discussing next steps with our client -- the panel -- so no decision has been made" regarding an appeal. LATER UPDATE: The state did file a notice of appeal.

FOURTH UPDATE: The Iowa Supreme Court has designated an hour for oral arguments, starting at 1 pm on April 13. That's longer than the usual oral argument, probably because the parties have so little time to prepare their written briefs. Stephen Gruber-Miller reported for the Des Moines Register,

The Iowa secretary of state's office has said it needs a decision "on or about" April 15 to finalize ballots so they can be printed and sent to military and overseas voters. Under federal law, those voters must be sent their ballots at least 45 days before an election, which for Iowa's June 7 primary would be April 23.

Appendix: Statement from the Finkenauer campaign

DES MOINES — Yesterday, in the dead of the night, an Iowa judge did the bidding of Chuck Grassley and his allies in Washington, and ruled in favor of a meritless and partisan legal action seeking to remove former Congresswoman Abby Finkenauer from the Democratic primary ballot for U.S. Senate.

Prior to this ruling, Abby Finkenauer’s ballot petition signatures had already been reviewed by the Iowa Secretary of State’s Office and the bipartisan State Objections Panel, and each time she was determined to have qualified for the U.S. Senate ballot.

Abby Finkenauer made the following statement:

“Our campaign submitted more than 5,000 signatures, 1,500 more signatures than are required to qualify for the ballot. We are confident that we have met the requirements to be on the ballot.

“This misguided, midnight ruling is an outrageous and partisan gift to the Washington Republicans who orchestrated this meritless legal action.

“We are exploring all of our options to fight back hard against this meritless partisan attack, and to ensure that the voices of Iowans will be heard at the ballot box.

“Since the beginning of this campaign, I have said that democracy is on the line, and it’s clear now more than ever that Republicans will stop at nothing to silence the voices of Iowans.