Foreign lobbying will be off-limits for Iowa officials, employees

Continuing a series on Iowa legislative happenings that attracted little notice while the House and Senate were in session.

State officials will be barred from “any outside employment or activity that requires the person to register under the federal Foreign Agents Registration Act,” under a new law that takes effect on July 1. In addition, applicants for state jobs or nominees for any position that requires Iowa Senate confirmation will have to disclose whether they have ever registered as foreign agents.

Staff for the Iowa Ethics and Campaign Disclosure Board (IECDB) found no evidence Kim Schmett or Connie Schmett violated state laws on lobbying or conflicts of interest through their outside work as consultants, according to a document prepared by IECDB Executive Director Megan Tooker. However, a review found several omissions on the government officials’ annual personal financial disclosure forms, for which board members approved a reprimand and $250 fine for Connie Schmett. Although staff suggested that the board direct Connie Schmett to stop making campaign contributions under the surname she used during her previous marriage, after a lengthy discussion the board voted that Connie Schmett did not violate state law by donating to candidates and political committees as Connie Russell.

Governor Kim Reynolds requested the review of the Schmetts’ activities in November, following an Associated Press report on the state officials’ work as registered foreign agents lobbying for Saudi Arabia. The board discussed the matter for more than two hours during a January 25 meeting. Following minor revisions, IECDB chair James Albert will sign a letter to Reynolds outlining the board’s findings and recommendations. Tooker distributed a draft letter to reporters during the meeting; I will post the final version as soon as it is available. UPDATE: Enclosed below the letter to the governor, with supporting documents. 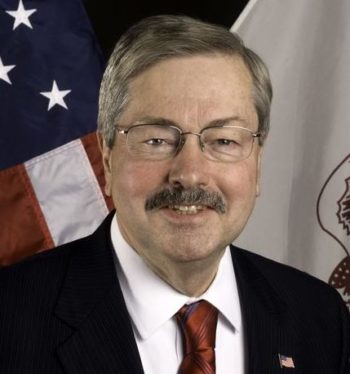 How Branstad, other governors were lobbied to weaken 9/11 victims law

Consultants working on behalf of the Kingdom of Saudi Arabia repeatedly contacted senior staff for Governor Terry Branstad in 2016, seeking his support in lobbying Congress to amend the Justice Against Sponsors of Terrorism Act (JASTA).

Newly-released correspondence shows Flywheel Government Solutions lobbied several governors who were veterans, saying JASTA posed a threat to American diplomats and military personnel. The foreign agents hoped the governors would sign a letter asking key U.S. senators to address “unintended consequences that set a dangerous precedent for our nation” in the law that allowed survivors of the 9/11 attacks and family members of victims to sue the government of Saudi Arabia.

The 28Pages blog previously reported on Flywheel’s work to “Engage and align selected Governors and Lieutenant Governors to take grasstops action, such as writing letters to their respective state’s congressional delegation, to appeal to Congress to repeal JASTA.” I enclose below the talking points and documents presented to staff for Branstad and other governors, including Asa Hutchinson of Arkansas, Matt Mead of Wyoming, Butch Otter of Idaho, Gary Herbert of Utah, and Robert Bentley of Alabama. The Iowa state archives provided those files in response to Bleeding Heartland’s records request.

Neither Branstad nor any other governor signed on to the effort, Flywheel Government Solutions partner Brian Salier told me today, so no such letter was ever sent to senators.

The 17 Bleeding Heartland posts I worked hardest on in 2017

Since I started writing for this website a decade ago, I’ve never worked harder than I did in 2017. This momentous year in Iowa politics provided an overwhelming amount of source material: new laws affecting hundreds of thousands of people, our first new governor since 2011, and a record number of Democrats seeking federal or statewide offices.

In addition, my focus has shifted toward more topics that require time-consuming research or scrutiny of public records. As I looked over the roughly 420 Bleeding Heartland posts I wrote this year, I realized that dozens of pieces were as labor-intensive as some of those I worked hardest on in 2015 or 2016.

Connie Schmett was registered as a foreign agent doing work on behalf of the Kingdom of Saudi Arabia through September 2017, a new filing shows. The revelation explains why Schmett and her husband, Kim Schmett, recently disclosed to the federal government a number of donations to Iowa Republican candidates and political committees they had made since March, when their work as consultants for the Qorvis/MSLGROUP previously appeared to have ended.