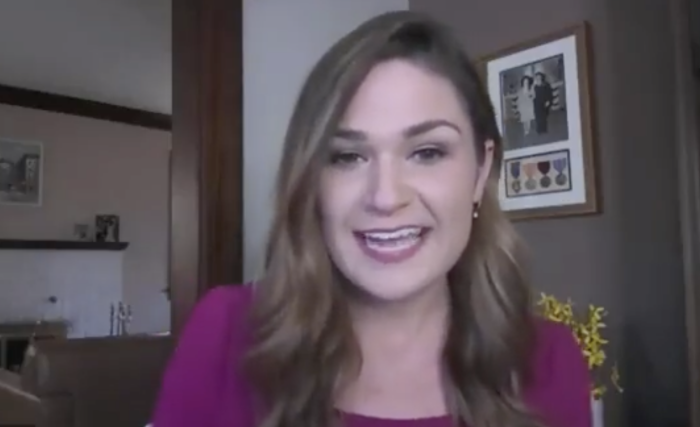 U.S. Senate candidate Abby Finkenauer avoided disaster when the Iowa Supreme Court unanimously ruled on April 15 that she should appear on the Democratic primary ballot.

But the five justices who joined the majority opinion signaled they weren't pleased by how Finkenauer criticized the District Court judge who had reached the opposite conclusion.

While walking through the facts and procedural history of the case, the majority opinion noted on page 5,

After receiving briefs and hearing arguments from the parties on April 8, the district court worked through the weekend and issued a thorough eighteen-page decision on Sunday evening, April 10.5 The court did so to ensure that there would be adequate time and opportunity for review by this court. We appreciate the district court’s courtesy and we trust that the parties do as well.

Footnote 5 observed that the Finkenauer campaign "filed an additional memorandum of law at 8:10 p.m. on Friday, April 8." (Here's that brief.)

Within the legal community, that unusual passage was widely read as the justices expressing their disapproval of how Finkenauer had characterized District Court Judge Scott Beattie.

Hours after he released his ruling, which determined Finkenauer had not submitted enough valid signatures to qualify for the ballot, the Democrat's campaign denounced the "outrageous and meritless midnight decision" in a news release. In that statement, Finkenauer asserted, "This misguided, midnight ruling is an outrageous and partisan gift to the Washington Republicans who orchestrated this meritless legal action."

I didn't agree with how Beattie resolved the apparent contradiction between two parts of Iowa's election law. But the late-night release of his decision didn't hurt Finkenauer. On the contrary, it gave her campaign's attorneys a little more time to digest the ruling and prepare briefs for an appeal. In addition, as the justices mentioned, the judge's quick work allowed the Iowa Supreme Court to hear oral arguments and publish a decision in time for election officials to print primary ballots.

A second news release on April 11 confirmed Finkenauer would appeal the "deeply partisan decision." In that statement, the candidate called Beattie's ruling a "massive gift to Washington Republicans" that "ignores decades of precedent, interferes in the electoral process, and makes a mockery of our democracy." A "background" section for reporters at the end of the release claimed,

Bleeding Heartland extensively covered the 2018 case, which had nothing to do with ballot access. Rather, Beattie dismissed a lawsuit filed by Iowa House candidate Kayla Koether, after her Republican opponent was declared the winner by nine votes when 29 absentee ballots that were mailed on time had not been counted. Though that ruling disappointed many Democrats, it was a reasonable interpretation of state law and Iowa's constitution, which give the legislative branch–not the courts–power to rule on contests of elections for state legislative seats.

The 2018 case was similar to Finkenauer's situation in one aspect: Democrats fumbled Koether's lawsuit by not including some of the disenfranchised absentee voters as co-plaintiffs. And Finkenauer's campaign fumbled by not submitting far more than the minimum number of signatures from various counties, which left her vulnerable to a bad-faith Republican effort to disqualify her.

Returning to the topic at hand: Finkenauer brought her judge-bashing message to more than 50,000 Twitter followers, tweeting on April 11, "it’s clear now more than ever that Republicans will stop at nothing to silence the voices of Iowans." She tweeted later the same day that "In the dead of the night, a Republican judge made a partisan decision to kick me off of the ballot."

The candidate continued the narrative during an April 11 interview with reporter Mitch Fick of KGAN-TV in Cedar Rapids.

Abby Finkenauer's U.S. Senate campaign is in jeopardy after a judge's ruling last night that three signatures on her filing papers aren't valid.@Abby4Iowa talked to me tonight about her reaction to the decision and her level of confidence that she'll be on the primary ballot. pic.twitter.com/9evSZvJA8M

After saying she was "honestly shocked" by the ruling, Finkenauer depicted the District Court judge as an agent for Republican operatives: "It is a scary time that this can happen, and honestly, it shows just how desperate they are, and the fact that--I don't think Chuck Grassley thinks he can beat me in November, so they're trying to beat me literally from the bench."

When Fick asked how confident Finkenauer was about reversing the District Court decision, the candidate again accused the judge of doing Republicans' bidding.

Well, we're right on the law. And so, if the Iowa Supreme Court follows the law as it stands, and doesn't decide and pick and choose based on who they like, who they don't, who's Republican, who's Democratic, and who they want on the ballot, we should be on the ballot in June, and again in November to beat Chuck Grassley.

Attorneys who are members of both parties told me last week that swinging at the District Court judge was not likely to help Finkenauer as her campaign took its appeal to the Supreme Court. Some also expressed concern about undermining confidence in Iowa's judiciary, which traditionally has not approached political cases with a partisan lens.

But the candidate clearly wasn't worried. The day the justices heard oral arguments, the Finkenauer campaign slammed the judge in not one but two fundraising appeals. One email blast said, "This partisan ruling from Sunday night was nothing but a gift to Washington Republicans and a mockery of our democracy," and the other used bold type to tell supporters, "Even though this lawsuit is total B.S., a state judge sided with the Republicans."

I searched the Iowa Ethics and Campaign Disclosure Board's database for any political contributions Beattie had made from 2010 to 2018, when Governor Kim Reynolds appointed him to the Polk County District Court. (Iowa's Code of Judicial Conduct does not permit judges to donate to candidates for public office.) I found zero contributions to candidates for any state or local offices, and just two political contributions of any kind: for $50 and $75 to the political action committee run by the Iowa State Bar Association.

The OpenSecrets Donor Lookup tool likewise shows zero donations from Beattie to any candidates for state of federal offices.

Finkenauer was wrong to accuse the judge of partisan bias and hype that narrative in order to boost her fundraising and social media following. (Her campaign staff didn't respond to inquiries about the Supreme Court's praise for Judge Beattie's work.)

Final note: six of the seven Supreme Court justices are Republican appointees. They could have gone in several different directions when deciding whether Finkenauer should appear on the ballot. It was never going to come down to "who they like" and "who they don't."