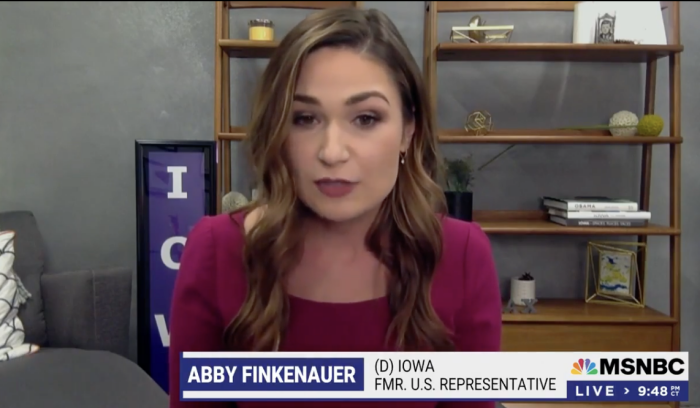 Randy Evans: What Abby Finkenauer should know — and what Donald Trump also should understand — is that it is not evidence of bias when a judge disagrees with your position in a dispute.

A common refrain from Democrats during Donald Trump’s years in the presidency was that he was undermining public trust and confidence in our courts with his talk of judges being biased and having political motives when they ruled against him.

Trump’s comments were a bunch of hooey — and it certainly was a bunch of hooey last week, too, when a prominent Iowa Democrat, U.S. Senate candidate Abby Finkenauer, sang from the Trump song sheet about judicial bias.

Finkenauer was embarrassed and angered by Polk County District Court Judge Scott Beattie's determination that she failed to collect enough signatures on her nomination papers to meet the state law's requirements for candidates for U.S. Senate. In the end, the Iowa Supreme Court unanimously reversed the decision, allowing Finkenauer to appear on the ballot for the June 7 Democratic primary election.

But the Supreme Court’s decision did not erase the misguided claims Finkenauer made about supposed outrageous political gamesmanship and a partisan “Republican judge.”

Here’s a quick refresher on what she said:

Finkenauer could have taken the high road after the judge’s decision. She could have politely said she disagreed with his conclusion and would ask the Iowa Supreme Court to intervene. But she didn’t.

She resorted to cheap, over-the-top political language that makes a mockery of Iowa’s longtime merit system for choosing judges. She further divided Iowans who already see too many issues as us-versus-them.

What Finkenauer never mentioned in her statements is the fact that separate sections of Iowa law containing requirements for candidates’ nomination papers are seemingly in conflict. One law says each person signing a candidate’s papers “shall add the signer’s residence, with street and number, if any, and the date of signing.”

But another section lays out reasons a signature line will not be counted. That includes the absence of an eligible voter’s signature, the absence of the signer’s residential address, with street and house number and city. The signature shall not be counted if the person supplies only a partial address, a post office box address, or if the signer’s address is outside the district the candidate is running in.

Sharp-eyed readers will note that the grounds for disqualifying a signature do not include the failure to write a date — even though that is a piece of information the law requires.

It is the job of judges to decide how to resolve such legal conflicts. And when people in a dispute disagree on the judge’s decision, they can ask the Iowa Supreme Court to review it. The court did that 120 times last term. That shows capable lawyers representing various participants in legal disputes often do not agree on what the applicable Iowa laws mean.

What Abby Finkenauer should know — and what Donald Trump also should understand — is that it is not evidence of bias when a judge disagrees with your position in a dispute. It certainly is not political gamesmanship to file a lawsuit challenging an action or decision.

Judge Beattie explained in his ruling that Finkenauer failed to submit enough valid signatures: “The court takes no joy in this conclusion. ... However, this court’s job is to sit as a referee and apply the law without passion or prejudice. It is required to rule without consideration of the politics of the day. Here the court has attempted to fulfill that role.”

That Finkenauer’s candidacy came within a hair of ending last week is no one’s fault but hers. It wasn’t the Republicans’ fault. Nor was it Judge Beattie’s fault.  Four other candidates for the Senate all cleared the nomination-paper signature hurdle without a hiccup: Democrats Michael Franken and Glenn Hurst, and Republicans Jim Carlin and Chuck Grassley.

But Finkenauer forgot that the number one priority in any political campaign is not building a fancy website, writing issue papers, or seeking campaign donors. The top priority is getting on the ballot.

To do that, Iowa law requires U.S. Senate candidates to collect at least 3,500 signatures on nomination papers, with a minimum of 100 signatures coming from each of 19 counties.

Yes, Finkenauer collected 5,000 total signatures. But she only had 100 in Allamakee County and 101 in Cedar County. She met the 100-signature requirement in only 17 other counties.

Two Iowa Republican voters objected to her nomination petition, citing several deficiencies. Those included some people signing more than once, some giving only partial addresses, and some with improperly dated signatures.

In the end, it came down to one signer in Allamakee County and two in Cedar County who either failed to date their signatures or wrote an obviously incorrect date (6-6-27).

(Don’t kid yourself and think for a minute Finkenauer would have let it pass without a challenge if Grassley had so little room for error on his nomination papers.)

What saved Finkenauer’s candidacy, the Iowa Supreme Court said, was this: “We believe we must be guided by the Legislature’s last word on the subject.” That came last year, when lawmakers changed the election statute and specified which kinds of objections to nominating papers "shall be sustained."

Absent from those grounds was a signer failing to date the signature.

While Finkenauer was criticizing Republicans for trying to subvert her campaign, it may turn out that her own fuming has done more to harm her candidacy.