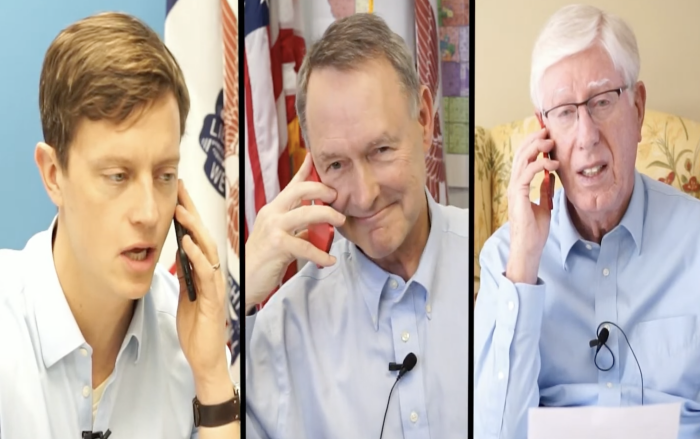 Democratic candidates for U.S. House, U.S Senate, and governor were given speaking time at the Iowa Democratic Party's annual Liberty and Justice Celebration on April 30.

But the party's three statewide elected officials and candidates for other statewide offices were relegated to pre-recorded videos. Even worse, those videos seemed designed for comic relief, rather than as a way for candidates to connect with hundreds of activists who attended the Des Moines fundraiser.

The missed opportunity was especially regrettable for Joel Miller and Eric Van Lancker, who are competing against each other in the June 7 primary for secretary of state.

The Iowa Democratic Party did not post the videos online following the event and declined my request to provide copies of the files. I pulled the clips enclosed below from the live-stream; although the sound quality was poor for the first video, there are subtitles.

A skit featuring State Auditor Rob Sand, State Treasurer Mike Fitzgerald, and Attorney General Tom Miller ran early in the evening's program—"because no one can warm up a crowd like a lawyer, an auditor, and a treasurer," Iowa House Minority Leader Jennifer Konfrst joked.

The script had the three Democrats chatting over the phone about organizing a carpool to the Liberty and Justice event. Fitzgerald touts his office's programs encouraging Iowans to save money for college or retirement, and find unclaimed property that might belong to them. Miller talks about his office's consumer protection work. Sand displays his trademark love for efficiency, hunting, and Casey's breakfast pizza.

The Jason Momoa references allude to Sand's recent encounter with the movie star at the Waveland Cafe in Des Moines.

I understand why the event organizers wouldn't want to overload the program with too many speeches. And in fairness, most of the 400 to 500 attendees had probably heard from Miller, Fitzgerald, and Sand at past events.

But the three officials are on the ballot in what may be a tough year for Democrats in Iowa and around the country. The party could have given them each a few minutes to hit key points: what they've accomplished, why they're running again, what's at stake if Republicans win their races, and how activists can help them get re-elected.

This clip had some laugh lines, but asking about the candidates' preferred state fair food, karaoke song, or first concert was nothing close to an adequate way to introduce them to the audience.

They should have each had a few minutes to speak directly to these highly engaged Democrats. Lots of primary voters may be asking local contacts for guidance soon on which candidate should face Secretary of State Paul Pate. What could anyone say, based on this video? Pick the guy who grew up on a dairy farm over the guy who worked at a drive-in?

The Iowa Democratic Party could have shaved some time off state chair Ross Wilburn's opening remarks and the various "pass the helmet" fundraising breaks. Norwood, Miller, and Van Lancker deserved a chance to make their case and inspire potential donors or volunteers. They won't have another opportunity to speak to such a large audience before the June primary.

P.S.—Bleeding Heartland published background on the non-incumbent statewide candidates when they launched their campaigns: Van Lancker and Miller last September, and Norwood in February of this year.

UPDATE: After this post was published, Joel Miller commented via Twitter, "The recording was a compromise. The initial plan was worse: no recording."