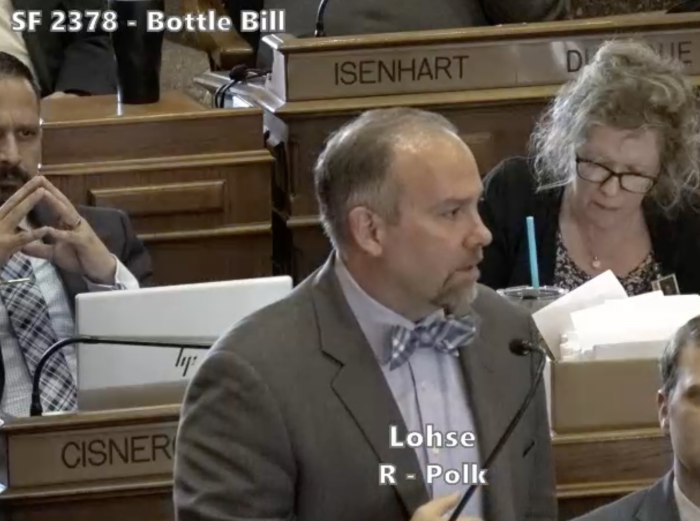 Iowa lawmakers have amended the state's recycling law for the first time since its passage in 1978. Senate File 2378 changes what is commonly known as the "bottle bill" in ways that will please beverage distributors, retailers, and redemption centers.

In a mostly party-line vote on May 23, the Iowa Senate concurred with the version of the bill House members approved last month. Governor Kim Reynolds has not publicly commented on the proposal but is expected to sign it into law.

Legislators who voted against the bill warned that it would harm consumers and reduce recycling.

Iowa lawmakers have periodically debated bottle bill reforms for at least two decades. Most of those proposals would have increased the redemption centers' take from 1 cent per container, which has long been unsustainable. Some bills would also have extended the 5-cent deposit from beer and soft drinks to bottled water, tea, juice, and sports drinks.

The final version of Senate File 2378 does increase redemption centers' handling fee to 3 cents per can or bottle. But it doesn't greatly expand the kinds of beverages that will have a deposit; only high-alcoholic-content beer and canned cocktails will be added to the list.

The biggest change is that retailers will easily be able to opt out of accepting can and bottle returns. Current Iowa law requires grocery stores to participate in the program, but some (such as Fareway stores) stopped taking containers back. They have faced no consequences for flouting the law.

The bill headed to the governor spells out several ways retailers can decline to take cans and bottles back:

When the House debated the bill on April 12, Democratic State Representative Mary Mascher warned that the timeline was unrealistic. The idea of mobile redemption centers may sound appealing, but "There's no way this system can be up and running" by the time the law would go into effect on July 1.

Mascher also predicted that it would be hard to find workers to staff redemption centers or new ones. She warned that many low-income Iowans depend on money from can and bottle returns to put food on the table. "Convenience is the key; they need to be able to recoup those dollars immediately." That won't be possible if grocery stores aren't involved.

When the Iowa Senate debated the bill on May 23, Democratic State Senator Bill Dotzler noted that virtually every grocery store will be able to opt out, because all of them have to keep some food (such as rotisserie chicken) at a safe temperature. In addition, the bill doesn't require retailers to accept container returns if there's no redemption center within a certain number of miles. He characterized the legislation as the "first step" toward eliminating the bottle bill.

Dotzler was skeptical that many new redemption centers would open, because the 3-cent handling fee may not be increased again for many years, and the business might not be profitable.

Along those lines, Democratic State Senator Joe Bolkcom argued that the "special interest bottle bill" would help existing redemption centers but let sellers of beverages "off the hook." Consumers will continue to be charged the nickel on every can or bottle, but fewer containers will be recycled, which will enrich the beer and soft drink distributors. Bolkcom said that "massive windfall" has been estimated at $40 million to $50 million a year: "What a sweet deal to our beverage distributors." (The bill does not allow the state to collect data on unredeemed deposits.)

Not only that, Bolkcom noted that the bill gives distributors a 1-cent tax refund for every beer can returned. They can also keep the scrap aluminum, "which is worth millions of dollars."

The House Republican floor manager Brian Lohse, who owns a grocery store himself, denied last month that the bill would reduce recycling. He claimed during the House debate that thanks to the increased handling fee, there are plans to open additional redemption centers, and he anticipated more of that in nearly every county. "That's my hope," he added.

During the Senate debate, floor manager Jason Schultz was similarly optimistic, predicting the bill would lead to "many many more locations to redeem" once it goes into effect. He acknowledged that grocery stores were not going to need to take containers back, but claimed the mobile redemption centers would give Iowans plenty of options.

It's worth noting that mobile redemption centers won't provide cash in exchange for cans and bottles. Rather, money will periodically be transferred to checking accounts, when a sufficient balance has built up. The model excludes Iowans who don't have a bank account. Nor is there any guarantee the mobile centers will be accessible to people lacking transportation. In some Iowa cities, grocery stores are on bus lines.

Despite the bill's flaws, most House Democrats joined Republicans to pass Senate File 2378 by 73 votes to 17. Three Republicans joined fourteen Democrats to vote against the bill (roll call).

The Senate vote was much more partisan. All 30 Republicans who were present voted yes, joined by Democrat Kevin Kinney. Democrats cast all fifteen no votes (roll call).