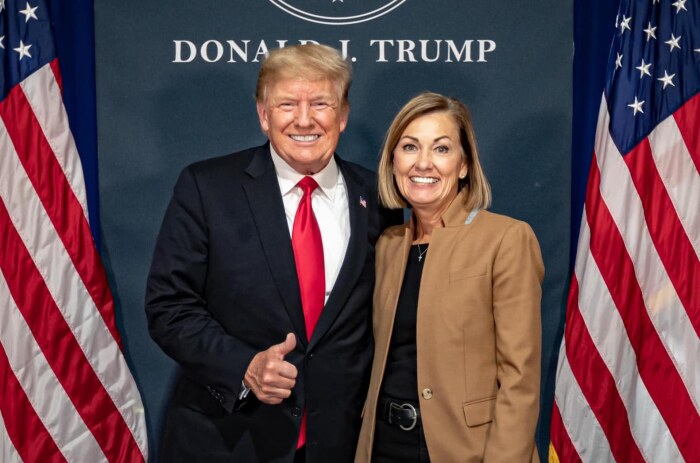 In the immediate aftermath of the January 6, 2021 coup attempt, Governor Kim Reynolds condemned the attack on the U.S. Capitol and called for prosecuting those who incited violence "to the full extent."

But as a U.S. House Select Committee uncovers more evidence of former President Donald Trump's apparent criminal conspiracy to subvert the peaceful transfer of power, Reynolds is "not paying any attention" to the investigation, she told reporters this week.

Like most prominent Iowa Republicans, Reynolds avoided admitting that Trump lost the 2020 presidential election. She endorsed a meritless Texas lawsuit seeking to throw out results from four states Joe Biden won. And even after January 6, the governor implied that many people had valid concerns about the "integrity of our election process."

But Reynolds tried to distance herself from the attack on the Capitol. Speaking to members of the Iowa Capitol Press Association via Zoom on January 7, 2021, Reynolds began by saying,

I want to take this opportunity to, again, just condemn the actions of those who stormed our nation's capitol and chose to incite violence yesterday. It's unacceptable, and they should be prosecuted to the full extent. That's not how we resolve our differences in the greatest country on earth, and it absolutely is not who we are as Americans.

Reynolds added that "we all have a role to play in dialing down the rhetoric," and called for working together "to move forward" as a country.

Trump never dialed down his rhetoric, of course. He continued to lie frequently about election fraud—including at an October 2021 rally in Des Moines, where Reynolds "gushed with praise" for the former president.

Hundreds of Trump supporters who breached the Capitol are being prosecuted or have pled guilty to related crimes. But the House Select Committee has focused on the criminality at the top of the food chain. Evidence presented during this month's televised hearings has shown:

Reporters asked Reynolds on June 29 whether she's been following the January 6 hearings. From Katarina Sostaric's story for Iowa Public Radio:

Reynolds also said she is “not paying any attention to” congressional hearings about the January 6th, 2021, insurrection at the U.S. Capitol.

A former White House staffer testified Tuesday that former president Donald Trump said he knew people had weapons that day and still asked them to march to the Capitol.

Reynolds, a Republican, was asked if that changes her support for Trump.

“That’s all speculation. I’m not paying any attention to that,” Reynolds said. “We have gas prices that are double what they were. Inflation is at a 41-year high. Parents are trying to get through a day and hope that their paycheck can help them take care of their family and buy the items that they need. We don’t even have formula for moms to feed their babies. We’re flying that in from other countries.”

She said people should be taking an interest in those issues and in President Joe Biden’s U.S.-Mexico border policies.

So much for holding those who incited violence accountable.

Reynolds said she was honored early this month, when Trump formally endorsed her re-election bid.

Iowa's Republican members of Congress have similarly not acknowledged any revelations from the January 6 hearings. Like Reynolds, they have highlighted inflation, border security, and other political controversies in their public comments and social media posts.

Senator Chuck Grassley, who was mentioned in some of the coup plotting documents, told interviewer Bob Leonard this month that he's not following the January 6 investigation. The select committee's findings so far have undermined Grassley's past excuses for Trump's conduct.