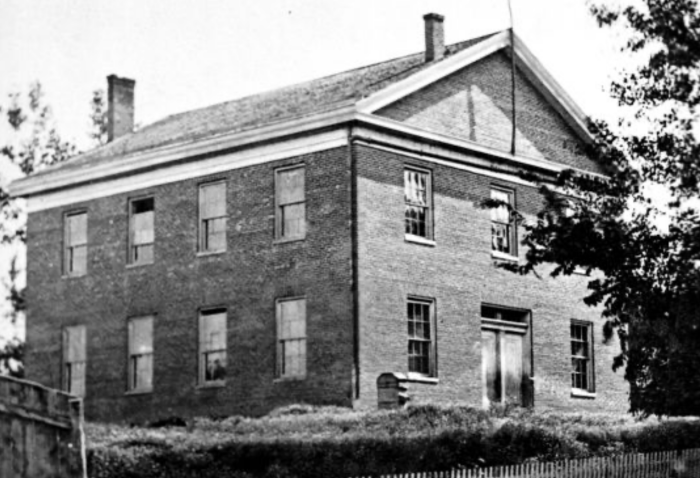 The name of Susan Clark Junior High is meant to evoke a 12-year-old student and her father who sued a school board in 1867. Iowans celebrate the resulting state Supreme Court decision for ending separate-but-equal public education in our state.

The idea came out of another naming: the Alexander Clark Room atop the Merrill Hotel. The keynote speaker at the February 2019 dedication, a University of Iowa law professor, urged listeners to notice that Clark did not leave the girls behind.

“He did not say, ‘Maybe I’ll push it later when I’m trying to get Alexander in.’”

Dr. Adrien Wing said a plaque at her college honors Susan’s little brother Alexander (Class of 1879) as the first Black person to receive a law degree from a college west of the Mississippi River. The second was their father (Class of 1884).

“For back then, that was totally revolutionary for him to say I’m going to have Susan be the plaintiff, and I want her to have a good education.”

Sitting in the audience, retired school counselor Suzanne Thielmann knew the Board of Education was seeking community input for a school name.

“Let’s name it for Susan!” she said. “Think what it was like to be Susan.”

If this story were fiction, my narrator would be her older sister Rebecca. I try to picture race relations before and after the Civil War through her eyes.

“The colored population of this place, numbering about seventy, held a meeting … and appointed A. Clark (barber) a delegate to represent them in the National African Convention which assembles in Rochester, N.Y. …” (Muscatine Journal, July 1, 1853)

Born in 1849, Rebecca was a toddler when her father made that journey. Imagine her point of view while she is growing up and he is moving into ever more visible roles.

In September 1862, one week after her 13th birthday, President Abraham Lincoln issued the preliminary Emancipation Proclamation. Imagine the excitement at the “African” school she’d probably been attending since it began at her church in 1856.

“Alex. Clark passed down on the Kate Cassel…for Keokuk, with forty recruits for the colored regiment, which he obtained at St. Paul and Fort Snelling.” (Muscatine Evening Journal, Octover 5, 1863)

Then President Lincoln got murdered on Good Friday. Imagine the sadness.

In the immediate aftermath of the Civil War,  however, the black community determined to make an indirect challenge to segregation: the AME congregation informed the school board that it would no longer house (and financially support) the school. Soon afterward black families brought their children to the city’s tax-supported white schools.

Alexander wrote a letter the Muscatine Journal published on September 12, 1865:

I will further state that it is not the desire of the colored people to overrun the white schools with their children if they are supplied with a good, competent school for their children; neither have any of them sent their children to the white schools except myself. I sent my three children to No. 2 on Monday, September 4th, after informing the president of the board of school directors that I would send them until a colored school was provided. Mr. Hoopes, the gentlemanly principal of No. 2, received my children and treated them as he did the other scholars. But, alas! on Tuesday night the board of directors met and passed a resolution dismissing my children from school, and on Wednesday morning Mr. Hoopes came to my house and informed my children that they had been dismissed from school. Thus are my children dismissed without cause or warrant of law, merely because they are colored....

Several accounts say Rebecca, like her siblings, eventually graduated from Muscatine High School—but the records for that time were lost in a fire, so we can’t prove or disprove if or when she may have attended.

However, in spring 1867, she is one of eight Muscatine students reported attending Grinnell College (the unofficial new name of Iowa College, founded at Davenport in 1848 by the missionaries of the Iowa Band of Congregationalists). The catalog shows her in the preparatory department. Pastor A.B. Robbins of Muscatine had served as president of Iowa College throughout its 17-year existence. Two of his children are listed, too.

“The wedding took place in the African Church at 6 o’clock, the ceremony being performed by Rev. A.B. Robbins, the Congregational pastor. … The bride was born in Muscatine and has been liberally educated.” (Muscatine Journal, Oct. 11, 1872)

Was Rebecca Clark the first Black woman to attend Grinnell? If so, that’s big.

Top image: Muscatine Grammar School No. 2, circa 1877, in a photograph by J.G. Evans available through the Upper Mississippi Valley Digital Archive.