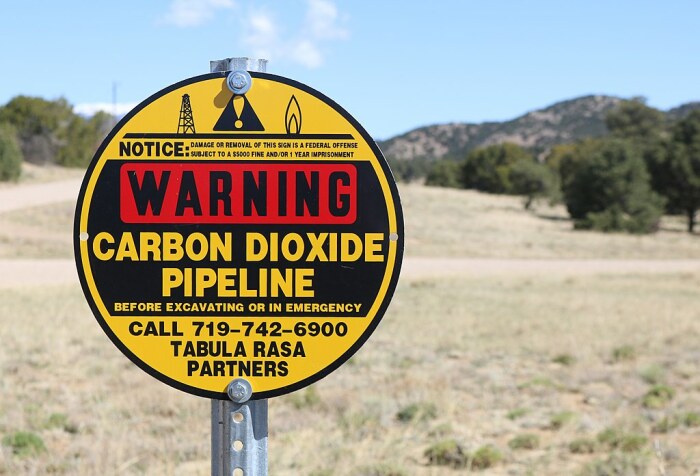 Another kind of inflation: economic benefits of CO2 pipelines

Silvia Secchi is a professor in the Department of Geographical and Sustainability Sciences at the University of Iowa. She has a PhD in economics from Iowa State University.

There is a long tradition of industry proponents overselling the economic benefits of pipelines by paying for economic impact studies.

Two kinds of goals drive this practice. The first is to increase the social acceptability of the pipelines, which often require formal environmental assessments because of their long and short-term environmental effects. Local landowners and environmental groups often oppose the projects, concerned about impacts on existing infrastructure like tile drainage, and on water and land resources. Second, if the pipelines are in line for subsidies, such studies help create the impression that the subsidies are justified.

The inflated economics reports go back to the Trans-Alaskan pipeline in the 1950s and early 1970s, and the more recent infamous examples of the Keystone XL and the Dakota Access pipeline. The tricks in the consultants’ playbook have largely remained the same.

In this post, I will discuss several issues associated with the report that Ernst and Young prepared for Summit Carbon Solutions.

First of all, the report states that “EY conducted the analysis presented in this report based on data provided by Summit. Summit provided EY with construction-related costs, hiring and salary data during Project construction and pipeline operation."

In other words, the foundational information for the report has not been independently vetted, and was produced by the very entity that would benefit from inflated economic impact results.

This is a time-honored tradition. Professor John Crompton from Texas A &M writes (unfortunately, this great article is paywalled):

By hiring consulting firms with nationally respected names, sponsors also are buying the aura of respect and integrity that accompanies the consultant’s name, anticipating that this will enhance the credibility and public and political acceptance of the results and quell any questioning of the procedures used. How might such consultants retain and protect their reputations when they use inappropriate procedures to give clients the large-dollar impact number that sponsors usually are seeking? Two strategies are used widely. First, extensive qualifiers are likely to be inserted into the report. A second strategy for protecting consultants’ reputations often is found in the cover letter accompanying a final report, as the following extract illustrates:

It should be noted that the analysis utilizes assumptions that were developed based on our market analysis, surveys with comparable arenas, hypothetical lease terms, and conditions and assumptions provided by the City and the developer.” (Deloitte and Touche 1997, emphasis added).

Thus, the consultants offer no critique of the legitimacy of the assumptions given to them by the project’s strongest advocates but merely accept the assumptions as a given irrespective of how outrageous they may be. These explicit and extensive qualifying statements invariably receive no visibility in the ensuing publicity announcing the report’s results, as advocates tout only the outrageously high numbers that typically emerge. These qualifiers provide the loophole that enables consultants to make unreasonable assumptions, engage in doubtful procedures, and announce mischievous results.

Here is the fine print disclaimer in the report that Ernst & Young LLP prepared for Summit (emphasis added):

The services performed by Ernst & Young LLP (EY US) in preparing this report for the Summit Carbon Solutions were advisory in nature. Neither the report nor any of our work constitutes a legal opinion or advice. No representation is made relating to matters of a legal nature. Our scope of work was determined by Summit and agreed to by EY US pursuant to the terms of our engagement agreement. Certain analyses and findings in this report are based on estimates and/or assumptions about the cost of construction and operation of the Summit Carbon Solution’s pipeline project. The findings and analyses contained in the report are based on data and information made available to EY US through the date hereof. Should additional relevant data or information become available after the date of the report, such data or information may have a material impact on the findings in the report. EY US has no future obligation to update the report.

Bleeding Heartland readers may be interested in knowing that there is a growing literature on “mischievous results” of these commissioned, non-peer reviewed economic impact studies.

Second, the report obfuscates how many jobs would be created, for how long, and where, by using worker years (a method Dave Swenson already thoroughly debunked in the case of the Dakota Access pipeline), not clearly articulating the changes between the transitory 2022-2024 construction period and the operations period starting in 2025, and not being clear about whether employees in the construction phase will be coming from outside the region (or from out of state in each of the states).

Let me give you specifics by looking at Summit employees as an example.

The construction-period jobs are mostly in Iowa, but the operation jobs are distributed across the five states as illustrated in the table below. So, Summit plans to have 200 to 218 people working on the project in Iowa in 2024 (the range depends on how many of the average six employees in North Dakota will be working in 2024) and fire or relocate out of state more than three quarters of them (the range is from 200-47=153 to 218-47=171) in 2025.

The use of worker years and even that of yearly averages mask the temporary and quickly changing distribution of these jobs, making them appear more stable than they are. It is also not clear how many of the Summit employees engaged in project oversight in the construction phase would be hired from out of state, given the specialized and short-term nature of the jobs.

The issue of how many of the workers would be coming from out of state is even more important in the case of contractors. For example, in 2021, in Iowa there were 53 outfits operating in the oil and pipeline construction business, employing an average of eight people each, according to the Bureau of Labor Statistics.

In the whole five state region there were fewer than 5,800 workers in the industry, while the EY report projects that 4,240 construction workers and almost 1,000 professional/technical workers would be needed. In all states but Minnesota and North Dakota, these oil and pipeline construction businesses are very small (fewer than ten employees) and likely not well qualified or interested in the project.

The report does not specify what assumptions were made in regard to where the workers would be coming from. This is critical because out-of-state workers do not spend as much of their salaries in-state as local workers. Thus, the induced economic contributions (the money the contractors and Summit employees would spend in the region) could be substantially lower than projected. Notably, even the study commissioned by the Dakota Access LLC made these assumptions clear.

CONSTRUCTION MATERIALS MAY NOT BE PRODUCED LOCALLY

The report is also unclear about the where the highly specialized construction materials would be coming from. It states, “Due to the purchase of construction materials and services in states beyond the five pipeline states, Summit’s Project construction activities will generate $1.5 billion in output across the remainder of the United States cumulatively between 2022 and 2024.”

The assumptions about the construction materials need to be made explicit, because if one incorrectly assumes that, for example, a high percentage of them is produced locally while it is not, the induced effects will again be inflated and the overall impact will be higher than it should be.

The overestimation of the effects is compounded by the use of a national model instead of one limited to the states where the pipeline will operate. This is not standard practice. For example, a working paper quantifying the economic impacts of CO2 pipelines for enhanced oil recovery in Wyoming only uses a Wyoming IMPLAN model. A study looking at the projected impacts of FutureGen – a now defunct project that would have implemented carbon capture and storage for a coal plant – only used the county where the project was to take place to estimate economic impacts.

TAX ANALYSIS IS CONFUSING AND INCOMPLETE

Fourth, the report uses the IMPLAN model to generate tax impacts. This is not standard practice. IMPLAN-based studies do this outside the model, and allocate the various taxes (payroll, sales etc.) to the appropriate geographical unit. This is how the study commissioned by the Dakota Access LLC conducted the fiscal analysis, and how Colorado estimated the public revenue from the oil and gas industries in the state, for example.

The EY report’s approach – which includes “Total tax contributions” (Direct + Indirect + Induced) is confusing and its numbers cannot be compared to those of other studies.

Notably, as the report itself acknowledges, the tax analysis ignores that those tax payments would be offset by federal and state subsidies: “The analysis does not include tax impacts derived from Section 45Q, which provides an annual federal tax credit for the sequestration of carbon dioxide. Summit estimates that the value of such credits will be $414 million in 2025.”

As taxpayers, the analysis that matters to us is whether this is the most cost-effective project public funding should be used for. Would those $414 million be better spent elsewhere if we want to mitigate climate change? Arguably that is the reason why the public funding is there in the first place, so we should really consider alternatives.

Of course, we need to consider the environmental impacts the various alternatives as well, but that is a story for another day.

Finally, I want to make clear that I am the sole author of this post. I have of course read Dave Swenson’s reports and writing, and I cited them here when appropriate. But the industry would do well to leave him alone and stop harassing him.

I also note that have received no compensation for my work on the pipelines, and I intend to continue to do so in the future for all my public scholarship and outreach contributions. In fact, since I moved back to Iowa, I determined not to accept any consulting money, given the pervasive and pernicious problem of industry entities funding academics. I believe that practice creates at minimum the appearance of a conflict of interest, and that consulting funding needs to be clearly disclosed whenever academics write or speak about controversial issues that powerful lobbies stand to benefit from.